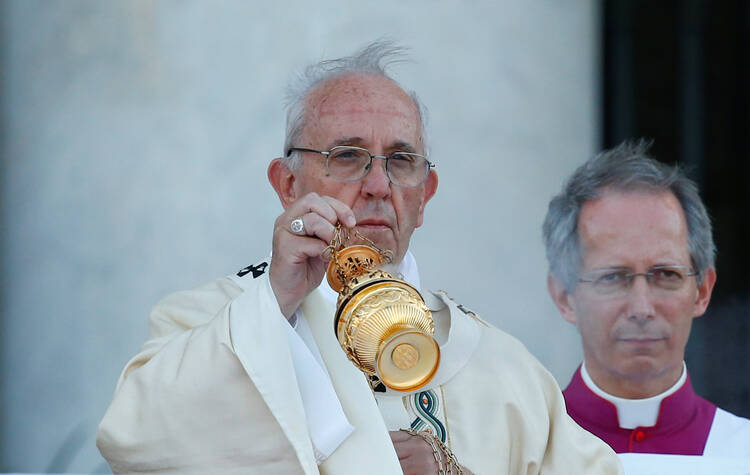 Earlier this month I spent a weekend with a group of permanent deacons as part of their continuing education. There were a few younger men in the group, but most of the deacons were in their 60s and 70s. We talked about a number of theological issues, and eventually our conversation drifted toward the liturgy.

When I mentioned that I have a number of undergraduate students who love the Extraordinary Form, many of the deacons were shocked. Particularly incredulous were those who lived through the pre-Vatican II liturgy. They did not experience the liturgy as beautiful. They experienced it as boring and incomprehensible and felt distant from what was taking place at the altar. That anyone, let alone young people, could find the Extraordinary Form attractive left them bewildered. These were men who had found life in the liturgical reforms under Pope Paul VI. Why would anyone want to go back?

The Tridentine Mass: Why I Couldn't Go Back
Peter Schineller

The students who have found a liturgical home in the Extraordinary Form represent a vibrant and vocal group of people, young and old, who prefer the old Latin liturgy to the Novus Ordo. Many of these people had only experienced the fruits of post-Vatican II liturgical reforms prior to discovering the Extraordinary Form. When they experienced the Latin liturgy in its beauty and solemnity, many felt like they had discovered a hidden treasure and wondered how and why the church ever reformed something so profound.

In an address last week on the liturgy, Pope Francis drew attention when he asserted “with certainty and with magisterial authority that the liturgical reform is irreversible.” Reaction focused almost entirely on this one sentence to the neglect of the rest of the address, much of which contained important comments on liturgical renewal.

In the address, Pope Francis provided the historical background to liturgical reform, emphasizing that many Catholics, from laypeople to bishops, were discontent with the liturgy and understood that renewal needed to occur. He noted that the liturgical movement predated Vatican II and that popes prior to the council were compelled to respond “to the hardships perceived in ecclesial prayer.” There was a sense that the liturgy was not “a living liturgy” and that the church’s prayer lacked full and active participation of all the faithful. In short, the pre-Vatican II liturgical landscape was not the utopia that some traditionalists seem to assume it was.

Reform was necessary, which appears to be his point when referring to the irreversibility of that reform. However, the address demonstrates that Pope Francis does not view the irreversibility of liturgical reform to mean that the post-Vatican II changes are final and complete. He states that the council “responded to the real needs and the concrete hope of a renewal” in its constitution on the liturgy, “Sacrosanctum Concilium.” But this constitution was only the beginning of the renewal. Indicating that he understands the current state of the liturgy to require further reform and renewal, Pope Francis argued that the process of reform takes time and that it is necessary to address more fully the “liturgical education” of all the faithful. By this he means that all the faithful need to understand what the liturgical movement endeavored to accomplish, why it advocated for renewal and how Vatican II sought to address the movement’s concerns.

Underlying Francis’ reminder that the reform continues and his call for liturgical education is, it seems to me, a recognition of the shortcomings of the renewal movement. That is, even while reminding them that the process of liturgical reform is irreversible given the deep discontent that was the impetus for this reform, Pope Francis seems to take seriously the liturgical dissatisfaction of those like my students and others.

Few can read “Sacrosanctum Concilium” and fail to see the disjunction between the renewal as sought by the council fathers and the shape that renewal took in the decades after Vatican II. Not only are questions raised about the aesthetic impoverishment of the liturgy, but many wonder whether the reform truly led to the full and active participation desired by the council. And it is more than just traditionalists who raise such questions.

In his address on the liturgy, Pope Francis seemed to acknowledge this dissatisfaction, and so urged the church as a whole to return to the sources of the renewal, focusing particularly on the writings of those in the liturgical movement and the clarion call for renewal of “Sacrosanctum Concilium.”

It is unfair to see Pope Francis' address as a smackdown of traditionalists and their concerns.

While it is clear that Francis does not see a return to the Tridentine Mass as providing the answer to the church’s liturgical renewal, it is unfair to see his address as a smackdown of traditionalists and their concerns. I would argue that the pope’s address was primarily a call for a renewed reform faithful to the sources of the liturgical movement. Far from being words that should tear us apart, his exhortation to renewal should be welcomed by all.

I love the liturgy and in parishes I have served I've experienced beauty and grace, however I am excited about how we could further reform the liturgy. But how would this be conducted? Would ordinary people be able to participate?

I did not find the Latin liturgy inspiring, so I am puzzled as to what people see in it. I object to the forms and dress of the pre-Vatican II era because the Church was so blatantly and unapologetically sexist in those days. Vatican II brought necessary changes and gave women a chance to participate more fully in the celebration of the Mass. Women need to have a still greater role in the Mass - primarily, women need to be allowed to preach. The Church needs to hear the perspective of women as much as women need to see and hear other women speaking publicly at the principal liturgy.

As a Catholic priest, I thoroughly agree with LIsa Weber. I welcome the voices and wisdom of my sisters in the faith, as well as of my non-ordained brothers.

Alan,
You can hear that wisdom anytime you want, just have a conversation with them.
But until Saint John Paul II's "Ordinatio Sacerdotalis" is revoked, you won't be hearing
them give Sermons every Sunday.

Lisa,
If you think the Church was blatantly and unapologetically sexist in those days before Vatican II.
[One can wonder if someone or thing is blatant, why they would be apologetic and if unapologetic why they would not be blatant in thought, word and deed, but that is a matter for another day. ] and that the Old Mass caused that sexism
you are putting the cart before the horse.

The Church is not going to change because you change the liturgy.
Nuns used to read at Mass before Vatican II.
Some Mother Superiors used to Preach at Mass, some even wore a mitre and had a crozier.
If there were to be women priests, are you saying they should never celebrate at an Old Mass ?

I was a youngster during the Second Vatican Council, so I don't recall the Tridentine Mass at all. I do as a child remember my Grandfather attending the Novus Ordo Mass with my family once, and he prayed the rosary throughout the liturgy. The rosary is a beautiful prayer, but as Pope John XXXIII urged, "Don't pray at Mass, but pray the Mass." I agree that one advantage of the post Vatican II Mass is greater participation by the laity, both those worshipping in the pews, and those participating as readers, particularly women. However , I have attended on more than a dozen occasions a Tridentine Mass, and was impressed by its greater reverence than I've often experienced at different Masses. At first I found the Latin to be off-putting, but when I read along with the English translation, I could then understand the liturgy. I don't get particularly dressed up for Mass (no suit jacket or necktie) but I am dismayed when I see people wear sports jerseys or T-shirts. Although I certainly agree with the option of receiving Jesus' consecrated Body in the hand, I've often seen people receive Holy Communion in the hand and put our eucharistic Lord into their mouths which as much reverence as eating gum. Also, the readings, Gospel, and homily in the Tridentine Mass I attended were in English, and the priest gave a homily rich in explaining the meaning of the readings. Unfortunately, I have heard homilies that were poor in terms of explaining the symbolism of the author's words in the readings, and so were not inspirational in the least. Overall, I see the "Latin Mass" as being a beautiful means of worship of God. I might add that I'm "only" 55 years old, and attended the Tridentine Mass when I was in my early forties.

Your account seems to be a wonderful example of the need for the mutual enrichment between the two forms that Pope Emeritus Benedict called for. Specifically here, the reverence of the Extraordinary Form should inspire the same reverence in the Ordinary Form, and the full and active participation that Vatican II reiterated should also influence the Extraordinary Form so that those who attend don't merely "pray at Mass, but pray the Mass."

I like this take on the Pope's commentary, and I admit that I have not read his words. My thoughts are these: when Missouri Synod Lutherans have a more solemn and reverent communion service , with the congregation receiving the Eucharist on their kneesa at a Communion rail, with a solemn but bold declaration that they are about to receive the body of Christ we have to think what additional reforms our liturgy needs.

I like this take on the Pope's commentary, and I admit that I have not read his words. My thoughts are these: when Missouri Synod Lutherans have a more solemn and reverent communion service , with the congregation receiving the Eucharist on their kneesa at a Communion rail, with a solemn but bold declaration that they are about to receive the body of Christ we have to think what additional reforms our liturgy needs.

Can someone please explain to me the need, if there was a need,
for the Old Mass to be suppressed in the years after Vatican II ?

Why couldn't the People of God be allowed to go where their
Souls moved them and where the Liturgy renewed them ?