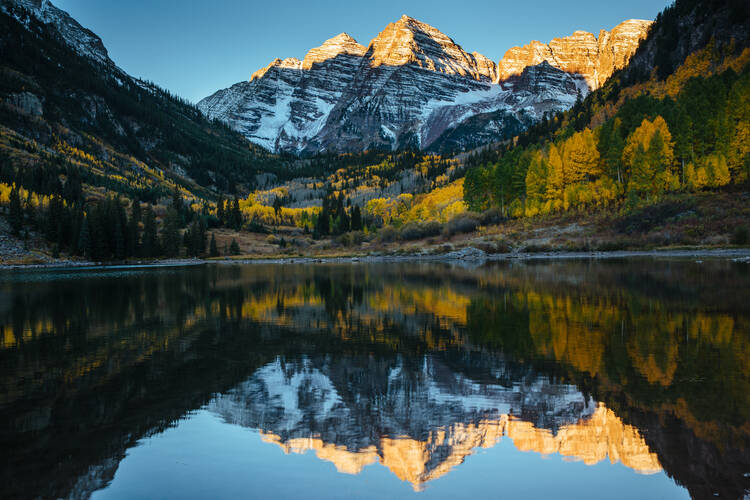 I had not been backpacking in years and my son Pieter, 12, had done it only once, but when friends asked if we would like to join them in the Rockies, I signed us up on the spot. I envisioned a time of bonding and, for him, a rite of passage.

Then the worries set in. While I had experience and our friends, Lisa, Kevin and Emily, had even more, I knew there are no guarantees in the mountains. Four days, four mountain passes, all of it up around 12,000 feet. What a shame if it reduced to a blister-bitten slog through the heat or rain. I was determined to give Pieter a good experience. He did not give it much thought. “You know I don’t like to hike,” he protested. He looked forward to eating lots of Sour Patch Kids on the trail and visiting Las Vegas after the hike.

After months of imagining worst case scenarios and a long flight and drive, we arrived at the trail. We took a quick photo in front of the Maroon Bells and started climbing. I was surprised by the green aspen grove and low-lying willows. I was also surprised to hear Pieter say, “I can’t breathe.” His backpack needed adjusting, but then he proceeded without complaint. We ate lunch at Crater Lake and finished the day just below West Maroon Pass. I knew the next day would be one of the toughest, since we would traverse two passes. But for now, Pieter enjoyed putting up the tent and making the fire. At dusk, as we got into our sleeping bags, I thought, All right! This is going to work out just fine. Then Pieter said, “Dad, I want to go back.”

Now if Cravath, Swaine and Moore need a new litigator, they could hardly do worse than my son. Because if there is even a hint of a hole in your argument, Pieter will find it. But I was game. “Why do you want to go back?” I asked.

“Because I’m miserable,” he said. “And now we can still turn back. I don’t want to do this for three more days. I can’t do it, and I hate it.”

Maybe the main reason for our being here was that I wanted to prove I still could do it.

Not bad reasons, I had to admit. Why were we here, really? I started to wonder as his words sank in. It had been great telling friends we were going to be mountain kings, but Pieter had never wanted this. Maybe the main reason for our being here was that I wanted to prove I still could do. This was my thing, not his. And now that we were here, I could see that the risks I had foreseen were real. A sign at the trailhead warned: “The beautiful Maroon Bells and their neighbor, Pyramid Peak, have claimed many lives in the past few years. They are not extreme, technical climbs, but they are unbelievably deceptive. The rock is downsloping, rotten, loose and unstable. It kills quickly and without warning.” Lisa, Pieter’s godmother, had told me we could back out at any time. And Pieter had a point: This was supposed to be a vacation. You know, fun?

“Exactly,” he said. “I’ve shown I can do it. Now let’s go back.” But I was done listening. I didn’t argue; I just told him, “We’re not quitters, and we don’t quit on our friends.” On the inside, I continued to harbor doubts.

I thought we were done with the matter, but parents are often deceived in this way. As we fell behind the next morning, Pieter weighed in again with his plea to turn back. Granted, I was not having much fun either, being constantly worried about his enjoyment and safety. The scenery had hardly registered, and apart from dinner I had barely spoken with our friends. Maybe it wasn’t worth it. In any case, he was right about one thing: If we were going to quit, it had to happen now.

Pieter stayed angry at me for the rest of the morning. But come rockslide or moose attack, we were pressing on. Now resigned to finish, Pieter made good time. Thankfully the views at West Maroon Pass and Frigid Air Pass rewarded our effort. A narrow perch atop a mountain leaves no doubt you have done something remarkable. That evening at dinner we were all exhausted but happy knowing we had reached the halfway point of our journey.

A narrow perch atop a mountain leaves no doubt you have done something remarkable.

Day three began with ice on the tent. I grabbed some coffee and came back to rouse the boy. “Wag it and shag it, my friend!” He rolled over and burrowed deeper into the bag. “Come on, buddy, we gotta get movin’.” Ten minutes out we again lagged behind the rest. Pieter swore and said, “I can’t do it.” Then he grabbed my pack from behind to slow me. As I pulled away, he fell face down into the dirt, buried under his gear.

“Call an ambulance,” he said. I could see he was not injured and knew that for Pieter a helicopter rescue would be the perfect end to our misadventure. I wanted to laugh, though I could just as easily have cried. I explained coolly that the Forest Service does not airlift people who can walk out themselves. “We have no choice,” I said. “I’ll wait until you’re ready.”

Despite its strong association with rugged individualism, one of the best things about backpacking is the people you meet. They are a source of information, encouragement and mutual aid. In our case, I was particularly grateful for the praise that regularly came Pieter’s way. “Look at that stud!” one woman said when she saw his backpack. And indeed, in four days, he was the youngest person we saw with a pack with one notable exception: There was a totally crazy family with four kids under 12, all wearing packs. I am sure Pieter appreciated the admiring words, but as a motivator, praise only goes so far. Candy, on the other hand—I was still kicking myself for forgetting it. Nothing gets a kid up a trail like candy. For all my planning, I had left it behind. Trail mix is no substitute. I was a really bad dad.

But sinners are given saviors. At one point we fell into conversation with a woman and her 70-year-old mother. Turning to Pieter she said, “You want some gummy bears?” He eagerly cupped his hands. “Now when you see my boys,” she said, “you say, ‘Hey dudes, I hear you’ve got some Starburst.’ They’ll be happy to share.” Indeed they were. Pieter charged ahead and arrived at Trail Rider Pass 20 minutes before I did. When I finished the climb, I found him sprawled on the ground, enjoying the sun.

End of the trail

On the last day, Lisa and I hiked together. Pieter had popped right out of bed and now led the way with Kevin and Emily. Feeling the cumulative exhaustion, I stopped often to catch my breath. To keep my balance I turned and looked out over the slope I had just climbed. Look at all you miss when you’re only focused on the steps ahead, I thought.

Lisa caught up and said, “Isn’t it magnificent? God is here.” I told her I’d had a similar thought the night before. While praying Psalm 23, I had been struck by the familiar words: “Even though I walk through the valley of the shadow of death, I shall fear no evil. For Thou art with me.”

“You know, even though this is the hardest thing I’ve ever done physically, the physical part has been the least of it,” I said. Lisa knew what I meant. “It’s a teaching trail,” she said.

Pieter was the first to Buckskin Pass and the first to the parking lot. I still was not sure I had done the right thing by bringing him along. But I was glad, whatever I had done, that God had been around to bring up the rear. 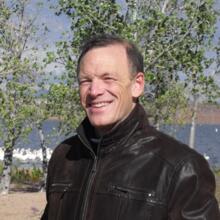