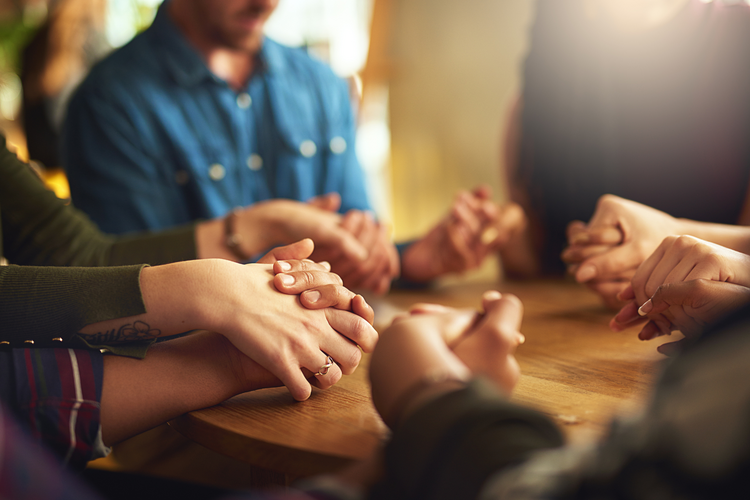 Dad, at the wheel. “See that sign, kids? When we pass that, we’ll be in Oklahoma.”

“This is where you grew up, Grandma?”

“It sure is, just a few more miles south of here.”

Not one for impromptu science lessons, Dad replied, “Because...it’s Oklahoma!”

We were on our way to Weatherford, Okla., to visit Grandma Klein’s kin, the Hamburgers. We weren’t in Kansas anymore.

The old man had a beard, like Abraham Lincoln. The women wore those floral dresses like Grandma Klein did, and in Oklahoma, at least back then, there was no hairspray. We ate outside, in a grove of trees, on some grass and red dirt—but not on a Sears-Roebuck picnic table like we had at home. No, they carried the dining room table out there, along with the chairs. They even put a tablecloth on it!

What is it about evangelization that terrifies Catholics?

It was summer on the prairie, so I have no doubt but that we ate fried chicken, cucumbers in vinegar, sliced tomatoes and lots of potatoes. No one ever ate a meal without potatoes, in any season of the year, in either Kansas or Oklahoma.

Strange thing, there was a huge book at the other end of the long table, where the bearded man sat. He opened it up. Everyone bowed their heads, and he read from the Bible. Then he asked God to bless Grandma and her family, and he thanked God for bringing all of us down from Kansas.

When we raised our heads, one of the women asked my mother if her children were accustomed to praying before meals. That is probably because my head never went down.

Without saying a word and without looking at any of us, while still looking straight at the woman, my mother made and intoned the sign of the cross. All of us kids did the same. So did Dad. Even Grandma Klein did. She was a “when in Rome...Methodist.”

Bless us, O Lord, and these thy gifts, which we are about to receive from thy bounty through Christ, our Lord. Amen.

Then another solemnly intoned sign of the cross, as if to underscore that this sort of symmetry of sound and motion did not come without sustained repetition.

My mother didn’t say anything else. She hadn’t frowned as if offended. Maybe she sported the slightest of smirks, something like Patton, pleased that the enemy had deployed on the very ground that she had anticipated.

The other woman quickly proffered surrender, “My, but that is lovely. Look how the children pray, Edgar. They all know their prayers.”

“Pass the potatoes.” Prayers, yes. Manners, no. Oklahoma Protestant had met Kansas Catholic. Each had held their ground. Now it was time to eat so that we could get to the pie.

What is it about evangelization that terrifies Catholics? There has never been a church leader who didn’t call for it, beginning with Jesus.

Go, therefore, and make disciples of all nations, baptizing them in the name of the Father, and of the Son, and of the Holy Spirit, teaching them to observe all that I have commanded you. And behold, I am with you always, until the end of the age (Mt 28:19).

But these days the pastor rallies his troops for the great charge of evangelization and then gallops off alone, everyone wishing him the very best from the safety of the trenches.

Perhaps we all want to insist: I am not that good with people, especially strangers; I am no good at arguing; and I just wouldn’t know what to say.

Evangelization does not happen between strangers.

That’s okay. You don’t have to be great with people. Evangelization does not happen between strangers. We don’t need debaters, because arguments, however brilliant, almost never move hearts. Don’t fret about what to say. What we say isn’t nearly as important as what we do. Look carefully at those three concerns.

What we say is not nearly as important as what we do. Who of us can remember what the young Mormon men said to us when they last knocked on the door or stopped us on the street? The sales pitch has slipped from memory, but weren’t we impressed by such clean-cut, young men, in white shirts, walking their way through town? What they were doing mattered more than what they said. For me, Mormonism withers when its doctrines are examined, but it blossoms out in the examples that its families offer to the world.

Follow the Mormon example of doing. Share your Catholic faith with others by being yourself, by being Catholic, especially when you are with others. The testimony of Catholic converts confirms the wisdom of this command. The Jewish philosopher Edith Stein walked into a Catholic church. She remembers its beauty and the sight of a woman on her knees, with her grocery bags beside her, making a visit to the church. Stein felt compelled to explore a faith that could prompt such an act.

Evangelization is not strangers arguing with other strangers. It is people sharing lives of faith by fulling committing themselves to lives of faith.

Why does everyone love Ash Wednesday? Why are Protestant churches suddenly vying to deliver more ashes, darker ashes, when and where you want them? Because the need to belong and to show that we belong lies deep within the human heart. If there is one group whose expectations we all feel assured that we can meet, it is the one that says to all the world, “I’m with the sinners.”

Great Is Your Faith!
Michael Simone

Discipleship has one door: surrender to God
Terrance Klein

People who are spiritual but not religious have nothing to share with others, not even ashes. They declare from the onset that their search is singular, private. Others only get in the way. Only those who practice their religion can call others into communion, because religion binds people together: in families, in parishes, in faith. That Oklahoma dinner was not evangelization. It was ecumenism. We all grew—and grew together—by being ourselves.

And finally, the ultimate tool of evangelization. It’s been there all along, like Dorothy’s ruby slippers. Show up at Mass. Show up every single Sunday. That’s it. That is all that you need to do. If every Catholic showed up every week at Sunday Mass our numbers alone would make the entire world pause and ponder the power of this faith.

Find a parish. Pay attention to it. Show up every Sunday. It’s not a question of what you get out of Mass. It’s what you bring to Mass when you bring yourself. Evangelization is not strangers arguing with other strangers. It is people sharing lives of faith by fulling committing themselves to lives of faith. Just be Catholic, and rest assured, the world will hear your call.

I am a bit confused about what you mean by evangelizing in this article - it seems you mean that Catholics should try to bring other christians into the Catholic church. Why? They are already followers of Christ.

Maybe she [your mother] sported the slightest of smirks, something like Patton, pleased that the enemy had deployed on the very ground that she had anticipated.

Is smirking Christ-like? Was your mother just trying to one up the other woman? Are other christians (such as your Methodist grandmother) the "enemy"?

The Rev. Terrance Klein is a priest of the Diocese of Dodge City and author of Vanity Faith.