Oscar Romero could be canonized next year, archbishop says

Oscar Romero could be canonized next year, archbishop says 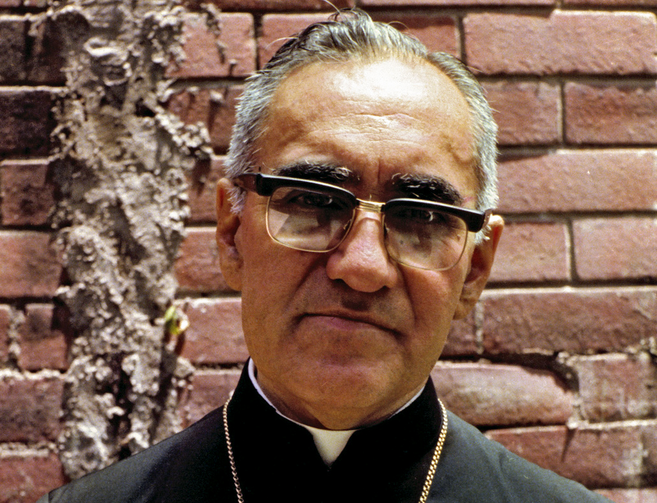 Blessed Oscar Romero of San Salvador, El Salvador, is pictured in this 1979 photo. Aug. 15 would have been the slain archbishop's 100th birthday. (CNS photo/Octavio Duran)

The archbishop officially promoting Blessed Oscar Romero's cause for sainthood said he hopes the process will conclude within a year and Catholics around the world will honor St. Oscar Romero, martyr.

"Keeping alive the memory of Romero is a noble task, and my great hope is that Pope Francis will soon canonize him a saint," Italian Archbishop Vincenzo Paglia, the postulator of the Salvadoran archbishop's cause, said in a homily Aug. 12 in London.

"Keeping alive the memory of Romero is a noble task, and my great hope is that Pope Francis will soon canonize him a saint."

In an interview with Vatican Radio's English program, Archbishop Paglia was more specific: "We could hope that in the next year perhaps it is possible" that the Congregation for Saints' Causes will have completed its review of an alleged miracle attributed to Blessed Romero's intervention and present its findings to the pope. Recognition of the miracle would clear the way for canonization.

Archbishop Paglia, in addition to promoting Blessed Romero's sainthood cause, is president of the Pontifical Academy for Life and chancellor of Pontifical John Paul II Institute for Studies on Marriage and Family.

The biggest hurdle in the sainthood cause was obtaining recognition that Blessed Romero, who was shot while celebrating Mass, was a martyr, Archbishop Paglia said in London. Some church leaders, including some who worked in the Roman Curia, had insisted Blessed Romero was assassinated because of his political position.

But, Archbishop Paglia said, "The essence of his holiness was his following the Lord by giving himself completely for his people."

Still, he told the congregation in London celebrating the 100th anniversary of Blessed Romero's birth, "Romero was not a Superman. He was afraid of dying, and he confessed that to his friends on a number of occasions. But he loved Jesus and his flock more than he loved life. This is the meaning of martyrdom."

"Love for Jesus and the poor is greater than love for oneself: This is the power of Romero's message," Archbishop Paglia said. "A simple believer, if overwhelmed by love, becomes strong, unbeatable."