St. Clare of Assisi: a saint…with or without Francis. 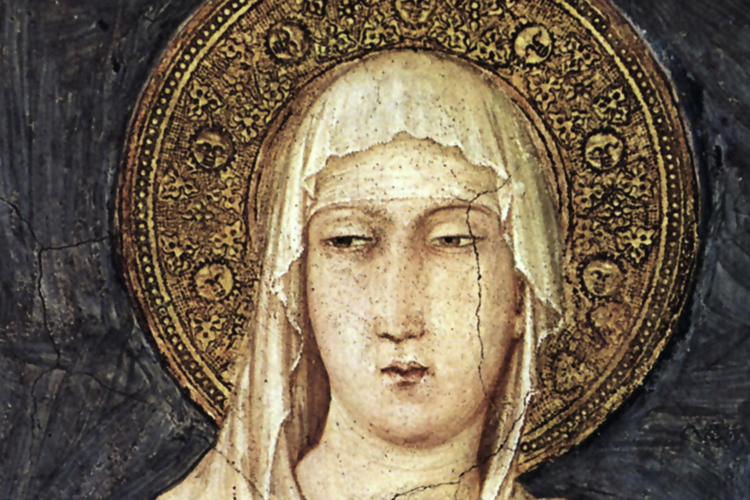 Bret Thoman, O.F.S., is an American Catholic lay writer, secular third order Franciscan, and pilgrimage guide based in Loreto, Italy. Since 2004 he and his wife Katia have directed St. Francis Pilgrimages, leading Franciscan-themed pilgrimages all over Italy, the Holy Land, Spain, Portugal and throughout the world. Mr. Thoman is the author of a popular biography titled St. Francis of Assisi: Passion, Poverty, and the Man Who Transformed the Church. His latest book is St. Clare of Assisi: Light from the Cloister. I recently interviewed him about the book and about the enigmatic St. Clare.

St. Clare herself tends to get overshadowed by her more famous companion, with popular media rarely addressing her as a subject apart from him. Looking at Clare as a historical subject in her own right, what is the distinctive message of her life for you?

Certainly the reality of being a woman religious in the High Middle Ages has something to do with this.

Yet, even Clare referred to herself as the “Little Plant of Francis” in at least three of her writings. She believed that she was a follower of Francis in the same vein as the men who joined his movement. However, the uniqueness of her vocation as a woman led to a sister order, the Order of Poor Clares, which was distinct from but also subordinate to the friars.

Things began to change after Vatican II when the council urged orders to rediscover their roots. In the early 1990s a flood of fresh Claretian research was published in English and Italian in honor of the eighth centenary of her birth.

Personally, as I learned about Clare, I discovered a woman who was original and innovative in her own right. She was profoundly mystical and charismatic, unyielding and radical in her commitment to poverty; a model of servant leadership; determined despite years of ailing health; courageous in the face of danger. In short, she was a saint…with or without Francis.

I discovered a woman who was original and innovative in her own right.

Having journeyed with pilgrims for some 15 years, I imagined speaking to them as I wrote the stories in this book. The pilgrims I’ve worked with are mostly Catholic women and men who are committed to their faith. Many have advanced degrees while some do not; some are daily Mass-goers, others are not; some identify as “conservative” while others are more “liberal.” What unites them is their desire to deepen their spirituality by learning about the saints’ lives and walking in their footsteps.

In this book I tried to get inside their minds and hearts as well as bring the 13th century alive with its sights and sounds. It is for anyone who wants to learn about Clare, but more so to accompany her on her own journey toward holiness and unity with her beloved Christ.

You mention in the book that your subtitle “Light from the Cloister” refers to St. Clare herself. Where did this title originate and what does it mean?

Scripture says: “You are the light of the world. A city set on a mountain cannot be hidden” (Mt 5:14). This was Clare. Before she was born, in 1192, her mother experienced a difficult labor. According to legend, the Holy Spirit spoke to her saying: “Do not be afraid, for you will give birth in safety to a light that will give light more clearly than light itself and shine brilliantly in the world.”

Her mother, Ortolana, promptly chose this name for her daughter: Clara (in Latin), Chiara (in modern Italian), Clare in English. Its roots mean “clear” or “light.” Though Clare lived her entire religious life within the confines of a sacred cloister, leaving it only rarely, her understanding of her vocation as a Franciscan was decisively evangelical. Despite the walls, she believed strongly that her holy life, and that of the sisters, should be an example to others on the outside. In this, she was true to her namesake and was a “light from the cloister.”

How did your experience as a pilgrimage guide influence the storytelling style of this book?

Regarding preaching and evangelization, St. Francis wrote that “words should be well chosen, pure, and brief, because it was in few words that the Lord preached while on earth.” While speaking to pilgrimage groups I learned early on what to say, but perhaps more importantly, how not to say things.

While I have written articles and papers on Francis and Clare that are more scholarly, I learned that you can reach more people by speaking colloquially; that is, simply and clearly. Therefore, the language and style of this book is not academic, it is more properly “popular.”

You are a secular third order Franciscan. What does that mean to you and how did it inform your work on this book?

In 2006, together with my wife, I made a lifelong promise to follow the Rule of the Secular Franciscan Order, formerly known as the Third Order of St. Francis. As part of the Franciscan family, writing about Clare or Francis is to write about a sister or a mother, a brother or a father.

Memorial of St. Clare, a "Little One"
John W. Martens

Francis of Assisi: A Symbol of Peace
Jay M. Hammond

Since medieval times, reading about the lives of the saints has been a devotion. I would not consider the genre of my books on Clare and Francis to be modern “hagiography”; nonetheless, I wrote with the intention of inspiring readers spiritually.

What’s one thing about St. Clare that will surprise readers?

I’ve discovered that Clare is, unfortunately, sometimes “instrumentalized” in the cultural and ecclesial struggles of today. This is not fair to her. It is widely believed that she wished to initially live her vocation “like the brothers” and preach with them side-by-side in the city squares; the enclosure, they say, was imposed on her against her will. I discovered no historical evidence to support this theory; on the contrary, my research revealed the opposite and Clare’s own words regarding the cloister are tender and endearing.

I would invite anyone who wants to get to know the true “person of Clare” to read her writings first, then the 13th-century Legend, and then to read the modern biographies. Those who do so in reverse order are sometimes surprised to discover someone quite different from the popular “spirit of Clare” they had been acquainted with.

My book is based primarily on Clare’s own writings and the legend, which are both heavily referenced throughout.

In 2004, I was seated for the first time in a Poor Clare church in central Italy waiting for Vespers to begin. I recall looking beyond the grate into the sacred enclosure as the sisters, in full habit and headdress, began quietly filling the choral space. Moments later, an organ began playing and angelic chanting began. Their joy was palpable and I immediately sensed how special these women were.

That evening my wife and I began a close relationship with those sisters. Soon they began accompanying us on our Franciscan journey and throughout the vicissitudes of life. Today that community of some 25 women are like mothers and sisters to us.

The St. Clare who informs the pages of this book is based on the historical woman who lived some eight centuries ago. Yet the Clare I know today lives in all the women who profess her Rule and walk in her footsteps. This is also the Clare who appears in my book.

It is my hope that through this book will be as a “mirror” and the reader will be able to gaze, as I did so many years ago, into the enclosure of San Damiano and discover within: St. Clare of Assisi: Light from the Cloister.

I am so impressed by your books, Franciscan commitment and work Bret! Thank you for all that you have done to teach the charism of Franciscanism to the world. (Mother Rose Catherine, F.J. - Franciscan Foundress of the Family of Jacopa Association in Steubenville, Ohio)

Dear Mother Rose, thank you for your support and ongoing prayers for all our intentions. Pax

Thank you for reading -- let's continue to pray for one another on this eve of the feast of St. Clare of Assisi. I'll be posted my homily for it on my Sean Salai, S.J. author page at Facebook.