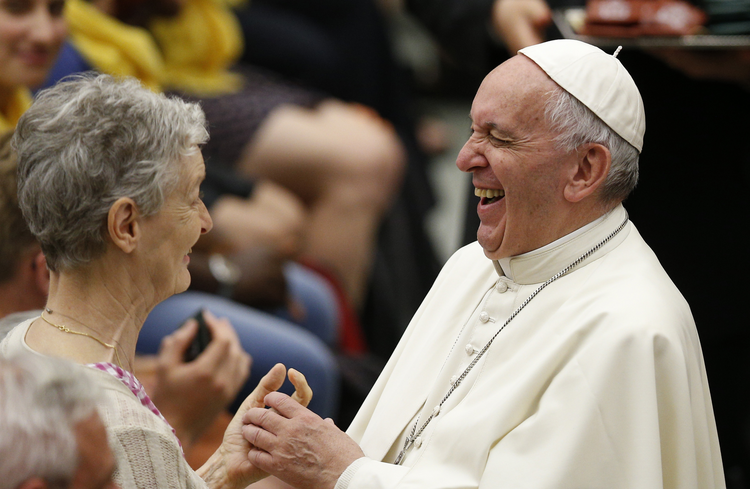 Pope Francis laughs as he greets a woman during an audience with people from Lyon, France, in Paul VI hall at the Vatican July 6. (CNS photo/Paul Haring)

Pope Francis made it clear this morning that he believes his mission as successor to St. Peter and leader of the Catholic world is far from over. The message can be read as an answer to those who hope his pontificate may end soon. He said that his mission entails being able “to dream” and to share this dream and experience of life with young people today so that they may live prophetic lives.

He spoke in a homily at Mass on June 27 as he celebrated the anniversary of his ordination as bishop in Buenos Aires 25 years ago today. He concelebrated the Mass with 41 cardinals in the Vatican’s Pauline chapel where he went and prayed at length immediately after his election as pope on March 13, 2013, before appearing on the balcony of St. Peter’s to greet the crowd in St. Peter’s Square and the world for the first time.

The pope's message can be read as an answer to those who hope his pontificate may end soon.

Taking as his text the reading of the day about God’s call to Abraham, as told in the book of Genesis, he reminded the cardinals that the patriarch was “more or less” the same age as he and them, that Abraham was “about to go on pension, to rest” when God called him.

Francis reminded them that God called Abraham as “an old man, with the weight of old age, that old age which brings pains, illnesses” and told him to “get up and go, go as if he were a young man. As if he were a scout.” God made clear to Abraham that he had “a mission” and must not stay still but keep walking and only have a tent, the pope said. He recalled that Abraham never built a house for himself, he “only built an altar. To adore the One who ordered him to get up, to walk on, with the tent.”

Francis recalled that God told Abraham to “look!” to “lift up” his eyes and “look at the horizon” and “not build walls. Always look, and go forward.” This is “the mysticism [the spirituality] of the horizon that the farther one goes on, the more distant the horizon always is,” the pope said.

Pope Francis reminded them that God called Abraham as “an old man.”

God told Abraham to “cast your gaze forward, walking, toward the horizon,” the pope emphasized, and to have hope because, in spite of his old age and sterile wife, he would have an “inheritance that could not be counted,” that would be more numerous than the stars in the sky.

The pope recalled that Abraham believed in God, got up, looked at the horizon that “has no walls,” and walked with a hope that “is without walls, it’s pure horizon.” And this justified him in God’s eyes.

Drawing on the story of Abraham, Francis reminded the cardinals at the Mass and over 150 more worldwide, as well as the five new ones that he will create on June 28, that God is calling him and them today, too, to “Get up! Look! Hope!”

Pope Francis said the Lord “tells us that this is not the hour to put a closure on our life, to not close our history, to not wrap up our history” but that “our history is still open: it is open to the end; it is open to mission.”

Pope Francis told the cardinals, “We are not gerontocratics: we are grandfathers, to whom our grandchildren look.”

The Jesuit pope noted that “someone who does not wish us well says of us that we are a gerontocracy of the church,” but he dismissed this as a cruel joke (“beffa”) and said it shows the person “does not understand what he says.”

Pope Francis told the cardinals, “We are not gerontocratics: we are grandfathers, to whom our grandchildren look”; grandfathers “that must give them a sense of [the meaning] of life with our experience,” grandfathers “not closed in the melancholy of our history but open to give this.”

He said this call of God “to get up, look, hope” is a call “to dream,” and he told them “we are grandfathers called to dream and to give our dream to the youth of today: They need it. Because they will take from our dreams the strength to prophesy and to carry this forward in their work.”

Pope Francis will turn 81 on Dec. 17. He made clear that he has received a mission from the Lord and it is far from finished.

And thank God it is not finished and that Pope Francis can articulate that for all of us. Grandfather is a wonderful image, the figure in a child's life who can provide the closest we can come to unconditional love perhaps. There is a healthy chaotic recklessness to the expression of that love in that grandfathers are not terribly concerned about what others think of how they love their grandchildren. They generally do not judge their grandchildren, rather they encourage and teach from the wealth of wisdom in their personal reservoirs. They also tend to a healthier expression of emotions, especially positive ones, perhaps sensing the importance of proclaiming their love lest their grandchildren miss the point. Their wisdom endures in the relationships they carefully nurture, just as Pope Francis calls us to nurture such a relationship with Jesus so our lives can be fuller. Get up, look, hope, and dream. What a great strategy for becoming closer to God and living a full life in service to His people!

God! It is so good to hear that Pope Francis doesn't expect to be climbing Jacob's Ladder anytime soon. The Church needs him, the world too. His critics, many departed ahead of him, will repentantly share life in the Land of the Living, no longer his critics but with frequent heavenly high fives say, "Francis, you were right!"

I doubt we'll see another Jesuit pope in the future.

Of course, I personally am not a father or grandfather but my author is a father of six, stepfather of two, grandfather of nine with another on the way--as far as he and his wife JoAnn of Arc know. He and I both celebrate the age, wisdom, and energy of Francis and hope he will be with us for at least another decade--(of years, not the Rosary).

Francis is truly a wonderful pastor and preacher. His homily is a message for people of all ages. He is inspiring.

This good man has already saved innumerable souls by his love and courage. His work will never be done, however long his life, because it is God's work in us.

Unlike the others, I am not a fan of this Pope. I'm having trouble maintaining my faith during these times. It troubles me that a man could be chosen who intentionally weakens Christ's direct teachings on marriage. I could list his other provocations, e.g. insulting those who don't agree with him, his ransacking of the Knights of Malta, etc. Time will tell whose opinion will prevail.

Kevin Murphy - I'm not quite sure about this pope either. I need to follow him and what he says more closely. Many non-Catholic Christians think he is the next Antichrist. My gut feeling is he is a little (maybe a lot perhaps) on the liberal side of the spectrum. As far as your personal faith, hang in there brother. Popes come and go but our Lord remains the same. "Remember your leaders who spoke the word of God to you. Consider the outcome of their way of life and imitate their faith. Jesus Christ is the same yesterday and today and forever. Do not be carried away by all kinds of strange teachings, for it is good for the heart to be strengthened by grace and not by ceremonial foods, which are of no value to those devoted to them..."

The Pope’s image of the leadership of the Church as wise grandfathers is quite fulsome. Hopefully he noted also that most grandfathers are “indulgent,” and I use that term in a positive sense.

Grandfathers do not condemn their progeny for errors and mistakes and foolishness. They allow their progeny the freedom to grow in experience and wisdom. They always remain present and available to their progeny. They never flag in the hope always that their progeny will be faithful to what they have taught them. They are like the father in the story of the prodigal son. There is nothing that will disrupt their everlasting affection and forgiveness.

That’s an image that has been missing, in my opinion, from much of the leadership of the Church over many years now. The image of the strict, unbending father has been the image for too many years. The image of the father (and mother) willing to expel and disavow children who violate the family’s norms remains prevalent. Calls for repentance have been transformed into pronouncements of punishment.

Now this Grandfather’s call and his example for positive indulgence to progeny is considered almost heretical. “God is love and he who abides in love abides in God and God in him.” How else do we recall progeny to God except through love?

I remember our pastor said during a homily that he cried of joy as he heard that pope Francis was elected. As time goes on, I see that pope Francis is truly a great gift that God has given the Church and mankind in this age. It reminds me of the promise of Jesus that he will never leave us orphan...The promise that he will build his Church upon a "Rock" and the gate of hell cannot destroy it…I recognize in his pope the care, mercy, humility, and tender love that many of us, especially the young, no longer perceive from the bureaucratic Church. I love this pope very much and I pray that Francis will continue to lead the Church for a long time to come.

I wonder if Pope Francis will apply his own standards to Bishops who have reached the age of 75 and happen to disagree with him.

That Francis has been a Bishop for 25 years reminds me of what was said
of General McArthur - he has been a general for so long that he can't imagine anyone disagreeing with one of his orders.