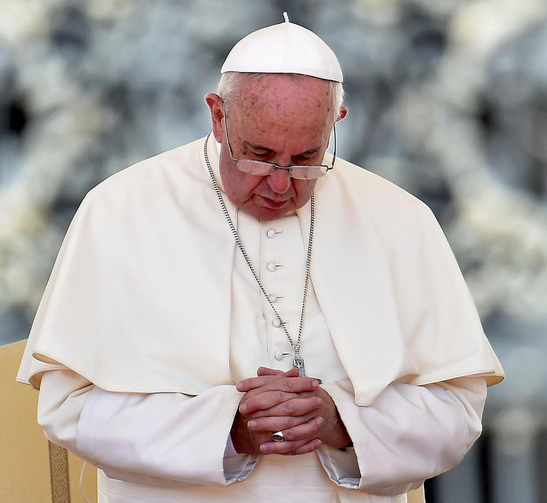 In this excerpt from Chapter 5 of his new book All the Pope’s Saints: The Jesuits Who Shaped Pope Francis, Sean Salai, S.J., a special contributor at America, tells the story of a Jesuit saint who influenced the pope’s spirituality.

In 1571, a thirty-seven-year-old Spanish cloth merchant named Alphonsus Rodriguez knocked on the door of the Society of Jesus, applying for admission to the order as a lay brother. In a series of events that left him heartbroken and despairing, the man’s wife and three children had died in quick succession and his business had collapsed. Rather than remarry or spend the rest of his life alone, he wished to dedicate his remaining years to God in religious community.

Fortunately for Alphonsus, social misfits and outcasts ranging from St. Francis of Assisi to Sir Alfred Hitchcock have always found sanctuary in the Catholic Church, and the Jesuits were willing to accommodate his unusual circumstances.

The Spanish Jesuits knew that Alphonsus, who took up the family trade at age 12 when his father died suddenly, had been forced to quit his studies in a Jesuit school to help support his mother and 10 siblings. He had met the Society as a child when St. Peter Faber, one of the first companions of St. Ignatius, stayed in the Rodriguez family home during a preaching tour and prepared young Alphonsus for his first communion.

That connection is undoubtedly why Alphonsus turned to the Society, desperate and full of anxiety, after his family died and his business failed. With nowhere else to go, he managed to find a home in the Society of Jesus for the rest of his life. While St. Ignatius founded the Jesuits as a clerical religious order with priesthood as the norm, he also called for “temporal coadjutors”—vowed lay brothers who spend their lives praying and working in non-priestly roles—to incorporate men like Alphonsus into the order.

To be fair, Alphonsus originally asked to be admitted as a candidate for the priesthood when he was 35 years old and had just lost his family. But the local Jesuits told him he was too old and did not have enough education, having dropped out of school so young, to enter the order as a seminarian.

They also said his health was too delicate to endure the hardships of missionary priesthood. So Alphonsus spent roughly two years in spiritual direction with a Jesuit priest before finally applying to the Society as a brother.

Brother Alphonsus entered the Jesuit novitiate on Jan. 31, 1571. Six months later, and well before his perpetual profession of the three vows on April 5, 1573, his Spanish superiors sent him to the town of Palma on the island of Majorca, where he did odd jobs in the Jesuit college for six years. In 1579 he became the porter of the school, spending the rest of his life answering the door and chatting with people who passed through. Palma proved to be his first, last and only assignment in the Society of Jesus: Brother Alphonsus died there in 1617 at age 84.

Given these bare facts, we might wonder what made Brother Alphonsus Rodriguez so holy that the Catholic Church later canonized him as a saint. Aren’t Jesuits, as missionaries vowed to obedience, supposed to move around rather than stay in one place for 46 years? Why do we members of the Society of Jesus, Pope Francis included, celebrate this quiet widower as the patron saint of Jesuit brothers each year on Oct. 31, the day of his feast, in our houses when most Americans are celebrating Halloween?

On the surface of it, Br. Alphonsus spent most of his life as a grief-stricken widower who performed the lowliest job in the College of Montesion. Today he would be something akin to a high school janitor, overlooked by many. But amidst his simple routine of opening and closing doors, St. Alphonsus Rodriguez developed a deep relationship with God and a gift for spiritual conversation that deeply affected everyone who paused to talk with him. He achieved a serene poverty of spirit incomprehensible to those who have never reconciled their sufferings in God’s love.

Sean, I read your edifying contribution on St. Alphonsus Rodriquez and feel personally renewed. But forgive my density in not understanding how Alphonsus helped form Francis' spirituality. Exactly how did Alphonsus do that? I love reading your writings and can safely predict that one day you'll be an excellent Priest and Spiritual Director to souls!

Thanks for writing -- a great question! Not to avoid it, but I'm afraid the only way to get the answer is to buy my book and read the rest of Ch. 5, as this excerpt is only a tease. There's a lot more context and material in the book, especially right before and after the part reprinted here, that answers your question with the thoroughness it deserves. :)

Sean, thanks for responding and letting me know my question was not really dense. To prove even further that I'm not dense, I will get your book, "All The Pope's Saints: The Jesuits Who Shaped Pope Francis," and expect a fabulous read and also find out how Alphonsus helped shape Francis.

Decided to post this note I sent to Father Sean Salai, after reading his book, "All The Pope's Saints," encouraging many others to buy and read that book. One of the best I ever read!

Dear Faher Salai,
Just about done reading "All The Pope's Saints" and can't wait to tell you it's a fabulous book, wrapped in truth, the whole truth and nothing but the truth! I felt the pull of the Holy Spirit on every page read and marveled at His gentle, but determined grasp displayed in the lives of the Jesuit Saints who so marvelously shaped Pope Francis. Yes, I get it! The touch of St. Alphonsus Rodriquez is evident in the way Holy Father Francis teaches all to see God/Jesus in everyone, especially the poor. answering my online querry to you, as to how did Alphonsus do it.

Thanks for uplifting the Church whom we are, by what you write and especially through HOW you write! Keep telling us about the Saints, the people with whom I hope to rub shoulders in the Land of the Living, doing a little of that even now, made easier by you.