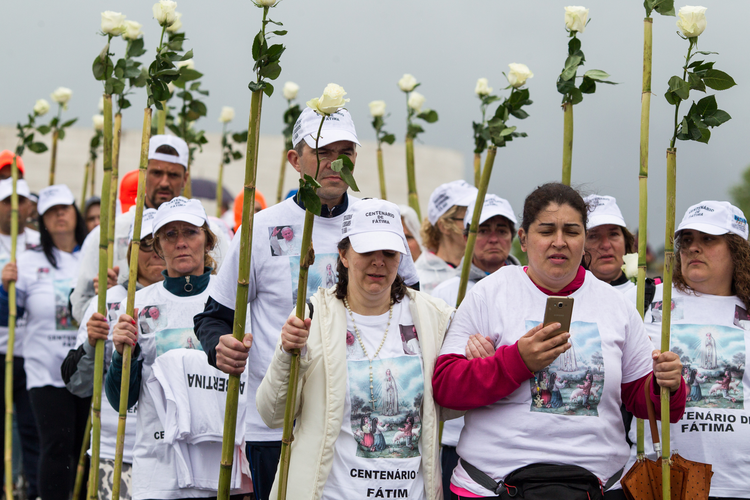 Pilgrims arrive at the Marian shrine of Fatima May 10 in central Portugal (CNS photo/Paulo Cunha, EPA).

One million pilgrims are expected to join Pope Francis in Fatima on May 12 to 13 for the centenary celebration of the apparitions of Our Lady to three Portuguese shepherd children, and to declare the two youngest of them, Francisco and Jacinta Marto, the first child saints in the history of the church who are not martyrs.

In a video message on the eve of his 23-hour visit, Francis told Portugal’s 10.3 million inhabitants, 88.7 percent of whom are Catholic, that he comes “with Mary, a pilgrim in hope and in peace,” to “share” with them and people across the globe “the Gospel of hope and peace.”

To further emphasize the spiritual nature of his pilgrimage, he decided not to visit anywhere else in this country, which is sandwiched between the Atlantic and Spain, but to fly directly from Rome to Fatima. The town has 11,500 inhabitants and is 75 miles north of the capital city, Lisbon, where some 4 million pilgrims come every year to pray.

Francis has a special devotion to Our Lady of Fatima because it was on May 13, 1992—the 75th anniversary of the first apparition—that the apostolic nuncio in Argentina, Archbishop Ubaldo Calabresi, informed him that Pope John Paul II had nominated him auxiliary bishop of Buenos Aires. Then, at his first Angelus as pope in St. Peter’s Square on March 17, 2013, speaking about mercy, Francis recalled how the statute of Our Lady of Fatima was brought to Buenos Aires in 1992—the year he was made bishop. Soon after becoming pope, he asked the cardinal archbishop of Lisbon, Jose da Cruz Policarpo, to consecrate his entire pontificate to Our Lady of Fatima, and he asked that the famous statue—which has visited 64 countries over the past half century—be brought to St. Peter’s Square on Oct. 13, 2013, where he venerated it. (The last apparition of Our Lady to the children took place on Oct. 13).The Fatima event has entered profoundly into the hearts and spirituality of Catholics especially in Europe, but also worldwide. Countless homes have a statue of Our Lady of Fatima, and children from an early age have been told the story, which both mystifies and inspires.

It is an event that relates to war and man’s inhumanity to man, but also to the Marian call for prayer, sacrifice and conversion as the pathway to peace. What happened at Fatima is entwined with the history of Europe in the 20th century when the continent became the theater of two world wars and the birthplace of atheistic communism, revolutionary violence and class war, starting with the Russian revolution in October 1917 (after the last apparition at Fatima), and accompanied by persecution of the church and believers, first in eastern and central Europe, and soon after in parts of Asia and Africa.

Francis has a special devotion to Our Lady of Fatima because it was on May 13, 1992—the 75th anniversary of the first apparition—that he found out he would be named bishop.

This understanding reflects what was said on May 13, 2000, after Saint John Paul II beatified Francisco and Jacinta Marto at the Fatima shrine, in the presence of their cousin, Sister Lucia dos Santos. There, as the Mass ended, the Cardinal-Secretary of State, Angelo Sodano, called a press conference and announced that the pope—who attributed his survival from the assassination attempt on May 13, 1981 to Our Lady—had instructed the Congregation for the Doctrine of the Faith to make public “the third secret of Fatima,” in the coming weeks.

Cardinal Sodano revealed that the secret text—which Pius XII, John XXIII, Paul VI and John Paul II (after the attempt on his life) had read—“contains a prophetic vision, similar to those found in Sacred Scriptures which do not describe with photographic clarity the details of future events, but rather synthesize and condense against a unified background events spread out over time in a succession and a duration which are not specified.” Consequently, he said, “the text must be read in a symbolic key.”

The cardinal told us that “the vision of Fatima concerns all the war waged by atheist systems against the church and Christians, and it describes the immense suffering endured by the witnesses to the faith in the last century of the second millennium. It is an interminable Way of the Cross led by the Popes of the 20th century.” Moreover, he said, according to the interpretation of “the little shepherds, which was recently confirmed by Sister Lucia, the ‘bishop clothed in white’ who prays for the faithful is the Pope. As he makes his way with great effort towards the Cross amid the corpses of those who were martyred (bishops, priests, men and women religious, and many lay persons) he too falls to the ground, apparently dead, under a burst of gunfire.”

He said John Paul II not only thanked Our Lady of Fatima for protecting him from death but also for the events that followed 1989 (when the Berlin Wall fell) and “led in the Soviet Union and a number of countries in Eastern Europe, to the fall of the Communist regime which promoted atheism.”

He concluded that “even if the events to which the third part of the Secret of Fatima refers now seem part of the past, Our Lady’s call to conversion and penance, issued at the beginning of the twentieth century, remains timely and urgent today.”

Pope Francis clearly shares that conclusion. He believes a “third world war” is now being waged “piecemeal,” and has urgently appealed to believers to pray for the conversion of the hearts of those responsible for this deeply troubling reality that is causing so much death and suffering to peoples in many countries, from Syria to Yemen, from the Democratic Republic of the Congo to Afghanistan, and producing a humanitarian crisis of refugees such as has not been seen since World War II. He emphasized the need for conversion and prayer in the video message.

The story of Fatima: the apparitions, the miracles and the journey to sainthood
Gerard O’Connell

Francis also declared that he is coming before Our Lady at Fatima “as the universal pastor of the church” to offer her “a bouquet of the most beautiful ‘flowers’ that Jesus has entrusted to my care,” that is “all of our brothers and sisters throughout the world who have been redeemed by Christ’s blood, none excluded.”

He asks the Portuguese and believers worldwide to accompany him with their prayers as he arranges this “golden rose” at her feet, and entrusts to her the inhabitants of planet earth, “none excluded,” and asks her to be their “refuge and the path that leads to God.”

On this, his 19th foreign trip, Francis will arrive at an air-force base near Fatima on May 12, where he will be welcomed by the country’s president, Marcelo Duarte de Sousa. From there he will travel by helicopter to Fatima and then drive on a popemobile to the Chapel of the Apparitions where Our Lady first appeared to the three children, and where the famous statue of Our Lady of Fatima stands today. There he will recite a prayer he composed “for peace” and “harmony among all peoples in this world.” In it, he asks Our Lady to enable him and all believers to follow the example of Francisco and Jacinta to “tear down all walls and overcome all boundaries” and “going to all peripheries, there revealing God's justice and peace.”

Francis will canonize the two children at the beginning of the Mass at the shrine on Saturday, May 13, the 100th anniversary of the first apparition.

Looking forward to the coverage. My wife and I and a friend will be going for the October celebration and are interested in what may be happening then. Hopefully there will be good videos posted of everything.

I, too, will be avidly watching as much as I can of this profoundly important ceremony on the Vatican TV. They usually have excellent live coverage of Francis' trips. I am so grateful to be able to participate at such a close range, even though I am half a world away.