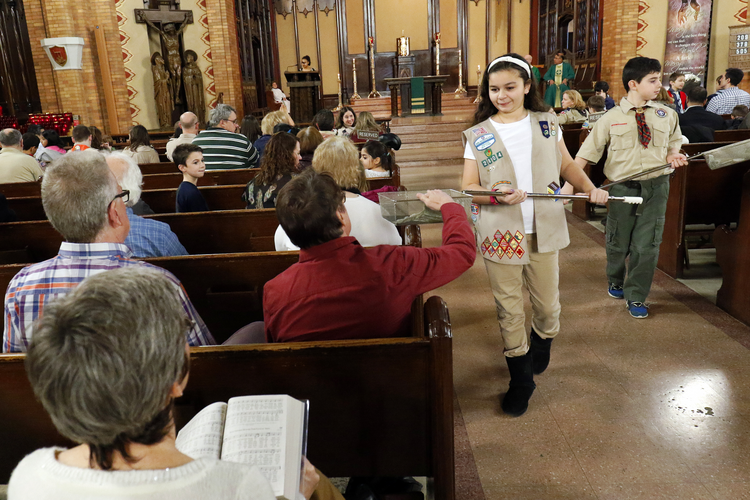 Girl Scout Julia Ocasio, 13, and Boy Scout Thomas Perotta, 10, use collection baskets during a Scout Sunday Mass on Feb. 7 at Immaculate Heart of Mary Church in the Windsor Terrace neighborhood of the New York borough of Brooklyn. (CNS photo/Gregory A. Shemitz)

The archdiocese covering the Kansas City, Kansas, region and much of the eastern part of the state said Monday it is severing ties with Girl Scouts and urging an end to cookie sales, citing philosophical concerns with the organization.

The Archdiocese of Kansas City in Kansas announced in a statement that Girl Scouts is "no longer a compatible partner in helping us form young women with the virtues and values of the Gospel," The Kansas City Star reported.

The archdiocese said it is switching its support to a 22-year-old, Christian-based scouting program, American Heritage Girls.

American Heritage Girls, with 1,005 troops and more than 47,000 members, has become an option for those who claim Girl Scouts has turned too liberal and has relationships with organizations that don't share traditional family values. The Girl Scouts deny that.

The archdiocese said it is switching its support to a 22-year-old, Christian-based scouting program, American Heritage Girls.

"I have asked the pastors of the archdiocese to begin the process of transitioning away from the hosting of parish Girl Scout troops and toward the chartering of American Heritage Girls troops," Archbishop Joseph F. Naumann said in the statement.

Naumann said pastors have the option of making that shift "quickly, or to, over the next several years, 'graduate' the scouts currently in the program," and to form American Heritage Girl troops this fall.

Naumann, in a January letter to the archdiocese's priests, also called for an end to Girl Scout cookie sales in the archdiocese, effective after the current school year ends.

The action has angered some Girl Scout leaders and parents in the archdiocese who consider Girl Scouts a respected program and view Naumann's move as punitive and unfair, treating girls in their troops like second-class citizens.

"This is frustrating; parents are very irritated," Maria Walters, a former Girl Scout leader in the archdiocese and mother of two Girl Scouts, told The Star. "I feel we should all be together as one in the community. This does nothing but divide us.

"I don't know why you would take an organization out of a school when it provides an option for girls to feel like they're part of a group."

Carlson's letter then to priests, scout leaders and other Catholics said the archdiocese and the United States Conference of Catholic Bishops have been investigating concerns about the Girl Scouts of the USA and the parent organization, the World Association of Girl Guides and Girl Scouts, for several years.

Carlson said he worried that contraception and abortion rights were being promoted to Girl Scouts. His letter also said resources and social media "highlight and promote role models in conflict with Catholic values, such as Gloria Steinem and Betty Friedan."

Will The Girl Scouts' Cookies Crumble?
John A. Coleman

Steinem, 81, is a feminist, journalist and political activist. Friedan, who died in 2006 at age 85, was a feminist and writer.

The closed-minded cultural warriors are at it again. Sad.

It's provincial, authoritarian views like thist that cause Catholics to abandon their churches..

Without any sort of dialogue with a well respected organization? Without consultation among other U.S. bishops? Next they might even outlaw Fox News for its prurient behavior. Naw - can't get in the way of what sells hate and misogyny. Dangerous 10 year olds selling cookies, not condoms.

This kind of poor leadership and decision-making seems so much in line with the larger culture right now. It's almost a throwback to the "barefoot and pregnant" era that progressive folks have worked so hard to move our culture away from...

I can think of nothing good to say of this action. Most priests I speak with have no trouble affirming artificial birth control. Bishops are a work of art.

Amazing that so many resources were consumed to arrive at a very flawed decision. Why now, especially when there are so many more worthy causes to spend our precious church resources on? Truly a failure of church leadership once again.

As a native of St. Louis with family in the Kansas City and eastern Kansas areas, I find it more than coincidental that the only two US bishops taking public actions against the Girl Scouts are from Missouri and Kansas. This is a region of the US where the Christian "mega-church" is a well-established social influence. And the American Heritage Girls were created on the foundation of that influence. https://www.americanheritagegirls.org/about/history/

Dominic Deus here. Oh God, help us. Please, please, please. Send me an angel or the Holy Spirit to give me a sign this is just a joke or a fever dream. I can't bring myself to respond with anything approaching intellectual thought. I just want Girl Scout Cookies-- all I can get. Preferably Thin Mints but anything would be like the Grace of God compared this episcopal curmudgeon.

Other than the Eucharist itself, no wafer of any description can match the sublime experience of that first Girl Scout Cookie in the spring. I happen to know that experience is shared by people of all faiths, skin color, gender, transgender, and even Boy Scouts. It's even a pleasure the celibate can enjoy. I know this because during my prolonged celibacy after the passing of my first wife (which sucked even more than I thought it would) Girl Scout Cookies were a sign from God that life is always filled with hope. "There will always be Paris--and Girl Scouts, and momma, and me."*

* It's a French cradle song. If the archbishop doesn't know that he needs to go Paris. I can tell him about some really great places.

This is so wrong. Catholic children need to learn to interact in secular organizations as well as in faith-based organizations. This seems to be an ill-considered and unjustified move.

Bishops are still appointed by the Holy See and are, I believe, penultimately responsible to the Bishop of Rome. Might we dare to hope that irresponsibly judgmental attitudes and actions such as those of the Archbishops of St. Louis and Kansas City might come to the attention of Francis and get them some sort of reprimand leading to a reversal of their shameful actions? Meanwhile misogyny is a sin, is it not, whether of Donald Trump's variety or of that of some Catholic hierarchs? You go, Girl Scouts!!

As a former Scout ChaplaIn, I can attest I have not seen any of these problems in our diocese. We have a diocesan committee on Catholic Scouting, affiliated with the National Catholic Committee on Scouting and serving under the diocese youth ministry office. Catholic Girl Scout troops generally operate out of parishes under the diocese and all leaders are trained in accord with Protecting God's Children Standards. Both Girl and Boy Scouts work toward earning religious emblems in addition to scout badges. I believe a diocese gets out of scouting what it puts into it. It takes a great deal of dedication and plain old hard work to make scouting work. A year ago there were memes on social media claiming Girl Scout cookie money went to support Planned Parenthood. The Snopes fact check totally discredited that fake news. There are people who like to make trouble. Their goal I sometimes believe is to make others as miserable as they are. Catholic Scouting helps build a solid foundation for developing responsible, respectful, and reverent young people and citizens.

Yes, except I was always told it was French! But I'm not French, so maybe it's Russian. Or, maybe it's one of those things to get attributed to a lot of languages just like Winston Churchhill gets credit for seeing a lot of things he never said. Well thank you for your post. This could be a fun mystery to sort out. I'll think about it while
I eat Girl Scout cookies.

The bishops’ actions bespeak a point of view that is both indefensible and immature in the very diverse and knowledgeable world in which we live. Withdraw, remove ourselves, pretend it doesn’t exist, that’s their mantra. And it works up to a point. And then a girl scout grows up and reads and talks and shares and finds out about all the things from which she was shielded by her parish priest and her bishop. She decides whether or not keeping her in ignorance was the right thing to do. What does she do then? Withdraw, remove herself, pretend the church doesn’t exist?

If there is some sort of national conference of Catholic Girl Scouts, as one of the comments here seems to indicate, then aren’t there mechanisms by which to address the issues within the context of the Girl Scout movement? Here we are as a church trying to find common ground with the Orthodox, Evangelicals, other Protestants, Muslims, etc. and two bishops want to get rid of the Girls Scouts from their dioceses. Other than making us look like fools and probably helping to empty the pews even more, I just don’t get it.

TO: Catholic Women in the Kansas City, KS archdiocese

Just say "No" (as in "No way!") to Archbishop Naumann. How dare this guy tell women what to do!!!

I don't even know where to start with how stunted this is.

I looked at the American Girl Heritage website. Girls are given religious medals and awards for achievements. They are called "Patriots" when they reach a certain level. They learn some life skills: sewing, teamwork. It is over-layed with "a life for God" language.

It sounds harmless. And granted, some of it is very good. I especially liked hearing that the girls learned to sew and cook and to do things together .
What concerns me is the near constant religious interpretative language. At what point does the girl see the world for herself, in all of its raw beauty and chaos, and find her own response? This is where true spiritual growth and maturity happens.

Yes, it is good to give young people religious values and morals to draw from, but unless you give them the freedom to test those values in reality, they will never grow up and know who they are. They will always be bound to this small, little box with all the answers. They will not take the risk to enter into a larger place of uncertainty, confusion, doubt.

Our girls deserve mature spirituality to guide them. The Girl Scouts, a secular organization with a broad range of views, would be a place where girls coming from Catholic homes might see how their spiritual values resonate in the world as it is.