The pope has landed in Egypt. Here's what he plans to do.

The pope has landed in Egypt. Here's what he plans to do. 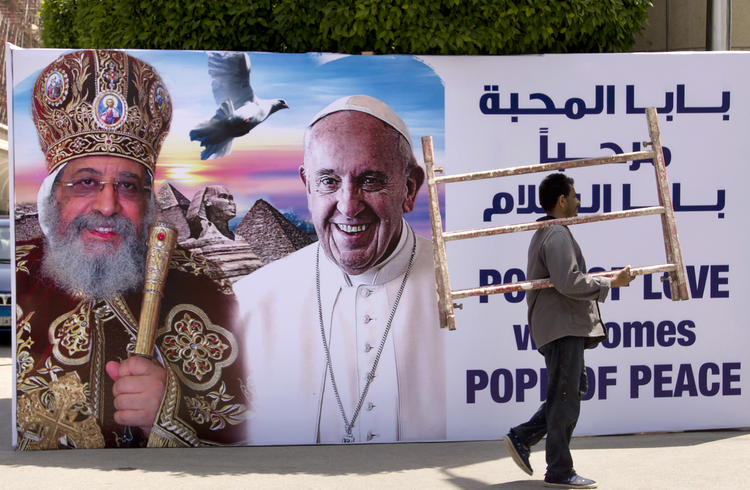 Pope Francis came to Egypt on Friday for a historic two-day visit aimed at presenting a united Christian-Muslim front to repudiate violence committed in God's name.

The Catholic pontiff is holding a series of deeply symbolic meetings in Cairo with Egypt's religious and political leaders; he is also to participate in an international peace conference organized by Al-Azhar, the world's primary seat of Sunni Islamic learning.

Francis will also show solidarity and bring a message of peace to a country that has for years endured an increasingly emboldened insurgency led by a local affiliate of the extremist Islamic State group.

The pontiff's Friday-Saturday visit will also lift the spirits of Egypt's large Christian community after three suicide bombings since December — including deadly twin Palm Sunday church attacks—killed at least 75 people. IS claimed responsibility for the attacks.

After taking off from Rome's Leonardo da Vinci airport, Francis stepped out of the Alitalia jet to a red carpet welcome in the early afternoon hours in Cairo. Two children, a girl in a white dress and a boy in a black tuxedo, presented Francis with bouquets of flowers.

From the airport, Francis was taken to the presidential palace, the opulent Ittihadya, where he met with Egyptian President Abdel-Fattah el-Sissi. Both leaders stood to attention as a military band played the national anthems of the Vatican and Egypt.

After talks with el-Sissi, Francis is to head to Al-Azhar, the revered 1,000-year-old seat of Sunni Islam teachings. There, he will meet privately with grand imam Sheikh Ahmed el-Tayeb, and participate in an international peace conference later in the afternoon.

The goal of the trip is to bring a message of peace to a country that has been ravaged by Islamic extremist attacks, and encourage a culture of respect and tolerance for religious minorities, said Cardinal Pietro Parolin, the Vatican secretary of state.

"The fundamental issue is education, and educating those of different religious beliefs and especially the young, to have great respect for those of other faiths," Parolin told the Vatican newspaper L'Osservatore Romano. "The question of language is fundamental: when you use a violent language, there is the danger that it can result in violent acts."

Francis and Tawadros will preside over an ecumenical prayer service in St. Peter's church, the Coptic cathedral that was the site of a December suicide bombing claimed by Islamic State militants that killed 30 people.

Together they will pray for the victims of the attacks.

Francis has frequently spoken out about today's Christian martyrs and the "ecumenism of blood" that has united Catholic, Orthodox and other Christians targeted for their faith by Islamic militants.

Parolin, the Vatican No. 2, said he hoped Francis' visit might help convince them to "stay in their countries despite the difficulties and continue to give their Christian testimony in a majority Muslim society."

While Francis eschewed the armored popemobile his predecessors used on foreign trips, security was visibly tightened for the 27 hours he will be on the ground in Cairo.

Streets that will be used by the pontiff's motorcade around the Coptic Orthodox cathedral and the Vatican Embassy were cleared of cars, and police swarmed the upscale Cairo neighborhood of Zamalek on a Nile River island where Francis will sleep on Friday.

Policemen in riverboats patrolled the Nile in front of the embassy. Security men were posted every hundred meters (yards) or so along the 20-kilometer (12-mile) stretch between the airport and central Cairo in anticipation of Francis' arrival. Armored cars were stationed in front of the presidential palace, where Francis makes his first stop.

The pope's visit, however, is unlikely to cause much disruption to the city of some 18 million people as it falls on the Muslim Friday-Saturday weekend, when the usually congested traffic is significantly lighter.

Banners in the Zamalek neighborhood welcomed Francis, with one from a private company saying "1,000,000 workers of Sharm el-Sheikh welcome the pontiff."