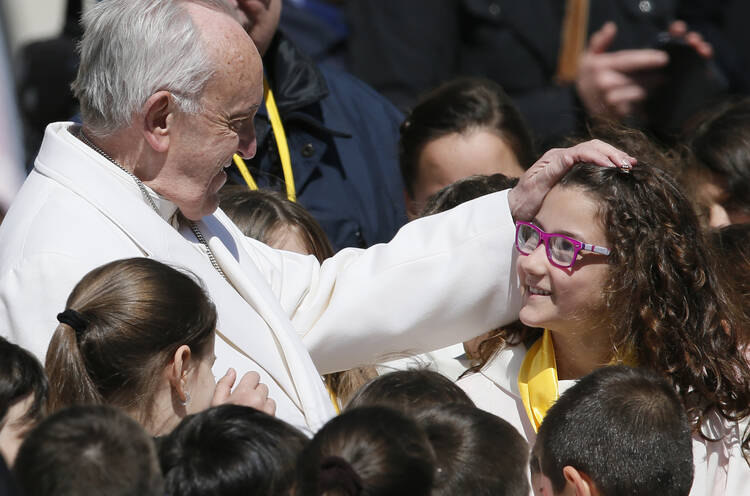 James Keenan, S.J., is a moral theologian who serves as Canisius Professor and Director of The Jesuit Institute at Boston College. As a specialist in virtue ethics and the history of theological ethics, he is the author of several moral theology texts, including the recently-updated third editions of his books Moral Wisdom (September 2016) and Works of Mercy (May 2017), both from Rowman & Littlefield.

On April 12, I interviewed Father Keenan by telephone about the moral theology of Pope Francis. The following transcript has been edited for length.

How would you describe the moral theology of Pope Francis?

The first word that comes to my mind: engaged. It’s a very pastorally engaged moral theology. He wants to try to have people consider the challenges before them. He’s asking average Catholics: Are they mindful of persons in need; are they mindful of the common good; are they mindful of why Christ’s mercy to them needs to be realized in others? He wants to engage the full church in responding concretely to the need for mercy, particularly in the lives of those who live in unstable, threatened, alienated or abandoned situations—most clearly the refugees and immigrants. But he’s also mindful that there’s always a need for mercy in our local communities for the poor who live among us.

This notion of mercy extends to what he wants his religious, priests and hierarchy to do. He’s powerfully engaged with those in ministry, asking them directly how well they are practicing mercy. And how well are they living a life that visibly embodies what the Good Samaritan did?

As a fellow Jesuit, what do you find that’s distinctively Ignatian about Pope Francis’s approach to ethical issues?

I think he has a deep connection between prayer and morality. He believes the only way you can get to mercy is through prayer. Ignatian prayer, inasmuch as it’s contemplative, meditative and Eucharistic, offers a variety of ways for us to reflect on what we have received and what we need to do.

Francis reminds us of what we’ve received and what we need to do. We’ve received mercy, we need to express mercy; we’ve received grace, we need to extend grace. And I think that that fits very much with the Ignatian Examen itself, that rhythm of gratitude that extends into mission. Clearly he thinks the contemporary world is bothered by many things, but not by what we really need to be bothered by, and that is our neighbor.

Keenan: Francis reminds us of what we’ve received and what we need to do.

Vatican watchers have observed that Pope Francis tends to bring a “third world perspective” to these ethical issues, emphasizing global inequality and the economic impact of climate change on the developing world. Why do you think this focus is so difficult for us in the United States to embrace?

Ethicists are constantly saying that the question of the future of the earth is also a question about how the changes will affect those who are most marginal. In ethics, we all realize them to be connected.

However, I’m convinced that in the United States, we do not take sustainability issues all that seriously, because we simply believe we can figure out ways of surviving when ocean levels get higher and centennial storms occur more frequently. I think the United States has this confidence that we’ll be able to handle whatever happens; so if another Katrina happens, or another storm hits New York or some other place, we can keep bouncing back. This is part of that American “can-do” mentality, but it would be helpful if somehow we could address that and say: “Isn’t this catastrophic suffering avoidable? Can we not look at how our consumption affects the entire global community?” I think the pope is actually asking if we can bring any asceticism from our prayer to our daily lives. Not primarily a private asceticism, mind you, but a public asceticism that’s deeply connected to the common good.

You recently finished revising the third editions of your books Moral Wisdom and Works of Mercy, updating them with recent material from Francis. What were the main things you took from Francis for these new editions?

I argue in Moral Wisdom that it’s especially in love and suffering that we see how much mercy emerges. Love is expressed through mercy and suffering requires mercy. So in both of those areas, I highlighted what Pope Francis had done in the Year of Mercy.

Keenan: I think the pope is actually asking if we can bring any asceticism from our prayer to our daily lives.

You’ve written a great deal on “Amoris Laetitia,” the pope’s post-synodal apostolic exhortation on the family from April 2016. How would you characterize the reception of this document among Catholics one year later?

One of the things I’ve tried to do is look beyond the United States, because the way our bishops’ conference has received it is not terribly significant. If you look at what the German, Austrian, Italian and French bishops and cardinals have done, to say nothing of the Argentinians and South Africans, you see time and again how robustly these churches have received “Amoris Laetitia.” You see a lot of innovation and acknowledgement that the pope’s summons is challenging but necessary. In the U.S., we can see Cardinal Cupich speaking and writing on “Amoris Laetitia,” and Cardinals Farrell and Tobin as well, and Bishop McElroy has addressed it through his important local synod, but we need to see something more from our other bishops.

When you start looking at what Cardinal Vingt-Trois has to say about it in Paris, what Cardinals Marx and Schönborn and the German bishops conference have done, what the Argentine bishops have done, you are naturally hopeful to see a reception here in the same way.

Cardinal Gerhard Müller (the prefect of the Vatican’s Congregation for the Doctrine of the Faith)told an Italian magazine in February that admitting divorced and civilly remarried Catholics to Holy Communion is not possible. What are some ways we might welcome them to the other sacraments as the pope suggests in his exhortation?

Italian commentators like Rocco Buttiglione and Austrian leaders like Cardinal Schönborn have noted that prior to Pope John Paul II in “Familiaris Consortio,” there was no way at all of re-admitting divorced and remarried Catholics to communion. There the pope gave the case (No. 84) that if a couple in their remarried state remained continent, there was a possibility of receiving communion. So a little history helps us remember it’s not a question that Francis first broached, but a question and a change that Pope John Paul II initiated.

To the point of pastoral practice, in one French diocese the bishop has appointed seven priests as ministers of mercy to respond to the needs of divorced and remarried Catholics. In other words, he decided who in his diocese he felt most competent to address the sacramental and ecclesial needs of divorced and remarried persons. Cardinal Schönborn himself has said that the practices suggested in “Amoris Laetitia” have been done in Austria for years. It would be very interesting to find out what exactly is the practice in Vienna.

If you could say one thing to Pope Francis about moral theology, what would it be?

Last month I had the opportunity to meet with Pope Francis for 50 minutes with six of my colleagues, all ethicists from a network we established called Catholic Theological Ethics in the World Church, and we presented him with several books by us. He was delighted with the work we’re doing. We explained that, as ethicists, we all have our own judgments, and that we maintain a dialogue and a unity based not on uniformity but on mutual respect and being faithful to the tradition.

During the meeting, Pope Francis emphasized more than once the importance of our method, saying that we need a hermeneutics in which we find unity in our diversity. As we noted, it is not something that compromises our tradition, but the way the tradition is seen in Bangalore is different from the way it’s seen in Krakow and Bogota. How do we have dialogue in the church that’s able to pay attention to a local culture, not to relativize the impact of the truth but to see how it’s to be rightly realized in a particular culture in a particular way?

I think that’s something he’s trying to do and he resonates with it: A moral theology that’s able to be fleshed out in different places. For instance, people address issues like family life, climate change and the arms race with different concerns. How do we do ethics in a truly global church? That’s the question my colleagues are working on and one I think Pope Francis is vigilant about.

What do you see as the most pressing ethical issue today?

I think the ethical issues are almost changing by the hour. The two most enduring issues are climate change and migration, and all that they entail. We have 60 million people who are migrating out of deep need. We haven’t ever had movements like this; and we don’t see it letting up. So immigration is the most significant issue, but it’s prompted by climate change issues.

Let me close saying that when we met Pope Francis, four of the seven of us were women. Tangibly, women’s voices were present. In the church, the most pressing issue is having those voices heard.

Thank you for sharing. Let's continue to pray for one another and for our planet.

Another interview with a Jesuit about the greatness of Pope Francis. Mercy, climate change, immigration, etc. It almost writes itself. Never anything about Francis' disdain for more traditional Catholics or his shoot-from-the hip theology. I particularly liked where Father Keenan cites the great insights of Cupich, Tobin, Farrell, McElroy and others who would agree if Francis said up is down, the Sun evolves around the earth, ot that the Mets' starting pitching will remain healthy till end of season. We are not dumb. These are Francis' devotees, and will never deviate from the program. Preventing these safe, "rah-rah" pieces, one on top of another, sure makes for unexciting reading.