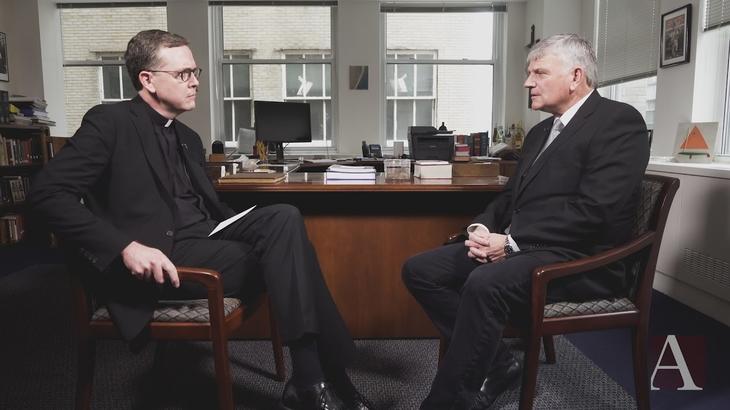 The name Billy Graham first appeared in these pages in the issue of May 4, 1957, under the byline of Gustave Weigel, S.J. The essay was simply titled, “What to Think of Billy Graham.” Hard as it is to imagine today, just what Catholics should think about the dashing, charismatic preacher from North Carolina was, at the time, a pressing question. “Billy Graham,” Father Weigel wrote, “is something more than the name of a man. It is the label of a phenomenon.” By 1957 Billy Graham was already a global force; a preacher with such boundless energy and rhetorical power that, in the words of one biographer, he ranks alongside the Rev. Martin Luther King Jr. and Pope John Paul II as “the most creatively influential Christians of the twentieth century.”

Father Weigel’s assessment was broadly positive, but more measured. That’s understandable. As that same Graham biographer, Grant Wacker, has observed, in the 1950s “evangelicals and Catholics eyed each other with deep suspicion. Most evangelicals felt that Catholicism was sub-Christian at best, and many believed that it was not Christian at all.” Yet Weigel knew that Graham did not belong to the more odious anti-Catholic element. In fact, Graham made it a point to write a letter to John F. Kennedy in which he said that, should Kennedy choose to run for president, Graham would not raise “the religious question.” That was progressive and open-minded for its day.

It was in that spirit of friendship that I welcomed William Franklin Graham III to our headquarters in New York on March 28. He is the fourth child of Billy and Ruth Graham and the current president and chief executive officer of the Billy Graham Evangelistic Association and of Samaritan's Purse, an international Christian relief organization. This Reverend Graham contacted my office because he was promoting a new documentary on the work of Samaritan’s Purse in Liberia during the 2014 Ebola outbreak. His team wanted an interview.

I was hesitant. In my judgment, as well as that of many others, Franklin Graham has said things that are manifestly anti-Muslim, anti-L.G.B.T., uncharitable and just plain incorrect. On the other hand, I have a Christian obligation to welcome anyone who wants to enter my house as a guest. And I admired the fact that he would want to do so knowing full well that he was not likely to find a wholly sympathetic audience here.

He was polite, friendly, honest and forthright. We certainly saw eye to eye about the reason for his visit: the work of his team in Liberia is a moving testament to Christian virtue in action. “Facing Darkness,” which will be shown in select theaters on April 10, is a riveting portrait of a people in crisis and the Christians who came to their aid. Two of Graham’s team contracted Ebola. Both survived, but only after a harrowing rescue. He made the film, he told me, because he wants “to inspire a younger generation.” “I want them to see.” he said, “ what young people were doing, fighting the world's most deadly virus, and they didn't run from it.” That’s true. You should see the movie.

We also talked about several other topics, including his views of Muslims and Islam, which I found unnuanced and myopic; his thoughts about Pope Francis, which are hopeful yet circumspect; and his views on the Trump administration and its great wall of Mexico, which are uncritically positive. It will not surprise you to learn that we disagreed. Still, I encourage you to watch the excerpts of the interview at our website and to judge for yourselves. For my part, I found much of what he said to be deeply evangelical, yet insufficiently Christian, especially if charity is the principle mark of Christian discourse. I think he mischaracterizes Islam, for example, painting it as “a very violent faith system.” To my ear, this sounds like an argument by assertion, one that is easily refuted by the reality that a clear majority of Muslims worldwide live in peace.

At the risk of sounding patronizing, I have no doubt that the Reverend Graham’s faith is deeply felt and that his views are sincerely held. But they are, unsurprisingly, far afield from a Catholic worldview. More surprising, perhaps, is that his views appear to be in serious tension with the more inclusive and sophisticated evangelicalism that is associated with his father. What Father Weigel said of the father, in another context, seems to apply in even greater measure to the son: “Graham's sincerity is no guarantee of the accuracy of his understanding.”

Matt Malone, S.J., is the president and editor in chief of America.

Well written and more charitable than I would have been.

"At the risk of sounding patronizing, I have no doubt that the Reverend Graham’s faith is deeply felt and that his views are sincerely held.
But they are, unsurprisingly, far afield from a Catholic worldview."

Indeed, tyrants are always very sincere in their beliefs, sometimes manically so.

"Sincerity is no guarantee of understanding."

A good Jesuitical principle. I think the Society of Jesus should have t-shirts, coffee cups, and even (dare I say it?) hats saying that.

I feel Reverend Graham's views are far afield from "your Catholic views". The reason a majority of Muslims "live in peace", as you say, is due to the fact that a majority of them live with/near other Muslims and the ones that don't (even a different kind of Muslim) are not living in peace. Have you read the Muslim teachings/books? I am a "cradle Catholic" and I find my Prayers more recently are for the confusion Priests such as yourself, Father James Martin and others are "planting". (And not just in this area)🙏🏻

I agree with the comment from Brian Fahey. I also do not understand your comments about Franklin Graham being anti-LGBT. I have heard Graham on several occasions, when pressed on this issue, say condemn the sin but love the person. How markedly different is that from the Catholic view? You also claim that he is anti-Muslim. From the interview, it seems that Graham has read the Koran. He is against a violent religion that offers no salvation. You condemn the idea of a border wall between the US and Mexico, and you mentioned on your radio program today that encounters with strangers are of utmost importance to evangelism. It is time for the Vatican to invite those encounters by removing its walls.

Jesus prays for the unity of believers in John 17:20-26. Your comments about Franklin Graham in this article and on your radio program today were disparaging and arrogant, not unifying and charitable. As a Protestant who is considering becoming Catholic, I was very discouraged.