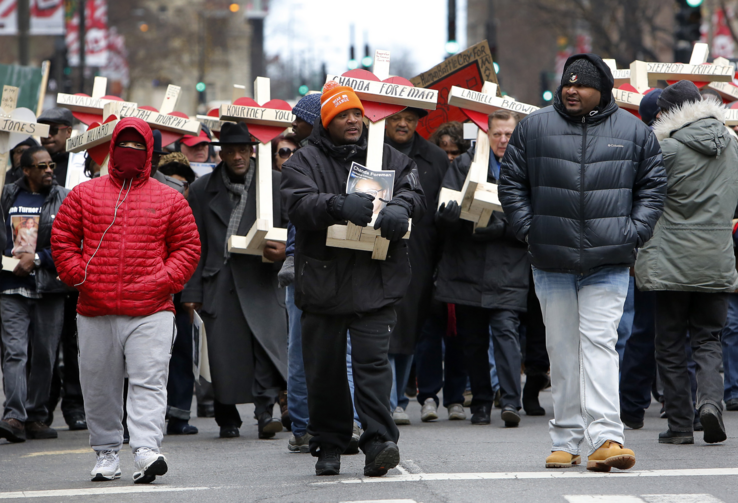 People carry crosses with names of victims of gun violence during a Dec. 31 march in downtown Chicago. Hundreds of people joined the march to remember those who died by gun violence in 2016 (CNS photo/Karen Callaway, Catholic New World).

"Walking the path of peace is not easy, but it is the only authentic response to violence," Pope Francis said in a strong message of support for “the commitment” that Cardinal Blase Cupich and many other local leaders “are making to promote non-violence as a way of life and a path to peace in Chicago.” A major new ecumenical initiative will begin with “a walk for peace on Good Friday in areas afflicted by violence.”

Francis gave his backing to the Chicago effort in an autographed letter to Cardinal Cupich who released it today. In it, he said he knows that “many families have lost loved ones to violence” in Chicago and expressed his closeness to them. He assured the cardinal that as he makes the Way of the Cross in Rome on Good Friday, “I will accompany you in prayer, as well as all those who walk with you and who have suffered violence in the city.”

Speaking to America, Cardinal Cupich revealed that Francis decided to send the letter after learning from him that last year 715 people were killed and 3,662 injured in violence in Chicago, 80 percent of them African-Americans, many under the age of 19, while already this year 123 have been killed and 581 injured.

The cardinal considered it “highly significant” that Francis’ letter is dated April 4—the anniversary of the assassination of Martin Luther King Jr. He drew attention to the fact that the pope quoted Dr. King’s words that humanity “must evolve for all human conflict a method which rejects revenge, aggression and retaliation. The foundation of such a method is love.”

Cardinal Cupich highlighted Francis’ appeal to everyone in Chicago and especially to the young, “to respond to Dr. King’s prophetic words—and know that a culture of nonviolence is not an unattainable dream, but a path that has produced decisive results.” The pope told them, “the consistent practice of nonviolence has broken barriers, bound wounds, healed nations—and it can heal Chicago.”

Francis revealed that he had learned from the cardinal that in Chicago “people of different ethnic, economic and social backgrounds suffer discrimination, indifference, injustice and violence today” and, in the letter, he declared: “we must reject this exclusion and isolation, and not think of any group as “others,” but rather as our own brothers and sisters.” He urged that “this openness of heart and mind must be taught and nurtured in the homes and in schools.”

Cardinal Cupich described the background to Chicago’s violence as complex. Its “roots” are to be found in “unemployment, the lack of opportunity—especially for young people, the breakdown of the family, the whole basis of segregation where people feel locked in the neighborhoods,” but “they really go back to the fact that there are people who feel and suffer from discrimination and segregation in the city.” Indeed, he said, “until we look for and find a way to integrate them into the opportunities that are part of a wonderful city this is going to continue to fester as a problem.”

Furthermore, he said, the violence is also “partly due to the easy availability of firearms, high-powered weapons” and drug and gang culture. Chicago “has good, strict gun laws,” but “the problem is the neighboring states don’t, and so there is a flow of weapons from those areas and from the state of Illinois which does not have as strict gun laws as the city does.” The cardinal added that the drug trade too is “part of the equation because that’s where the money comes from.”

The other part of the problem is “broken families,” Cardinal Cupich said. African-American pastors gave him a chilling statistic: If a child is born into a family where there’s no father or maybe one parent 71 percent of those children will grow up in poverty; but if they have two parents only 7 percent grow up in poverty. “We have to look for ways through our educational system and other social programs to help young people understand that they are going to continue to live in poverty if there’s not a responsible way in which children are born into the world and raised.”

The cardinal is asking all priests in Chicago  “to preach about violence in the city during Holy Week."

Cardinal Cupich said he and other local leaders are seeking “to tackle the root causes that have to do with people feeling excluded or being excluded.” Their common promotion of non-violence “is designed to help people understand that we all have a stake in making progress and going forward.”

With this goal in mind, he said, they have come up with “a package of ways” to address the problem. The package includes: “bringing people together, especially young people, through sporting events, through dialogue,” establishing “a special house for non-violence, in a very difficult part of town,” creating “a venture fund” to foster job creation in those communities. He said, “We’re going to look at our whole curriculum in our schools in terms of racism, so that young people understand the difficulties that racism causes in a community.”

The peace initiative, announced today, will be launched in Holy Week. The cardinal is asking all priests in Chicago archdiocese “to preach about violence in the city during Holy Week,” and on Good Friday he will lead a Way of the Cross in the city, “a walk for peace with pastors of different faith communities, and we’re going to be right there where people were killed, to make them the stations of the cross.” By doing so, “we want to let people know that we can build solidarity with suffering folks so that they are not excluded, they are integrated.”

In the lead up to this launch, Cardinal Cupich said he visited 12 families who have suffered from gun violence and lost children, “and they tell me that in addition to the loss of a loved one, losing a child, they’re also suffering from the sense that their child’s lives didn’t count, they are forgotten.”

“We have to look for a way to reach out to people and assure them that we are with them in these moments of great suffering.”

Sometimes the media have presented these killings as gang-related, he said, “when in fact, in many cases, these young people did not belong to gangs.” They were “collateral damage,” and “many of them are so poor that they couldn’t even afford to bury their children, they didn’t have resources and so that was another way in which they were feeling excluded.”

The cardinal said, “We have to look for a way to reach out to people and assure them that we are with them in these moments of great suffering.” The Good Friday walk is also “an invitation to people to be a part of reaching out to those who are suffering the most.”

While expressing immense gratitude to the Holy Father for his important support, the cardinal recalled that Pope Francis is particularly interested in violence as an issue, as he made clear in his Message for the World Day of Peace. “By his drawing attention to what we’re doing in Chicago,” the cardinal said, “it also allows us to in some way highlight his agenda about non-violence in the entire world.

“It gives us a platform to speak not just about peace-building projects in our neighborhood but, as we are discussing now in the United States, about our budget that includes a massive increase in military spending and the way that is proposed that we cut back on world development aid,” Cardinal Cupich said. “These issues are all linked together, and so by having the Holy Father join in our project we also get to join in his project of peace building throughout the world.”

Correction, April 4: The quote from Pope Francis opening this story has updated to reflect the proper wording of his letter.