How are Pope Francis' reforms of the Roman Curia going? 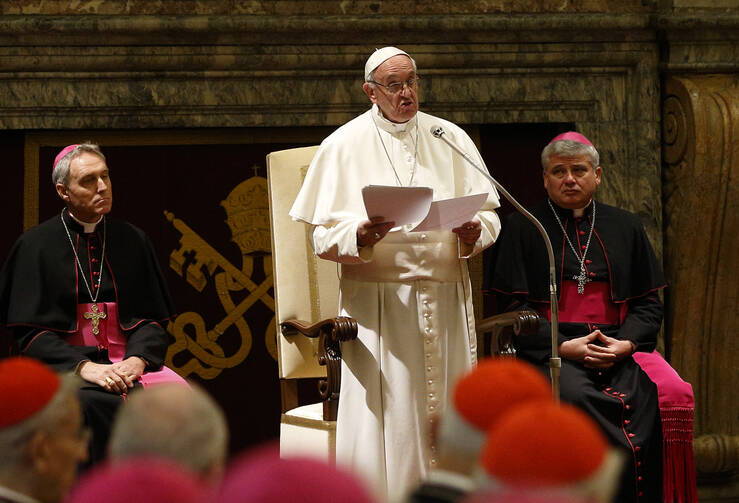 Pope Francis speaks during an audience to exchange Christmas greetings with members of the Roman Curia in Clementine Hall of the Apostolic Palace at the Vatican Dec. 22. (CNS photo/Paul Haring)

Kurt Martens is a Belgian-born lay Catholic civil and canon lawyer who serves as a professor of canon law at the Catholic University of America. He is a consultant to the U.S. Conference of Catholic Bishops’ committee on canonical affairs and specializes in the working and organization of church structures, including published research on the reform of the Roman Curia. He is the editor of The Jurist, the only canon law periodical in the United States.

I recently interviewed Dr. Martens by email about the ongoing efforts of Pope Francis to reform the Roman Curia. This interview has been edited and condensed.

In the 2013 conclave, the cardinal-electors gave Pope Francis a mandate to reform the Roman Curia, inviting him to continue the work that Pope Benedict XVI started. What is the Roman Curia and why does it need reform?

The Roman Curia can be defined as that complex of institutions that assists the Holy Father in governing the whole church. In a way, you could also count the government of Vatican City State, although technically that’s not really the Roman Curia in the strict sense. The current organizational structure is determined by the apostolic constitution “Pastor Bonus,” promulgated in 1988 by St. John Paul II.

The question about the reform is not necessarily a question about changing structures, but may be more, first and foremost, a question about a mentality change. In essence, the Roman Curia must be of service. The Curia serves the pope, the universal church and the particular churches. It is not a coincidence that Pope Francis mentions careerism as one of the diseases of the church. But how do you change that?

I have written on this very topic, underscoring that it is the most difficult reform. That which Pope Francis tries to accomplish is already written down in the preamble of “Pastor Bonus.” You will not be able to write a much better theological text than the one we have now. The Roman Curia is an administration or a bureaucracy, and therefore needs from time to time a reshuffle, to make sure it doesn’t become an institution focused on itself.

Although we often talk about reforming the Roman Curia in the same way we talk about reforming Washington, D.C., or any secular form of government, the Catholic Church is not a secular institution reducible to its external governance. I recently wrote that before any structural changes are made, and before any principles that are already in existing legislation are repealed, we need, to use the words of Blessed Paul VI, to adopt a novus habitus mentis (new mentality). And then we get to the spiritual level.

As a professor who teaches canon law courses on church structures, what are some common misunderstandings you encounter among students about the Roman Curia?

Students, like most people, look at structures as an obstacle. Actually, structures are opportunities to make things happen, provided they’re used in such a way. I am always amazed when students tell me that the Roman Curia is something bad and prevents the church from functioning. Well, every two years, I take a group of students to Rome for a study visit to a number of dicasteries of the Roman Curia. Afterwards, they have to admit that the Roman Curia is different from the image that they had. They also learn that there are many good people working in the Roman Curia. You don’t read about them in the press; only the bad guys make the headlines.

Recent pontiffs have tried and failed to reform the Roman Curia in various ways. What have been some successes and setbacks for Pope Francis so far?

One of the problems with the current reform is that an overall plan is lacking. I also have the impression that there is a desire to reform because of a certain lack of interest or love for the Curia.

I was really pleasantly surprised by the way Pope Francis picked his cardinals: he went to the periphery and picked not the usual suspects. The pope is free to choose his cardinals and should not follow any patterns that may or may not be established. Yet, the last consistory was a disappointment, in that he returned to the usual patterns. Three American cardinals were added to the college, but all three are white men. Pope Francis missed a unique opportunity to create the first Native American, African-American and Latin-American cardinals in the United States.

The last consistory was worrisome from another perspective too: at least one of the new cardinals—the Belgian Jozef De Kesel—has a problematic track record when it comes to child protection and handling abusive priests. What does it mean then for Cardinal O’Malley and his Pontifical Commission for the Protection of Minors? Is that then simply window-dressing? And what to think of all the efforts made by the American bishops in this area? Your Jesuit confrere, Father Thomas Reese, recently wrote that he gave Pope Francis a C+ on reforming the Roman Curia. For different reasons, I think that was quite generous of him.

Although Pope Francis has launched new initiatives to reform the Vatican bank and the Holy See’s media strategy, certain tell-all books have indicated ongoing problems. In your estimation, what’s wrong with the Vatican’s financial system and communications strategy, and what needs to change?

In spite of all the reforms, there is something seriously wrong with the communications strategy of the Holy See. I think Greg Burke [director of the Holy See press office] will be able to do a good job, provided he’s given an opportunity to do so. Simply put, communication can be done much better, and it is not enough to simply put everything related to communication under one umbrella. Style and content also matter. We have so many teaching opportunities, and we don’t use them.

The ongoing problems with the financial reform of the Holy See show the need for something else, namely the need for this novus habitus mentis. The mentality has to change. Moreover, we do not need to simply copy structures and processes from the civil world. Rather, we need to think outside of the box: what do we need, what can we use, how can we fulfill our mission?

Pope Francis has issued a number of canonical documents, on subjects ranging from family life to church reform, which sometimes appear to blur the line between pastoral and doctrinal content. How can ordinary Catholics evaluate the authority of different kinds of Roman documents?

Evaluating Roman documents is like wine-tasting: anyone who goes to buy wine these days for the holidays should not only look at the label on the bottle. That may be a first indication, but does not give the final response. In order to know the wine, you need to taste it. When I use that comparison, students usually get my point. Well, the same goes for Roman and papal documents. The title may give an indication, but you still need to look at the content.

There is a point in the debate surrounding “Amoris Laetitia” that I miss. An apostolic exhortation like “Amoris Laetitia” does not stand on [its own] itself. Some time ago, in the midst of another canonical debate, someone wrote that “a delict [violation] against the sixth commandment of the Decalogue” is not defined in canon law, and therefore cannot be used. That makes me speechless. Of course it is defined. But you have to look at the moral teaching of the church, and you may have to go back quite a bit.

“Amoris Laetitia” can only be seen and interpreted within the tradition of the church. Don’t forget that Cardinal Donald Wuerl, the Archbishop of Washington, has emphasized the pastoral nature of “Amoris Laetitia,” and the fact that no doctrine was changed. In the most recent exchanges in the debate on “Amoris Laetitia,” I was very much impressed by the call for a dialogue by Cardinal Joseph Tobin. What he had to say is worthy of serious consideration.

If you could say one thing to Pope Francis about reforming the Roman Curia, what would it be?

Think like a canon lawyer, and look for solutions for the problems. Stop shooting from the hip, and come up with a comprehensive reform plan. Otherwise this reform of the Roman Curia will be short-lived.

A theology professor once defined canon law in a non-flattering way as the dark side of the good news. I am actually proud of that title; indeed, we take care of the dark side of the good news, we are in the trenches, in the periphery, and we look for solutions for real problems. Nothing is more pastoral than canon law. And above all, we’re not afraid of speaking up and telling the truth.