From the Gospels to Elizabeth Warren, women nevertheless persist

From the Gospels to Elizabeth Warren, women nevertheless persist 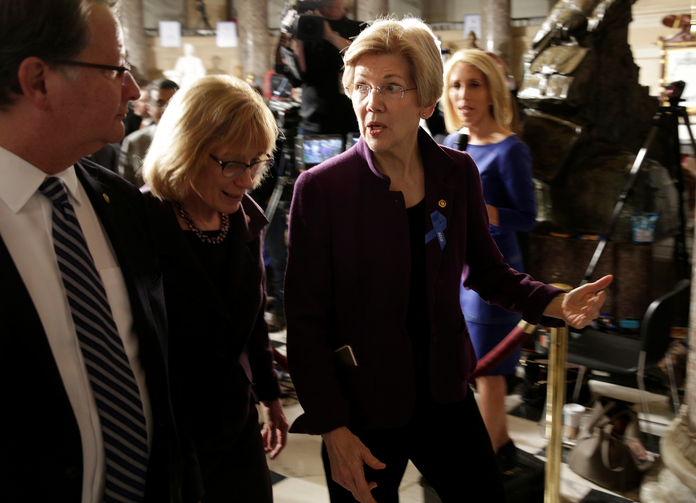 Senate Majority Leader Mitch McConnell inadvertently started something. I imagine Mr. McConnell wishes he had chosen less quotable words to make Senator Elizabeth Warren stop talking during a confirmation hearing for Attorney General Jeff Sessions. “She was warned. She was given an explanation,“ intoned Mr. McConnell in his most monotonous voice. “Nevertheless, she persisted.”

And that is how a catchphrase is born. Also a slogan, a meme, a tattoo, a chant, a protest sign, a rallying cry. Online sites are hawking t-shirts, sweatshirts, jewelry and bumper stickers. Thus sayeth McConnell: Nevertheless, she persisted! It is a phrase we women embrace because persistence is what we do.

I am reminded of the time one of my daughters, when she was a teenager, used a biblical image to strengthen an argument she was making. I cannot remember what she wanted at the time—a later curfew or a raise in allowance—but she kept after me about it, bringing up the topic repeatedly. Finally, she said, “I’m the persistent widow, Mom.” I realized she was alluding to the previous Sunday’s Gospel reading. She had actually been listening to something in church! I was amazed and impressed. Of course, I rewarded her persistence and her tactics.

Stories of persistent women abound in the Gospels.

The widow my daughter was referring to appears in the Gospel of Luke. Jesus prefaces the parable with our “need to pray always and not to lose heart.” The widow does not give up on asking for justice from a corrupt judge. She wears the judge down until he gives in and rules in her favor just to get rid of her. The powerless overcomes the powerful.

Stories of persistent women abound in the Gospels. There is the woman in the Gospel of Mark who suffers from excessive bleeding or a hemorrhage. She has endured much at the hands of many doctors, but she has not been cured. Society shuns her as unclean due to the constant presence of menstrual blood. She persists in getting close enough to Jesus to touch the hem of his cloak, believing in Jesus’ power to heal her. Her persistence and faith are rewarded.

There is the Canaanite woman in the Gospel of Matthew, a foreigner, who persists in believing that Jesus can help her daughter. Jesus answers that he was sent only to the Jews. “It is not fair to take the children’s food and throw it to the dogs,” he tells her. The disciples want Jesus to get rid of this pesky woman. But she persists: “Yes, Lord, yet even the dogs eat the crumbs that fall from their masters’ table.” Because of her faith, Jesus heals her daughter. Her persistence validates Jesus’ redemptive role for those who are not Jews.

There is the nameless woman in the Gospel of Luke, weeping and wordless, who washes Jesus’ feet with her tears and dries them with her hair. She kisses his feet and anoints them with oil. She persists in caring for him, even when Jesus’ dining companions condemn her as a sinner. Jesus forgives her sins, saying, “Your faith has saved you; go in peace.”

There are the women in the Gospel of John who persist in following Jesus all the way to the foot of the cross when most of his other followers have abandoned him. Among them is Mary, the mother of Jesus, who loves her son with the persistent love we women hold for our children and reflects the parental love that God has for us.

Throughout the Gospels, Jesus blesses the persistence of women when he equates it with faith, with prayer, with not losing heart. Atypically for his time, and in spite of the men around him who consistently want the women to be quiet and go away, he listens to women. He converses with women. He acknowledges the worth of women. He understands that persistence is deeply tied to faith. Indeed, to this day, persistence in the cause of love and mercy requires a lot of faith and prayer and heart.

We women persist. Isn’t that our job? Throughout history, we have persisted in our quest for respect, for justice, for equal rights, for suffrage, for education, for enfranchisement, for recognition, for making our voices heard. In the face of violence, of opposition, of ridicule, of belittlement, even of jail time, nevertheless, we have persisted.

And it is not over. It is perhaps never over! The many struggles of women continue around the world. We may suffer dissuasion and discouragement and defeat. We will be warned and given explanations. Nevertheless, we persist.

I'm afraid you are right, Valerie. It will never be over. Women will continue to have to persist, and resist, the dark forces that seem to be gathering in our country, and possibly in some of the other nations of the western world.

Jesus is God - that is why he talked to women and treated them with equal dignity. Women are equal in the eyes of God, though that is seldom true in this world.

Women are persistent because it is a necessity. The human race would not exist if it were not for the persistence of women. Another notable fact about the women in the Gospel stories is that they reinforce the saying that "well-behaved women seldom make history." The women may not be obedient in the eyes of society, but they are able to relate to Jesus and recognize him as God. There is a lesson in that as well.

Our Blessed Mother and other holy women do not need an Elizabeth Warren meme to explain their greatness.

Kevin, Yes. to say more would invite more of what we get from Ms. Warren.

If the Catholic Church could implement only one reform, it should be to have the male clergy and female nuns swap roles for awhile.

The male clergy has had 2,000 years to show what they can do. Lately they've been making a pretty big mess of things. It's time for new faces at the top, female faces.

If you'll forgive this free advice, it's time for women to shed the victim role. You are about to inherit leadership of this planet on almost every level. As example, women are out performing men in higher education, the training ground for tomorrow's leaders. Prepare yourself to run the show, because men are running out of gas, and are not well suited to the modern era.

From my experience with nuns, they are the primary reason that there is so little clamoring for women to be priests.