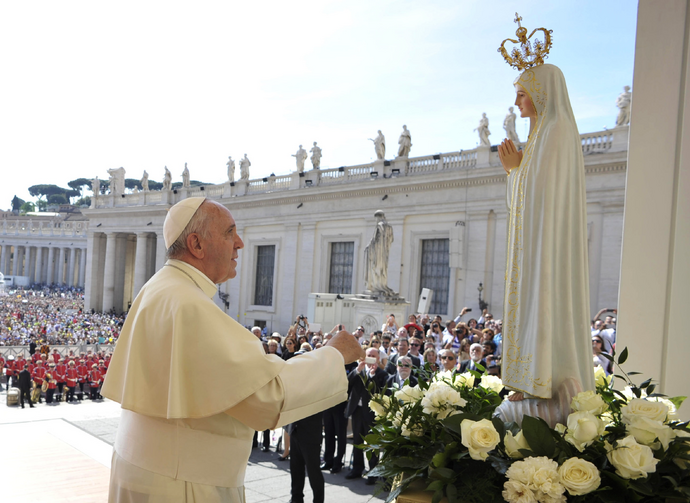 Pope Francis prays in front of a statue of Our Lady of Fatima during his general audience in St. Peter's Square at the Vatican May 13. The statue, which was present for the May 13 feast of Our Lady of Fatima, is a copy of the original in Fatima, Portugal. (CNS photo/L'Osservatore Romano, pool)

Pope Francis will canonize two of the three Portuguese shepherd children—Jacinta Marto and her brother Francisco—to whom Our Lady appeared at the famous shrine in Fatima 100 years ago. Though the Vatican has not said so yet, it is likely that he will do so during his upcoming visit to that shrine on May 12 to13.

The Vatican announced today, March 23, that the pope has opened the door to the canonization of the two children when he formally recognized the second miracle attributed to their intercession at a meeting with the Prefect of the Congregation for Saints, Cardinal Angelo Amato.

The two children died young, as Our Lady had told them. The third, Lucia, wrote down the three secrets of Fatima. She was the only one to reach adult life, and became a Carmelite nun. Lucia was born in 1907 and died in 2005, and the cause for her beatification is now well under way. The first two secrets were a call for prayer and penance to save the world from even greater disaster and an end to World War I. The third secret, which attracted the most attention, spoke about the sufferings of the church and the assassination of a pope.

St. John Paul II, who understood this vision as referring to himself, beatified the two children at the Fatima shrine on May 13, 2000, after recognizing a miracle to their intercession. On that day, the Vatican also announced that the third secret would be revealed soon after by Cardinal Joseph Ratzinger.

When Pope Francis canonizes them, they will become the youngest children (apart from martyrs) ever to be recognized as saints by the church. Jacinta died at age 9, on Feb. 20, 1920, while her brother Francisco died at age 10, on April 4, 1919.

Our Lady appeared to the three poor children several times between May 13, 1917, and Oct. 13, 1917. During the final apparition,“the miracle of the sun” took place and was witnessed by the children and as many as 100,000 people, media reports of the time state.

Jacinta and Francisco were spiritual martyrs. The sacrifices the children made for sinners, their conversion and adoration of God were not small: play was abandoned, corporal penace practiced, health lost and, ultimately, death was accepted. As men slaughtered each other during World War I and murderous nihilists took control of Russia, how many lives and souls did God spare because of those three little helpers of Mary? Our Lady told the children that God was pleased by the sacrifices they practiced.

Did the illiterate children of Fatima not rebuke the philosophical argument of Dostoyevsky's Ivan Karamazov, base of the character's rebellion against God? (Rejection of redemption obtained, in part, with the collaboration of the innocent through suffering, especially of children). Of course, being fair to the sophisticated Ivan, gifted author of the poem on the Grand Inquisitor, how could he have imagined the heights evil would reach some decades later?

William Walsh's now-70 year old book "Our Lady of Fatima" still holds up as one of the most cogent accounts of the three shepherd children who encountered Our Lady at Fatima. Walsh also had the opportunity to interview Lucia (then a nun) on several occasions and to gather other first-hand information even though 30 years had passed since the apparitions. The book is well worth the effort and is readily available in paperback from amazon and other retailers. We used it as a monthly selection about 10 years ago in our parish book club, and it was a big hit.

1
Bishop McElroy: Abortion is a pre-eminent issue for Catholics. But not the only one.
Sebastian Gomes
2
Can a pro-life Catholic vote for Joe Biden? Vatican II has an answer.
Kathleen Bonnette
3
I was educated by abusive priests. What should I do with the gifts they gave me?
Francis X. Sullivan
4
Do Catholics have to vote for Trump? Three points to consider.
John F. Crosby
5
Jeannie Gaffigan: My loved ones told me ‘real’ Catholics vote for Trump. Here’s my response.
Jeannie Gaffigan