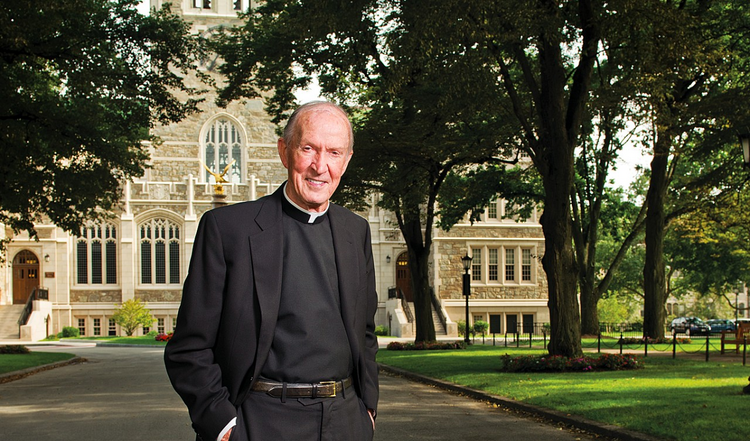 Boston College is reporting that J. Donald Monan, S.J., its 24th president, has died at 92.

In a press statement, the Jesuit university credited Father Monan. with “saving the university from fiscal crisis and guiding it into a period of...unparalleled financial and academic success.” He also “completed the transition from a financially strapped, predominantly male commuter college to a prosperous, coeducational and nationally renowned university.”

Father Monan was born in Blasdell, N.Y., in 1924 and attended Canisius High School in Buffalo before entering the New York Province of the Society of Jesus at St. Andrew-on-Hudson. He was ordained a Jesuit priest in 1955 and later earned a doctorate in philosophy at the University of Louvain in Belgium. He joined the philosophy department at Le Moyne College, in Syracuse, N.Y., in 1960 and was appointed the college’s academic dean and vice president seven years later. In 1972, he was offered the position as president of Boston College.

A complete obituary from Boston College is here; some excerpts are below.

[Fr  Monan] sought a national reputation for Boston College, not only for superior academics, but as a distinctly Catholic and Jesuit institution focused on students' moral and ethical development. He tightened faculty promotion and tenure requirements, sharpened the curriculum, and capped undergraduate enrollment to allow the university to focus on recruiting high-caliber students.

Fr. Monan's second decade at BC saw the University enjoy increased national visibility, thanks in part to the success of its football team and its Heisman Trophy winner Doug Flutie during the mid-1980s. But it was BC's academic strength that continued to attract students from across America and the world, coinciding with the University's efforts to diversify the ethnic and cultural backgrounds in its student body. By the time he stepped down, some 20 percent of the full-time undergraduate population was African-American, Asian, Hispanic or Native American students, a marked change from past decades.

Fr. Monan made his presence known outside of the University as well, staying active nationally on a number of educational and social issues, especially Catholic higher education. He served as a delegate to the Vatican Congregation for Catholic Education meetings with Pope John Paul II to prepare the 1990 papal document on Roman Catholic higher education. Fr. Monan served on the US Conference of Catholic Bishops' committee charged with implementing that document—Ex Corde Ecclesiae—to American Catholic colleges and universities.

On many occasions, Fr. Monan embodied the University's allegiance to the Jesuit belief in social justice. Following the November 1989 slayings at the University of Central America in El Salvador, Fr. Monan was among a group of Jesuits who visited the scene of the tragedy. He became a vocal critic of the Salvadoran government's investigation of the case and he eventually urged the United States Congress to withhold aid to El Salvador until the Jesuits' murderers were brought to justice. In 1993, he delivered the keynote address at a Washington, DC, gathering in tribute to US Rep. Joseph Moakley of Massachusetts for his efforts to combat human rights abuses in El Salvador.