Sister Simone Campbell: Women can bring about a “contemplative renewal” in the church 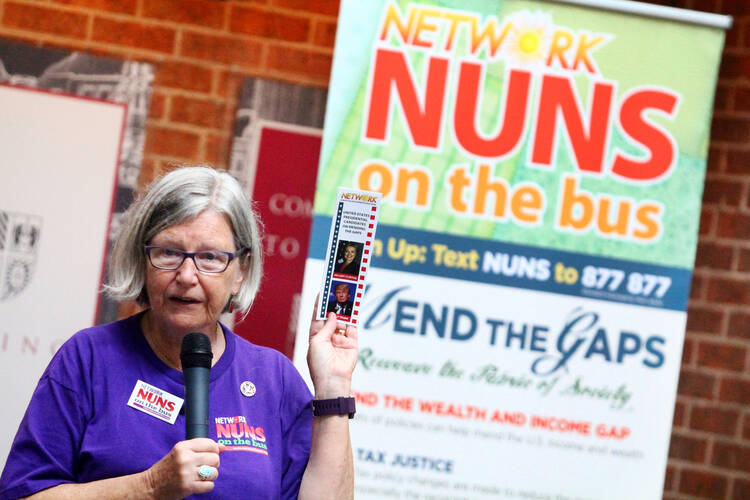 Sister Simone Campbell, a member of the Sisters of Social Service and executive director of Network, participated in the Voices of Faith conference in the Vatican on International Women’s Day, March 8. Afterwards, in an interview with America, she shared her reflections on this experience, on the place of women in the church and on her lobbying work in Washington, D.C., for the pressing issues of health care and migrants.

It was the California-born sister’s first time speaking in the Vatican, and even though this was not a Vatican-organized event, and no members of the Roman Curia were present (they were on retreat), it was nonetheless a deeply moving experience, she said, particularly in the light of the Vatican’s investigation and censure of women religious like her in 2012 and of her experience as the public face of Nuns on the Bus.

Referring to the investigation, she confided: “I have to tell you that I was talking to one of the religious women before our panel [at the conference], and I just started to cry because there’s a way in which I stayed focused on mission and didn’t let the hurt sink it. But being here is a treasure, it’s a huge treasure to me and to women in the United States.”

Before coming to Rome, she had traveled to Bend, Ore., to address a secular women’s gathering of some 350 people and she recalled that when she told them that she was going to the Vatican to give a talk “the place erupted.” This made her realize that “the hurt of the censure and the investigation touched all women in our country, and yet the bus is healing, this is healing, and maybe things are changing.”

“Francis’ leadership is critical, but we need more. We’ve got a good man at the top, but we’ve trouble with middle management.”

“Francis changed it!” she stated. One can see how he is doing this when one looks at “his four steps for peace-building in ‘The Joy of the Gospel.’” She listed all four: “The first is dialogue, which is more important than protecting your turf. The second is hunger for unity, and I thought this was going to be the easy one, but I discovered that the hunger for unity means I must give up my desire to win, and part of me wants to win. The third is reality stories are more important than theory, hearing people’s stories. And the fourth is the whole is greater than the parts, and if you’re missing a part you don’t have the whole, so we can’t build peace unless everyone is there.”

“Francis’ leadership is critical, but we need more. We’ve got a good man at the top, but we’ve trouble with middle management,” she remarked.

At the conference, she perceived not only great joy at the courageous work that is being done by women of faith of all ages across the world, she also detected “some sadness, because there is a feeling that the church is getting left behind. Everyone else is waking up to women’s leadership, but our beloved church, slow as it is, is not benefitting from the opportunity.” But, she added: “I have to say that the church has always nourished me to move to take the Gospel to places where it wouldn’t be otherwise. So, if we’re not wanted here we get pushed out to live it in other full ways.”

In “The Joy of the Gospel,” Pope Francis speaks about the urgent need for a conversion of the papacy and of the bishops, priests, religious and laity. He’s calling for a spiritual-cultural conversion or revolution, though he doesn’t put it in quite that way, she said, “whereas so many of our leaders have gotten more into the rules.”

Sister Campbell, whose religious congregation is rooted in the Benedictine tradition, said that “the biggest problem is mistaking spiritual leadership for rule enforcement; they don’t know the real spiritual high, the journey of the contemplative way of knowing what the Spirit who is alive in our midst is about.”

At the conference, after listening to women refugees from Rwanda, Syria and Burundi, a millennial woman from Australia and two older women from India and England talk about their struggles for justice and what their faith has meant to them, Sister Campbell remarked, “I really believe that the church needs a contemplative renewal, and maybe that’s what women are going to bring to it.”

The contemplative way has been an integral part of her own life journey. It was so back in 1978 when, after gaining her doctorate in law, she founded the Community Law Center in Oakland, Calif., and for the next 18 years was its lead attorney, serving the poor. It has been so also since 2004, when she began her work as executive director of Network and a lobbyist on Capitol Hill. “I lobby from a contemplative stance in D.C., and it’s about the deep listening to the Spirit moving among us, to the deep needs of our people, and letting your heart be broken. That’s what we’re called to do,” she said.

She returns to Washington energized by the conference but keenly aware that she faces two major challenges relating to health care and migrants.

Speaking about the current situation in the United States, she believes “the big problem is the wealth of some, and therefore the individualism and the isolation, and when you’re isolated as an individual you’re frightened, and you pull up the drawbridge and you pull away. If you don’t know that somebody has your back, you’re going to be angry and protective, so what we need to do is to let people know that I have your back, you don’t have to worry, it’s O.K., we’re in it together.”

Sister Simone defined health care as “a communal good,” but said, “we don’t have a sense of community right now.”

As women religious, she said, “that is what we try to do in Capitol Hill and around the country; we try to help people know that we’ll stand together...especially on something like the Affordable Care Act.”

She defined health care as “a communal good,” but said, “we don’t have a sense of community right now.” She went on to denounce as “horrifying” the current proposals being presented by the Republicans, because “it’s all about the individual, taking care of the individual, and giving big tax breaks to those at the top, to the very people that don’t need it. It is further exploitation of the poor to benefit the rich. That’s just wrong. It’s wrong by any moral standard.”

Turning to the migrant question, Sister Campbell recalled that she had spoken to the two young Syrian women, sisters, present at the conference, about the sufferings they had endured in the war in their homeland and the hazardous journey they had undertaken by boat from Turkey to Greece in search of a better life. “It’s so wrong what happened to them; they haven’t digested it yet, it is too close. And yet we in the wealthy nations are so arrogant, so unwilling to share the resources that we have.”

Referring to those fleeing poverty, she believes that “part of the problem is that we in the United States have never accounted for global television. We export all these shows across the world and then act surprised when people want to share in our prosperity. Hungry people who have no hope will move, desperation calls for desperate measures.”

She and her sisters are also working on the immigration issues. “We are working with those who are bringing lawsuits to stop the new mandate which is about refugees, and we’re also working with Senator [Lindsey] Graham, who’s actually talking about moving a bill for immigration reform. But the politicization in the House of Representatives is the big stumbling block.”

She concluded: “This is an issue for the whole church in the United States. How can we turn a blind eye to people who are part of our community? We cannot!”

Contemplative thought would reveal the value and miracle of life in the womb. Those pesky rule abiding middle management guys with all their rules keep reminding sister of that.

I hope you are sitting down when you read this. Good old JC performed a miracle or two for life outside the womb.

Contemplative thought might also reveal that a religious vocation is not only about social activism but about keeping the basics when it comes to a religious vocation. I'm especially thinking about the discarded religious habit. The good Sister need not look like a dock worker.

Regarding health care and immigration and the responsibility of Catholics: it is important to distinguish between end and means. By definition a Catholic strives to work with others to help people attain their needs on all levels. Catholics will differ on the the most effective way of achieving this. They will also recognize that we have different gifts to help the community achieve the goal. Contemplative prayer, after the example of Mary who kept all these things in her heart, is absolutely essential to keep one attuned to the task.