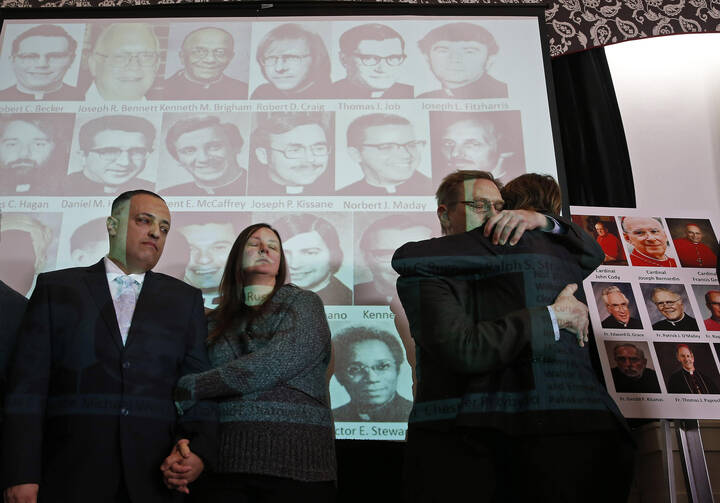 Carmen Severino, an abuse survivor, is embraced during a news conference that heralded the release of thousands of documents from the Chicago Archdiocese on past cases of clergy sexual abuse in January 2014. (CNS photo/Jim Young, Reuters)

Mrs. Burke, who is from Chicago, was an interim chair of the National Review Board that investigated allegations of clergy sexual abuse in the United States and oversaw church compliance with reforms called for in the bishops’ Charter for the Protection of Children and Young People. Commenting on the resignation earlier this month of Marie Collins, the only clergy abuse survivor serving on the Pontifical Commission for the Protection of Minors, she said, “Why would you do something so drastic as step down? It is because you have been so frustrated.”

Ms. Collins, who is from Ireland, resigned in protest, citing a “lack of cooperation” on the part of the Roman curia. Ms. Collins reportedly was concerned that Vatican officials were not responding to letters from sex abuse victims and were blocking efforts to censure bishops who failed to respond adequately to abuse allegations.

“Why would you do something so drastic as step down? It is because you have been so frustrated.”

According to Mrs. Burke, Ms. Collins’ complaints “mirror” concerns she and other members of the National Review Board raised in the early years of the abuse scandal. “The whole thing spoke to me of ‘nothing’s changed.’”

Mrs. Burke said she was not opposed to clergy serving as liaisons to sex abuse review boards, but that decision-making should rest with lay members who have the independence to investigate and issue findings and recommendations.

“Until the trust is returned that the bishops will do the right thing, these same kinds of things will happen if you have clergy in charge,” she said.

The National Review Board she served on had no clergy members.

“We wanted the laypeople to trust us, to trust that we represented them and had their interests at heart and would make recommendations based on our perceptions,” Mrs. Burke said. The review board also enlisted the John Jay College of Criminal Justice for independent help with its investigations.

Pope Francis appointed a papal commission in 2014 to address clergy abuse allegations worldwide. The pope said bishops who failed to respond adequately to abuse cases would not escape censure.

Mrs. Burke praised the pope for his efforts to draw international attention to the problem of sex abuse and to focus on the role bishops have in addressing allegations.

“Pope Francis is doing the right thing and sending a message out, but he needs disciples, whether lay disciples or cardinals or bishops or priests in the world, to really engage his mission to protect children,” she said. “He clearly loves children. He clearly understands, but trying to find the right disciples is a very difficult thing. I think it will happen if he continues trying to find the right people around the world. That is hope in itself.”

Mrs. Burke insisted she is not making a sweeping condemnation of the hierarchy but noted that some bishops have moved more quickly than others to address survivors’ concerns.

She praised Cardinal Blase Cupich of her home Archdiocese of Chicago, who, she said, “is doing great things. He has rekindled my hope, at least for my own archdiocese.… When you are trying to change a bureaucracy and a culture of 2,000 years, it’s difficult.”

Mrs. Burke said she was particularly disturbed by Ms. Collins’ assertion that bishops were not responding to letters sent by alleged victims.

“I would think a shepherd...would be trying to engage people,” she said, offering hope and promoting trust. “That would be a normal, human reaction,” she said.

She said church officials who are not up to that pastoral work should be removed from the papal commission.

“How do you tell somebody to feel sorry for someone else or have compassion or empathy?” Mrs. Burke asked. “They should know that already. If you have to tell somebody to respond to someone who is hurting, that is unconscionable. They should be removed. This is not what our church is about,” she said.

Ms. Collins is the second clergy abuse survivor to leave the pontifical commission in less than a year. Peter Saunders, a survivor of clerical abuse from the United Kingdom, who was also critical of Vatican officials, was asked by his fellow commission members last year take a “leave of absence” from the panel.

In a statement, Cardinal Seán O’Malley of Boston, the head of the pontifical commission, thanked Ms. Collins for “the extraordinary contributions she has made as a founding member of the commission.”