Pope Francis warns of a 'major world war for water' 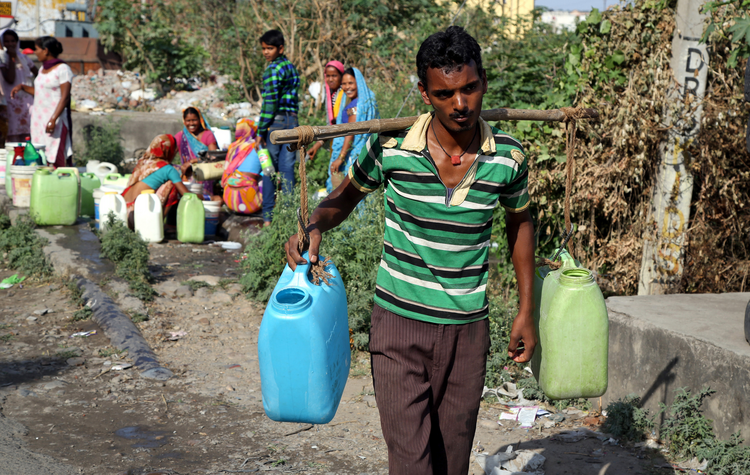 A man carries containers filled with drinking water after taking it from a public tap at a roadside in Jammu, India, May 23, 2016 (CNS photo/Jaipal Singh, EPA).

Pope Francis has warned that we could be moving toward “a major world war for water.” He did so when addressing participants at the concluding session of an international seminar on “the human right to water,” held at the Vatican’s Pontifical Academy of Sciences on Feb. 23 and 24.

“I ask if in this piecemeal third world war that we are living through, are we not going toward a great world war for water?”, the pope said, departing from his prepared text. Specialists in the field have already predicted that some of the major armed conflicts in the future could be over the possession of or access to water, but this is the first time that Francis has spoken in these terms.

Addressing 90 experts from many countries, Francis emphasized “the urgent need” to address this issue because “all people have a right to safe drinking water,” but this right is not guaranteed today. He cited United Nations statistics that assert “each day a thousand children die from water-related illnesses and millions of persons consume polluted water.” These “troubling” statistics cannot leave people “indifferent,” he said.

He spoke while standing between Brazil’s Cardinal Claudio Hummes, who sat beside him at the conclave and is the director of the conference, and Archbishop Marcelo Sànchez Sorondo, the Argentine-born chancellor of the pontifical academy. He thanked participants for pooling their knowledge and resources on “the human right to water and the need for suitable public policies in this regard” and hailed their work as “necessary and of paramount importance so that others can live.”

“All people have a right to safe drinking water,” Pope Francis stated.

Recalling that the Book of Genesis tells us that “water was there in the beginning,” he said the questions before the conference are “basic and pressing”—basic “because where there is water there is life, making it possible for societies to arise and advance,” and pressing “because our common home needs to be protected.” Speaking from his own experience of life in the shantytowns of Buenos Aires, other parts of Latin America and Africa, he added that “not all water is life-giving, but only water that is safe and of good quality.”

“All people have a right to safe drinking water,” Pope Francis stated, and this is “a basic human right and a central issue in today’s world.” He also said it is a problem that affects everyone and is a source of great suffering in the world today, and it “cries out for practical solutions capable of surmounting the selfish concerns that prevent everyone from exercising this fundamental right.”

At the conference, several speakers had denounced the fact that private corporations and companies have taken possession of, or control, water resources in many countries, often with the cooperation of government, all seeking to make maximum profit out of this essential good.

“Water needs to be given the central place it deserves in the framework of public policy,” Francis stated. “Our right to water is also a duty to water. Our right to water gives rise to an inseparable duty. We are obliged to proclaim this essential human right and to defend it—as we have done—but we also need to work concretely to bring about political and juridical commitments in this regard.”

Pope Francis declared that “every state is called to implement, also through juridical instruments, the Resolutions approved by the United Nations General Assembly since 2010 concerning the human right to a secure supply of drinking water.” In like manner, he said, non-state actors “are required to assume their own responsibilities with respect to this right.”

In his encyclical “Laudato Si’,” Francis insisted that “the right to water is essential for the survival of persons and decisive for the future of humanity,” and said it is necessary to give “high priority” to educating future generations about the gravity of the situation.

A Planetary Pope: When Francis speaks on the environment
Christiana Zenner

Departing from his prepared text a second time and referring to deaths from polluted water,, Francis told participants, “we have to halt and reverse this situation. It is not too late, but it is urgent to realize the need and essential value of water for the good of mankind.”

Francis emphasized that “respect for water is a condition for the exercise of the other human rights. If we consider this right fundamental, we will be laying the foundations for the protection of other rights. But if we neglect this basic right, how will we be able to protect and defend other rights?”

There is a need to develop “a culture of care and encounter” around “all the necessary efforts made by scientists and businesspeople, government leaders and politicians,” he said. It is necessary, he said, “to unite our voices in common cause.”