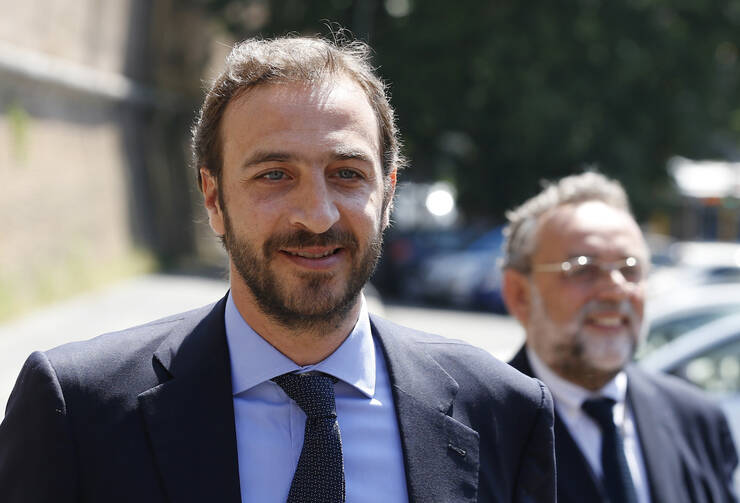 Emiliano Fittipaldi, one of the two Italian journalists charged in the Vatileaks 2 trial, has written a new book called Lust (Lussuria) in which he accuses several high-ranking prelates in the Vatican, Italy and elsewhere, some close to Pope Francis, of covering up or undermining investigations of priests under their jurisdiction who sexually abused minors over past decades.

In the 200-page book, published on Jan. 19, Mr. Fittipaldi recycles stories already published in the Italian or international media about the abuse of children and minors by clergy and recounts denials or cover-ups related to these crimes. Some cases date back 40 or more years; others are more recent. He also cites scandals of adult homosexual behavior involving clergy.

The Vatican has declined to comment on the book, but an authoritative source in Rome who wished to remain anonymous told America that he was struck by the “animus” against the church and the Vatican that comes through page after page of Mr. Fittipaldi’s book. He noted moreover that the author gave scant attention to the significant progress made on this problem over the past 16 years, starting under John Paul II and followed with greater impetus by Benedict XVI. Progress on ensuring a safe environment for children throughout the Catholic Church is moving forward under Francis, who is pursuing a “zero tolerance” policy on reports of abuse.

Though clearly a commercial venture, Lust nonetheless makes sad reading and raises some questions. Mr. Fittipaldi charges that there is “more than one crack” in the pope’s efforts against abusive priests and negligent bishops, and he points to some questionable papal appointments. He also notes that, according to figures provided by the Vatican itself, hundreds of denunciations involving abuse continue to arrive at the Congregation for the Doctrine of the Faith annually, including some 1,200 cases between 2013 and 2015. An informed source at the Vatican interpreted this high number as a sign that victims have greater confidence in the system and believe the church will act on them.

Mr. Fittipaldi criticizes the Commission for the Protection of Minors, set up by Francis in 2014, for having met in plenary session only three times, but ignores or is unaware of the significant work done by its members between these sessions, described at press briefings and reported on its website www.protectionofminors.va. He blames the commission for not being able to establish via Vatican legislation the obligation of every bishop to report predator priests to the judicial authorities, but he gives little weight to the fact that a commission proposal to hold bishops accountable was accepted and enacted into law by Pope Francis.

Mr. Fittipaldi charges, moreover, that instead of punishing several prelates named in the scandal of clergy sexual abuse of children, Pope Francis has promoted three of them to the Council of Cardinals (“the C9”) that advises him on the reform of the Roman Curia and on questions relating to the universal church. The three cardinals are: George Pell of Australia, Francisco Errázuriz Ossa of Chile and Óscar Rodríguez Maradiaga of Honduras.

The author devotes the first 50 pages of his book to Cardinal Pell, revisiting allegations widely reported in the Anglophone and Italian media at the time of the Royal Commission hearings in Australia and in Rome. The cardinal has flatly denied the book’s allegations.

On Jan. 15, his office issued a statement calling Fittipaldi's work “a particularly shoddy and dated piece which merely restates false allegations against the cardinal in a blatant attempt to blacken his name and reputation.” The statement underlines that the allegations were investigated by the civil authorities in Australia and the Royal Commission but did not result in any “adverse findings” against the cardinal. The statement also suggests that some attacks against the pope, the Vatican and the cardinal arise out of resistance to the reform of Vatican finances and charges that opponents to reform “have long used lies, smears and public attacks, as diversionary tactics.”

In the second chapter, on “the untouchables,” Mr. Fittipaldi turns the spotlight on Cardinal Errázuriz for his alleged failure in the case of the well-known Chilean priest Fernando Karadima, who was under the cardinal’s jurisdiction when accused of the abuse of minors. The author charges, too, that Cardinal Maradiaga once allowed a predator priest and fugitive from justice in Costa Rica to work in a parish in a diocese in his metropolitan area.

Mr. Fittipaldi also writes about four other cardinals who “did not denounce predator [priests]” and sought to protect their churches from compensating victims out of diocesan finances. He refers to “the contradictions” of Cardinal Timothy Dolan of New York and the “complicit silences or cover ups” of Cardinals Philippe Barbarin of France, Domenico Calcagno of Italy and Godfried Danneels of Belgium. He claims that Cardinal Dolan approved the payment of $2.1 million to lobbying groups engaged to block or modify legislation that would have removed the statute of limitations for U.S. victims to report their abusers.

The fourth chapter, devoted to “The Gay Lobby,” highlights several well publicized cases, including that of the Polish monsignor, Krzysztof Charamsa, an official of the Congregation for the Doctrine of the Faith, who announced he was gay on the eve of the last synod on the family. He also writes about Archbishop Nienstedt of Saint Paul and Minneapolis and his auxiliary, who were forced to resign because of their failure to deal properly with priests who abused children. He criticizes the way the then-nuncio, Archbishop Carlo Maria Viganò, handled this affair.

In this same chapter, Mr. Fittipaldi devotes a section to the Italian church and mentions several bishops accused of mishandling cases of abuse in their respective dioceses. Drawing on documentation from Italian courts already published in the press, he reports that over the past 20 years some 200 Italian priests have been convicted for the sexual abuse of minors. He laments that this news has gained little public attention.

Mr. Fittipaldi was brought to trial in the Vatileaks 2 case for illegally publishing confidential documents in his book Greed that formed part of Pope Francis’s investigation and effort to eliminate corruption and financial mismanagement within the Vatican. A Vatican tribunal acquitted him, determining that it lacked jurisdiction in his case.

In this new book, Mr. Fittipaldi turns again to the money question, this time as it relates to sexual scandal. He recalls the much-publicized case of a southern Italian bishop, Monsignor Calogero La Piana, who was left a substantial, though contested, inheritance by a rich man with whom he had had a homosexual relationship for many years. The bishop was forced into early retirement by the Vatican.

In an article published in L’Espresso, an Italian left-wing weekly, on Jan. 15, Mr. Fittipaldi summarized his book. He concludes that “the system by which the ecclesiastical hierarchy protects the rotten apples still fully functions, notwithstanding bland attempts to dismantle it.”

It should be noted that the Italian publisher, Feltrinelli, includes a disclaimer at the front of the book, noting that among the investigations Mr. Fittipaldi cites “some not yet concluded...all the persons involved and/or cited...are to be considered innocent until the definitive sentence.”