Why won't my son sing in church? 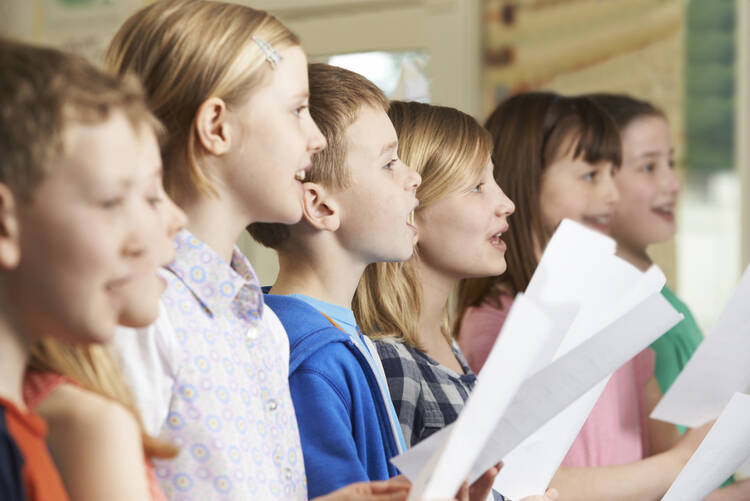 My son hates to sing. And the place Bobby hates to sing the most is in Mass. For years I tried a variety of ways to get him to sing with me to no avail. He looked around and saw the typical Catholic Mass-goer soundlessly mouthing the words or stoically staring at the altar.

I tried to have contests with Bobby  to see who could sing louder. I tried encouraging him to sing along with me as I set the example in my off-key voice. I tried the stern look. I tried the reproaching comment, “Sing!” I tried…

But then Bobby met Mr. Morris. One day Mr. Morris saw me battling with Bobby to sing at Mass. Mr. Morris was looking for a boy to round out the voices in the choir so he asked Bobby, “Would you like to sing in the choir?”

You can imagine my surprise at the request. Bobby looked at me in wide-eyed terror and couldn’t find the words to respond. Finally, he looked at Mr. Morris and meekly said, “Umm, maybe? I don’t know.” So Mr. Morris and I defused the situation by making small talk and wishing each other a happy Sunday.

When I say Bobby hates to sing, I don’t mean that he hates music. He’s a third year violinist. He doesn’t practice much, at least if my wife or I don’t get on him about it, but he actually plays pretty well when he finds a song that piques his interest. Bobby asked me at the beginning of his second year if he could play the violin in church and I half-heartedly responded, “We’ll see.”

Mr. Morris was patient, and after a few weeks we ran into him at the barber shop and he started talking about music. While Bobby got his hair cut, Mr. Morris and I chatted and I told him that Bobby plays the violin. Mr. Morris’ eyes lit up like a halogen light and he asked, “Would he play the violin in church? I’m trying to supplement the chorus with some instrumental accompaniment.” I looked at Bobby, and he nodded his head so vigorously he almost ended up with an unintended buzz cut.

Two weeks later, Bobby attended his first Saturday practice session. He was in his element—the center of attention with a chance to show his stuff. Never mind the missed or off-key notes; he found a new way to enjoy himself, say a prayer and contribute to the church community.

A beautiful friendship developed. Mr. Morris got Bobby in the chorus, and Bobby does not have to sing in Mass anymore. He jumps at the opportunity to go to Mass every week. He even likes the Saturday morning practice sessions. I asked Bobby if he is learning anything from his new role at church. He replied, “Yes. I guess I’m learning to sight read music better, which is helping me for the band competition we’re doing in school. You don’t yell at me as much, either. And you can’t yell at me to sing in church.” He has a way of boiling things down to simple truths.

Mr. Morris says that Bobby has advanced beyond his peer group to play increasingly complex songs. He told me, “I set a goal for Bobby to play an organ-violin duet at a special concert in the chapel, but Bobby doesn’t know it yet. He’s more capable than he knows.”

Matthew 19:14 tells us that Jesus said, “Let the children come to me...” I will never claim to be the perfect parent, let alone the perfect Catholic parent. But I did get one thing right. I stopped trying to force him to participate in Mass the way I participate in Mass. I stopped trying to force him into being me. I gave up trying to take Bobby to God and let him find his own way to Him through the calm, teaching demeanor of an unassuming but great man.

Bob O'Brien
Show Comments (
1
)
Comments are automatically closed two weeks after an article's initial publication. See our comments policy for more.
Beth Cioffoletti
5 years 6 months ago
That's interesting. I wonder if there is a way to entice all of us lapsed adults back into the community?