The church should not strive for “false clarity,” says Australian archbishop 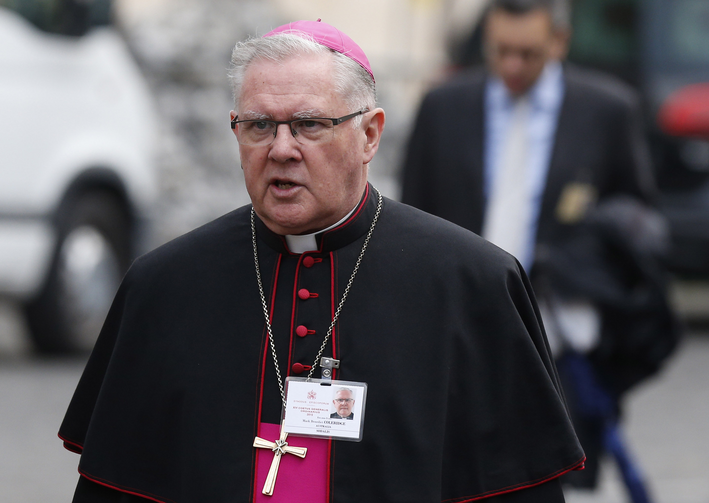 Archbishop Mark Coleridge thinks some of his fellow prelates are afraid of confronting reality.

As the head of the Archdiocese of Brisbane on the east coast of Australia, the archbishop was a delegate to the synod of bishops in Rome in 2015. There, he said, he witnessed healthy disagreement about issues important to families during the two-week meeting—prompted by Pope Francis’ call for open and honest dialogue. That debate has continued more than a year after the synod came to a close, with some bishops calling for greater clarity from the pope.

But Archbishop Coleridge told America that uncertainty is simply part of modern life.

“At times at the synod I heard voices that sounded very clear and certain but only because they never grappled with the real question or never dealt with the real facts,” he said in a recent interview. “So there’s a false clarity that comes because you don’t address reality, and there’s a false certainty that can come for the same reason.”

The archbishop, who worked in the Vatican’s secretary of state’s office in the late 1990s, was responding to a question about critics of Pope Francis who have taken issue with his apostolic letter, “Amoris Laetitia,” in which the pope calls for a pathway to Communion for divorced and remarried Catholics.

Critics of the pope have stepped up their attacks on the document in recent months, emboldened by a letter sent to the pope by four cardinals in September asking for yes or no answers to five questions about the document. They say the pope is sowing confusion in the church on questions settled by previous popes, including St. John Paul II.

But the pope’s supporters, including Archbishop Coleridge, say Francis is simply asking the church to confront challenging questions.

During the 2015 synod, Archbishop Coleridge blogged about his experience as a synod delegate, offering Catholics a window into a process that, aside from occasional interviews with participants, was conducted in private.

He is a proponent of church leaders using social media, and he tweets on an eclectic range of topics from @ArchbishopMark. In recent weeks, he’s tweeted his thoughts on the unification of Italy, his desire for a heavenly dinner with Leonard Cohen and Fidel Castro and the mental fortitude of Australian professional athletes.

Archbishop Coleridge said he agrees with a fellow Aussie, Cardinal George Pell, who said in London recently that some Catholics are “unnerved” by the debate about “Amoris Laetitia.”

“I think that’s probably the right word, and I sensed in the words of the four cardinals men who were unnerved,” Archbishop Coleridge said. “Clearly, they had been spoken to by a lot of people who were unnerved. I can understand that.”

But where Cardinal Pell went on to suggest the pope needed to offer clarity on the issue, Archbishop Coleridge said Francis is simply acting like a pastor.

The pope, he said, is “bringing out into the very public setting of the papacy what any pastor does in his parish or diocese.”

He noted that pastors are “very often dealing in a world of grays and you have to accompany people, listen to them before you speak to them, give them time and give them space, and then speak your word perhaps.”

Ultimately, individual believers have to discern where God is at work in their own lives—a process that doesn’t always lend itself to simple yes or no answers.

“Some people expect from the pope clarity and certainty on every question and every issue, but a pastor can’t provide that necessarily,” he said.

He said Francis is moving the church from a static way of doing business to one that is kinetic, something those used to a different kind of papacy are finding difficult.

As for how Pope Francis is handling the criticism, Archbishop Coleridge said not to worry.

“I can’t imagine that Pope Francis is deeply anguished over some of the opposition that he faces,” he said. “He’s a man who doesn’t seem rattled by that sort of thing.”

"Ultimately, individual believers have to discern where God is at work in their own lives—a process that doesn’t always lend itself to simple yes or no answers."

DUHHHHHHHHHHHHHHHH ! The church of Thomas Aquinas and St. Augustine has forgotten this?
Joseph Manta
4 years 5 months ago
This article sounds like the moral relativism condemned by Pope Benedict.
Jim McCrea
4 years 5 months ago
Bishops break out in shingles in the face of ambiguity; laity live with it each day in their homes, jobs and social life. Chancery offices constantly view the faithful as so befuddled that, without unctuous instruction, they would confuse the holy water fountain with a birdbath. (from the book “Tim Unsworth”, a collection of his articles in NCR between 1982 and 2007, published by Acta Publications in 2008)