A new standard for teachers: Are they respectful, tolerant and open to diversity? 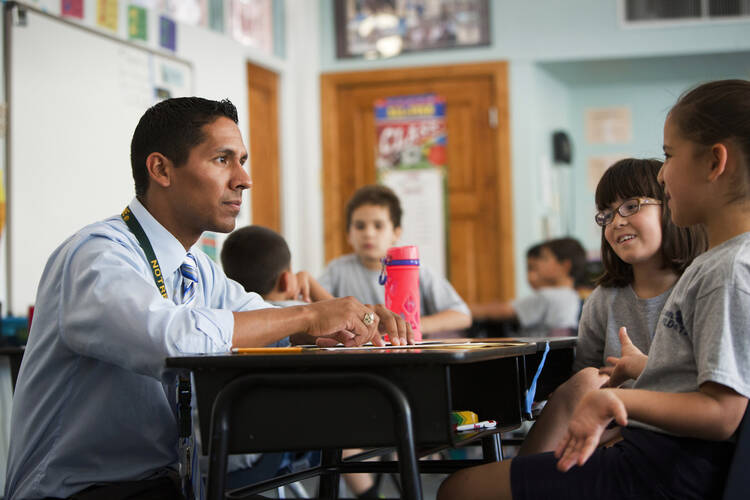 During my annual retreat I was praying a meditation on gratitude. I suddenly thought of Sister Thaddeus, the nun who had taught me in fourth grade at our parochial school in suburban Philadelphia in the early 1960s.

Three images returned. My friend Vince had the worst handwriting in the class. Rather than upbraiding him, as other teachers had done, Sister Thaddeus would cheerfully tutor him during recess. “It’s getting better, you know. Keep up the good fight.” This was no minor issue. In the preconciliar Catholic grammar school, penmanship enjoyed quasi-sacramental status.

The poorest pupil in class was Charlotte. The school’s class structure was simple: the split-levelers, the row-housers and the people from “the project,” where Charlotte lived. She also stuttered badly. In Sister Thaddeus’s class, one of the girls would call out a pupil’s name from a stack of cards as we plowed through the daily oral drills. After several weeks, however, I noticed that Charlotte was the one pupil whose name was never called. Only years later did I surmise that Sister Thaddeus had pulled her card to avoid any humiliation.

Our parish was an endless round of social celebrations: the May procession, the carnival, the St. Patrick’s dance, the St. Joseph table, bingo, the concert by the Mummers string band. Sister Thaddeus would circulate among the families with a warm greeting for each person. When our family showed up at the festivals, we often brought our sister Nancy, who had Down syndrome. Sister Thaddeus would always go out of her way to give a small gift to Nancy. We quickly acquired “the Sister Thaddeus collection”: a St. Bernadette medal, holy cards of Our Lady, a plastic rosary bracelet.

After decades of teaching, it dawned on me that Sister Thaddeus had long ago made her own preferential option for the poor. Whereas many teachers play for the stars, Sister Thaddeus cared for the vulnerable. Her pedagogical compass was compassion. The Gospel made her tick.

Several months ago I read in the University of Pennsylvania alumni magazine that Dr. Malcolm Laws, a professor emeritus of English, had died. I had taken a course from him on Victorian literature in the spring of 1970. He was an old-fashioned teacher, more prone to savor than dissect a text. I soon discovered there was more than Old World charm at work.

In May of 1970 the United States military forces invaded Cambodia. Campuses nationwide exploded. Student antiwar activists demanded a moratorium on the imminent examination week. Most faculty canceled the exams or offered an alternative, such as a brief paper. But no cancellation notice from Dr. Laws appeared. His exam was on.

I still remember the eerie silence as we trudged into Bennet Hall, with its marble staircases and frosted glass in the doors. We were the only people in the building that morning. The classroom itself was silent. Some of us were angry with Dr. Laws for refusing to cancel the exam. Others of us, exhausted from an all-nighter, were simply trying to remember who Swinburne was. In the middle of the exam, a class member burst into the room. With a quaking voice, she denounced Dr. Laws and the rest of us for not caring about who was killed in Southeast Asia. Dr. Laws rose and quietly told her that he would meet with her in the corridor. He turned to us and said, “Remember, class, you are on your honor.”

I have often thought of that morning with Dr. Laws. Courage can erupt in the most unexpected corners. Against hysterical political pressure, he had reminded us of our duties as teacher and student in the study of humane letters. Against the faculty consensus, he firmly stood alone. Ultimately, his course was about something more than Tennyson and Browning.

Teaching formation and evaluation these days often focuses on technical skills. How well does the teacher use PowerPoint, prepare for class, design exams? Questions on a teacher’s moral character are oddly cramped. Is the teacher respectful, tolerant, open to diversity?

Compassion and courage count for little. But we know those virtues when we see them. Even in the age of email with attached files, education is still about one soul shaping the struggling souls of others.

Sister Thaddeus and Dr. Laws got it.

Show Comments (
2
)
Comments are automatically closed two weeks after an article's initial publication. See our comments policy for more.
Henry George
5 years 8 months ago
Thank You Fr. Conley, S.J., Few things are more valuable than a dedicated teacher.
Lisa Weber
5 years 8 months ago
Thank you for reminding us of valor and honor in the teaching profession. I think we will need more of it everywhere these days.