Over 2,000 young Catholic leaders met over the weekend to advance social justice causes.

Over 2,000 young Catholic leaders met over the weekend to advance social justice causes. 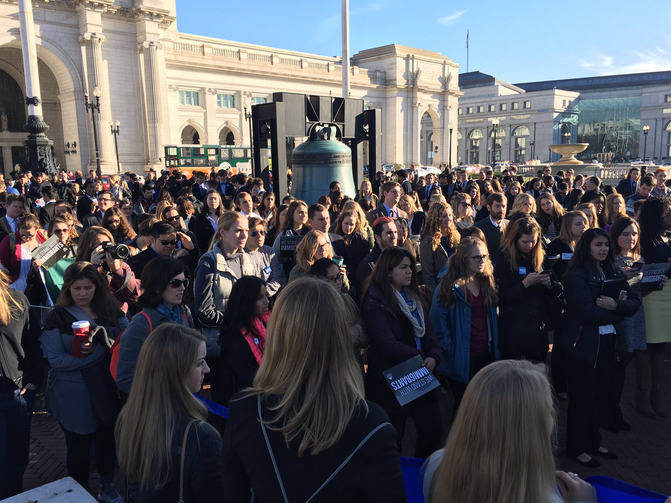 “All of us, every human on earth, is a representative figure of God,” Lisa Sharon Harper said to a ballroom full of young social justice advocates. “Not on our watch will the image of God be so fervently crushed. Not on our watch.”

Our shared humanity was a theme running throughout the three keynote speeches at the 19th annual Ignatian Family Teach-In for Justice in Washington, D.C. Over 2,000 people gathered at the event hosted by the Ignatian Solidarity Network to learn about social justice issues, share their stories and advocate for marginalized groups from a Catholic perspective.

In recognition of the final days of Pope Francis’ Year of Mercy, this year’s Teach-In theme was “Mercy in Action.”

“I’ve been really amazed by the way people have embraced mercy this year,” Christopher Kerr, executive director of the Ignatian Solidarity Network, said. “The theme fits really well with our advocacy focuses.”

The three-day event, comprising two days of lectures and reflection and one day of advocacy, was primarily attended by young people ages 16 to 24 from Jesuit schools all over the continent. This year, over 120 Catholic institutions from 27 states, Canada, El Salvador and Mexico were represented. Attendees were religious, students, volunteers and social justice advocates.

“I look across the crowded room and I see high schoolers all the way up to people who have graduated and are working in different social justice fields,” said Kari Nelson, a Jesuit Volunteer at the Southern Center for Human Rights. “I think, especially, in this past year, it’s important to know that we’re not alone in doing the work that we’re doing.”

In between keynote speeches, participants were able to attend breakout sessions on everything from the Dakota Access Pipeline to applying to graduate school for a social justice related degree.

“It’s really great to have more concrete tools,” Hannah Wingett, a justice and peace studies major at Georgetown University, reflected. “In my experience, there’s a lot of desire to help and no real way to actually make that happen.”

Saturday featured several well-known Catholic speakers, including the bestselling author of Tattoos on the Heart Greg Boyle, S.J. Father Boyle is the executive director of Homeboy Industries, a rehabilitation program for gang-involved youth. He addressed man’s tendency to demonize people, expressing the importance of standing with the ostracized to counteract that human inclination with tenderness.

The events continued on Sunday with a keynote speech from Norma Pimentel, M.J., a nationally recognized advocate for immigrants and the executive director of Catholic Charities of the Rio Grande Valley. Sister Norma explained a simple ethic behind her broad ministry: “The way I see it, they are part of the human race, of who I am.”

The Teach-In’s speaking events closed with a rallying address by Lisa Sharon Harper of Sojourners, a Christian non-profit that advocates for social justice, peace and the environment.  “Are you willing to stand?” Harper challenged the audience. “Are you ready to go to the halls of Congress, to tell Republicans and Democrats:‘Not on our watch’?”

At an event filled with passionate devotees to justice and Catholic social teaching, the recent presidential election was bound to be a topic of discussion, especially considering President-elect Donald J. Trump’s stance on immigration policy, among other issues.

“It’s necessary for this group of people to be vigilant…and to take seriously what Jesus took seriously—the widow, orphan and stranger—otherwise we’ll lose our way in partisan silliness,” said Father Boyle. These sentiments were echoed by speakers and attendees alike throughout the weekend.

“Especially this week, it’s more relevant than ever to make sure we’re keeping mercy at the front, keeping people on the margins first, and make sure the needs of the marginalized are met,” explained Andrew Lynch, attending his fourth Teach-In this year. “This is a space for healing, and then Monday is a day to move forward.”

The organizers handled discussion about the election with grace. “We weren’t sure what the vibe of the weekend was going to be,” Dylan Lang, one of two emcees at the Teach-In, said. “I hope that people can walk away with these faces with these stories and just be there for each other.”

The Teach-In ended on Capitol Hill with over 1,400 people participating in a day of advocacy for humane immigration policies and criminal justice reform grounded in dignity.

“The issues that we’re talking about here, and the issues that we’re going to be talking about in the aftermath [of this election] are about people,” said Mr. Kerr. “Our work, and the work of the church, has always been grounded in the gospels and in the way that Christ calls us to respond to the needs of our brothers and sisters. And that doesn’t change, whoever is president.”

Teresa Donnellan is an O'Hare Fellow at America Media.