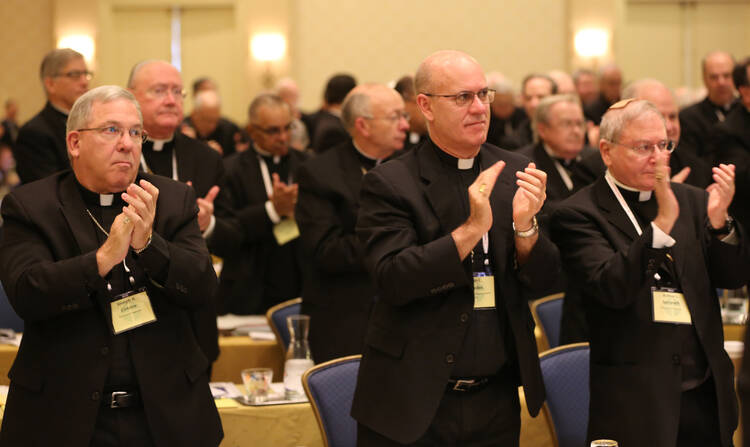 Bishops applaud after Archbishop Joseph E. Kurtz of Louisville, Ky., president of the U.S. Conference of Catholic Bishops, gives his final speech as president during the annual fall general assembly of the bishops Nov. 14 in Baltimore (CNS photo/Bob Roller).

Spotlight on the Environment

Before the vote, however, Cardinal-designate Joseph Tobin, who will soon become archbishop of Newark, took to floor to ask if “the magisterial teaching of Pope Francis on the care for creation” was prominent enough in the plan.

Cardinal-designate Tobin said the pope’s teaching “is more urgent than ever given the possibility that the administration isn’t going to be very interested in the questions that Pope Francis is interested in,” including “the clear link [the pope] demonstrates between human misery and the environmental degradation.”

Pope Francis released an encyclical last year that made a Catholic case for protecting the environment.

Archbishop Gregory Aymond told the bishops that the pope’s teaching on the environment is present in the document in a section about protecting human life.

Bishops Look to the Southwest for New Leaders

9:41 A.M. Cardinal Daniel DiNardo of the Archdiocese of Galveston-Houston was elected president of the U.S. Conference of Catholic Bishops and Archbishop Jose Gomez of Los Angeles was elected vice president during the fall general assembly on Tuesday morning in Baltimore.

Currently serving as vice president, a post that traditionally leads to the presidency, Cardinal DiNardo was also a delegate to the first part of the synod of bishops on family life in Rome.
Archbishop Gomez, born in Mexico and ordained a priest of Opus Dei, is an outspoken advocate for immigration reform in the United States. In the days following the U.S. presidential election, Archbishop Gomez hosted a prayer service in L.A. to pray for unity.

“We need to be people of peace, people of compassion,” he said “Love, not hate. Mercy, not revenge. These are the tools to rebuild our nation and renew the American dream.”

Archbishop Wilton Gregory on Racism in the United States

3:55 P.M. Archbishop Wilton Gregory of Atlanta told American bishops that as a body they must move more quickly to address racism in the United States, “particularly in the context of post-election uncertainty and disaffection.”

The archbishop, who chaired a special task force created to address an outburst of violence throughout the country, including various police shootings of unarmed black men as well as lethal attacks on police officers, said that a planned pastoral letter on racism should be “expedited” and that in the meantime, “a shorter term statement on these issues, particularly in the context of post-election uncertainty and disaffection,” should be drafted.

He also said that the bishops’ social justice charity, the Catholic Campaign for Human Development, “should be tasked with identifying and funding new and innovative approaches that promote community development and peace.”

“The church is uniquely situated to bring people together in honest dialogue to foster healing,” Archbishop Gregory said. “As bishops we must recognize the significance of this moment and work with the faithful and affected communities for lasting peace.”

Carolyn Woo on CRS and Its Detractors

2:20 P.M. Carolyn Woo, the head of the US bishops international charitable agency, Catholic Relief Services, said “evil is no longer abstract to me,” speaking to the human suffering C.R.S. workers seek to alleviate. She then tearfully lamented the division within the church that makes meeting that need more difficult.

In a speech earlier Monday, she said “the most chilling” statements she heard during her tenure were warnings against compromise, presented in the language of winning and losing, rather than being focused on carrying out the church’s mission.

“I walked away and thought, wow, when can we collaborate,” she said. She said she has been saddened that “we cannot come together because of our differences."

Following Dr. Woo’s talk, Archbishop Paul S. Coakley of Oklahoma City, chairman of C.R.S., took to the podium to urge bishops to continue supporting the organization. He condemned attacks from the Lepanto Institute, a watchdog group that has hounded the organization for partnering with groups that accept the use of contraception.

The bishops responded with a standing ovation.

Dr. Woo will retire from her post leading C.R.S. at the end of the year following a five year term.

12:15 P.M. In his final address to U.S. bishops as president of the conference, Archbishop Joseph E. Kurtz spoke passionately about defending life and religious liberty, some of the defining issues of his three-year tenure.

“It is our duty to protect those who wish simply to live their faith and to serve God and one another with integrity of faith,” he said.

He recalled visiting members of the Little Sisters of the Poor, an order of Catholic sisters who work in healthcare that sued the Obama administration over the contraception mandate in the Affordable Care Act.

“The prominence of the Little Sisters of the Poor on a national level has reminded me of the precious gift of religious freedom,” Archbishop Kurtz said. “This freedom is at the very core of the practice of our faith and at the very foundation of the greatness of our nation. The lesson learned: don't allow government to define what integrity of faith means.”

The archbishop also talked about his experience on the U.S.-Mexico border in February, where Pope Francis celebrated an open air Mass and prayed for those who died trying to make their way from Mexico into the United States. He said his experience meeting with unaccompanied minors helped make the contentious migration issue more concrete for him.

“Our nation is on thin ice when refugee families are spoken of in the abstract,” he said.

He also talked about meeting a young boy with Down syndrome in Ukraine last year, which reminded him of the need for bishops to stand up for human life and dignity.

“There's an astronomically high rate of Down’s children in the womb who never are given a chance to live,” he said. “So many youths in our nation need a chance—an opportunity.”

He also addressed what he dubbed “an unprecedented lack of civility and even rancor in the national elections just completed.”

But he noted that the U.S. Conference of Catholic Bishops has worked for 99 years to promote the common good and said it will continue to “embrace that task with enthusiasm and enter respectful dialogue with President Donald Trump and with both houses of Congress.”

The Conference will elect new leaders on Tuesday morning.

10:50 A.M. The pope’s ambassador the United States, Archbishop Christoph Pierre, echoed Archbishop’s Kurtz’ assertion that the nation is divided, suggesting to the bishops that “mercy is what this country needs to heal the wounds of division.”

But he looked to the future, offering a nearly 30-minute talk about the challenge Catholics face in keeping the church relevant to young people, a topic bishops from around the world will consider when they meet in Rome in 2018.
“They matter, he said of young Catholics, including those who have fallen away from the church. “They are part of the family."
The church needs “new language, new methods, [and a] new missionary heart so each young person can experience the mercy of God,” he said.
Young people “are not allergic” to the faith, he continued, but many of them lack an understanding of how to practice or understand it.
Young people want to be heard and they desire community, he said, and the church must go to them and walk alongside them.

10:28 A.M. Catholic bishops in the United States kicked off their general assembly in Baltimore on Monday morning and the president of the group wasted no time before weighing in on the contentious presidential election.

Archbishop Joseph E. Kurtz of Louisville said he has written to President-elect Donald J. Trump, pledging to work with him on pro-life and human dignity issues.

But he also acknowledged the fear that some Americans are feeling because of Mr. Trump’s promise to deport millions of undocumented people living in the United States and he said that as pastors, bishops must support them.

“Let us repeat to our sisters and brothers who have come to America fleeing persecution and working hard to build a better life for their families: We are with you,” he said to the full body of bishops. His statement was met with applause.

He urged bishops to take to heart a statement released on Nov. 11 from Bishop Eusebio Elizondo of Seattle, who is chairman of the U.S. Conference of Catholic Bishops committee on migration, in which he said Catholic bishops will continue “to promote humane policies that protect refugee and immigrants' inherent dignity, keep families together, and honor and respect the laws of this nation.”

The statement was read to the plenary session.

Michael J. O’Loughlin
@MikeOLoughlin
Show Comments (
2
)
Comments are automatically closed two weeks after an article's initial publication. See our comments policy for more.
ed gleason
5 years 10 months ago
Talk about the undocumented is nice and just nice talk. .. The right Action/Praxis/USCCB Resolution would be to call for parishes with their banners to promise to stand in front of buses that will be used to round up the undocumented. And the bishop will be there too.. Too radical... then please shut up. "they are in my prayers' is not the Christian response.
William Rydberg
5 years 10 months ago
Rejoice, The Thermonuclear threat level is reduced this day! Though I think the value would have also decreased dramatically if Mr Senator Bernie Sanders of Vermont would have won the American Presidency. Rejoice dear Prelates of the World, This ought to be mentioned in their Daily Despatches: http://www.express.co.uk/news/world/732135/donald-trump-election-defcon-reduced-level-5-safest-level Peace NOT the War Party! in Christ, The King...