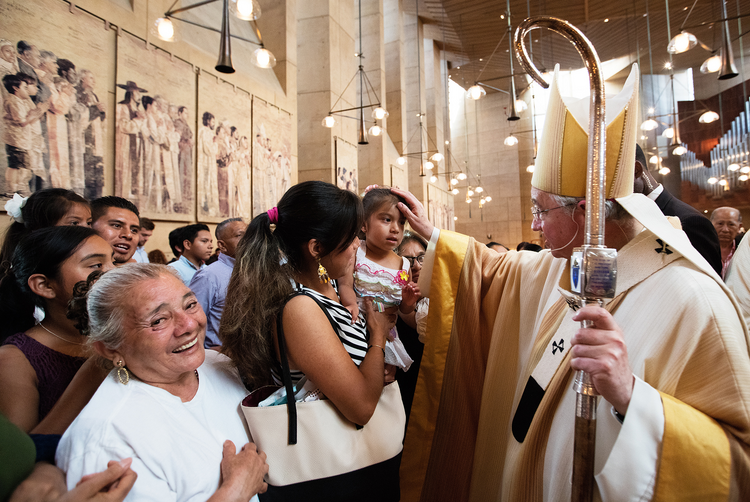 Two days after one of the most divisive presidential elections in recent memory, the archbishop of Los Angeles used an interfaith prayer service to call for unity and respect for the undocumented in a passionate speech delivered in English and Spanish, one that may also serve as an argument for other bishops to break precedent and elect him head of the U.S. Conference of Catholic Bishops during its fall meeting next week in Baltimore.

“In our country, we need to start building bridges and bringing people together. We need to reach out to those who are hurting,” Archbishop José Gomez said on Nov. 10 at the Cathedral of Our Lady of the Angels in downtown L.A. “Now is the time to build unity and heal communities, through our love for our neighbor and our care for those in need.”

Noting that more than 2.5 million people have been deported in recent years and worrying that “nobody seems to care,” Archbishop Gomez said, “we are better people than this.”

“We need to be people of peace, people of compassion,” he continued. “Love, not hate. Mercy, not revenge. These are the tools to rebuild our nation and renew the American dream.”

Offering prayers for Donald J. Trump, the president-elect who has promised to build a wall along the U.S.-Mexico border and to deport the roughly 11 million undocumented immigrants living in the country, the archbishop urged lawmakers “to come together, in a spirit of national unity, and agree to stop the threat of deportations—until we can fix our broken immigration system.”

Archbishop Gomez is one of 10 nominees to take over the presidency of the conference next week from Archbishop Joseph Kurtz of Louisville, who wraps up his three-year term at the conclusion of the meeting.

Tradition holds that the sitting vice-president is elected president, which would mean Cardinal Daniel DiNardo of Galveston-Houston would be elected. But this custom was broken in 2010, when New York’s Cardinal Timothy Dolan was elected president over Bishop Gerald Kicanas of Tucson, who had been the sitting vice president. The following election, in 2013, returned to normal, when Archbishop Kurtz was bumped up from second in command to the top spot.

Cardinal DiNardo is still the most likely candidate to win the election, but he was one of 13 cardinals who signed a letter sent to Pope Francis last October challenging the Synod of Bishops, a meeting the pope called to discuss family life. The letter was viewed as a challenge to the pope, though the signers said they were taking Francis up on his invitation to dialogue candidly with him.

In addition to Cardinal DiNardo and Archbishop Gomez, eight other bishops have been nominated for president and vice-president.

They include Archbishop Charles Chaput of Philadelphia, who hosted Pope Francis during his U.S. visit last year but who was not picked to be a cardinal, and Archbishop John C. Wester of Santa Fe, who has been a strong immigration advocate and who in recent weeks urged Catholics to consider a range of social justice issues before voting.

But selecting Archbishop Gomez, who leads the largest archdiocese in the nation, for the top spot would check off many boxes for the conference, which has struggled to respond nimbly to changes in both the church and in society.

Born in Mexico, the archbishop is fluent in Spanish and representative of the church’s fastest growing demographic. He was ordained a priest of Opus Dei and is viewed as a traditionalist, like much of the U.S. hierarchy, yet he is one of the church’s leading voices calling for immigration reform. He has the respect of his fellow bishops, having been elected by the conference to serve as a U.S. delegate at the synod of bishops last fall.

Perhaps most important, Archbishop Gomez is from the Southwest, where Catholicism is growing. Critics contend that Rome continues to see the church in America through an older lens, concentrated in the Northeast and midwest. They point to the pope’s decision to bestow red hats later this month to two of his top American allies, Archbishop Blase Cupich of Chicago and Archbishop Joseph Tobin of Indianapolis, who will soon take over in the archdiocese of Newark.

The pope’s selection of Archbishops Cupich and Tobin, along with Bishop Kevin Farrell, who was moved from Dallas to head a new Vatican department on family life, as new cardinals signals a shift within the U.S. church as the pope’s appointees take on a greater leadership role.

In his speech, Archbishop Gomez sought to address the widening political gap in American society.

“We are not liberals or conservatives,” he said. “Before everything else, we are children of God.”

In addition to picking a new president and vice-president during the meeting, which runs Nov. 14-15, bishops will hear recommendations on promoting peace and vote on adopting a three-year strategic plan.

At last year’s meeting in Baltimore, the bishops voted to press on with five key priorities: evangelization, family and marriage, human life and dignity, vocations, and religious freedom.

Some bishops voiced concern that issues such as poverty, immigration and the church’s opposition to the death penalty did not rise to the level of priorities.

On the first day of the meeting, bishops will celebrate Mass together at St. Peter Claver Church, home to the largest African-American Catholic congregation in Baltimore.

Public portions of the meeting will be livestreamed on the U.S.C.C.B. website and discussions will be live-tweeted with the hashtag #USCCB16.

Show Comments (
2
)
Comments are automatically closed two weeks after an article's initial publication. See our comments policy for more.
Vincent Gaglione
4 years 2 months ago
I longed to hear Archbishop Gomez' remarks from all the nation's bishops BEFORE the election . The USA Catholic Church has been deafeningly silent from my point of view on the immigration issue, even as Obama has deported millions. And don't cover the silence up with the excuse of USCCB policy papers. Nobody reads them; nobody hears them proclaimed in parish pulpits. Nor has there been any condemnation of Catholic politicians who seemingly gleefully supported and still support the wall, the disruption and break-up of families, and the deportation of even more millions as campaign rhetoric and policy, as well as the reference to Pope Francis' remarks as "disgraceful!" Archbishop Gomez' comments are too little, too late. The foxes are in the chicken house!
John Campbell
4 years 2 months ago
Yes, well Gomez is no Chaput, but before the election he was one of those yapping a lot about the hierarchs' image of "pro-life" while silent on the corrosive, creeping fascism we are witnessing. Catholics could not have voted faithfully for Trump, but a majority did, and the USCCB remains unreformable. I plan to keep praying, and I may even continue contributing financially, but I am also landing much stroger support for Future Church and others like Guttierez.
More: Vatican / Pope Francis / Immigration