What Canadian religious history can teach us about U.S. church attendance 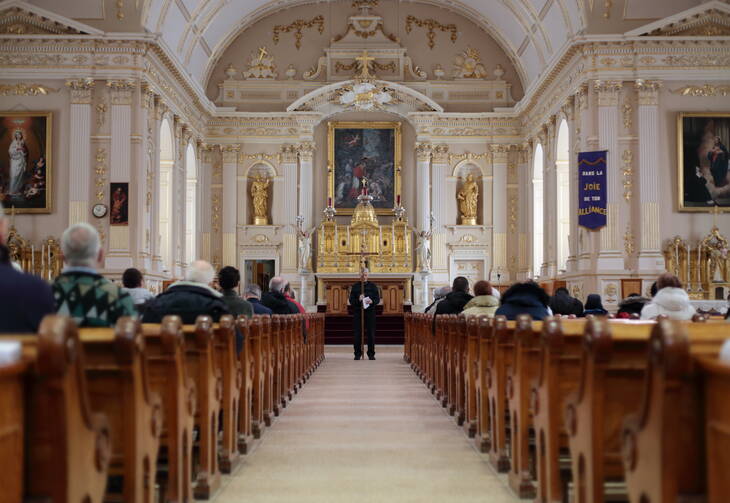 Pilgrims to the Oratory of Saint Joseph on Mount Royal, the highest point in Montreal, must ascend 283 steep steps to reach the church. I spent most of the climb on our visit last month trying to distract my wife from just how out of breath I was, and got lucky when she stopped to read the French sign on the 99 wooden steps located between the two sets of concrete stairs: Réservé aux pèlerins qui montent à genoux: “Reserved for pilgrims climbing on their knees.”

It was a reminder that Quebec Catholicism is (or was) of a different flavor than ours; most of us don’t even genuflect in church anymore. I have encountered a similar shrine in the United States once: a replica of the Lourdes grotto in Lowell, Mass., made famous by Jack Kerouac’s description of it as a medieval horror. But Kerouac’s own parents were from Quebec, and the Catholics who built the shrine were Québécois, French-Canadian in language and culture.

On display inside the oratory was the heart of St. André Bessette, C.S.C., the miracle healer of Montreal and the inspiration for the basilica (he credited St. Joseph for the thousands of miracles attributed to him)—but not in an alabaster jar, or in a discreet urn atop a distant altar. No. His heart, preserved in formalin, was floating right there in front of us in a glass reliquary, looking for all the world as if it had a beat or two still left in it. This was a Catholicism from another age, I thought, one more fervent, devotional and sacramental than our own.

But André Bessette died in 1937. And the Oratory of Saint Joseph was finished in 1966, hardly another age at all; I’d bet it’s newer than your parish church.

Once grouped with the Irish and the Polish as a signally devout Catholic population, the citizens of Quebec are now quite the opposite. Weekly church attendance, supposedly an astounding 90 percent in 1960, was pegged in a recent article in The Economist at 2 to 4 percent, the lowest of any Western country. And it is worth noting that on our visit to St. Joseph, the steps for pilgrims to climb on their knees were empty, and the only person venerating St. André’s heart was a Haitian woman praying aloud in Creole. And Montreal’s astonishing Notre-Dame Basilica charges visitors an entry fee, a tacit confession that it is more a museum than a place of worship.

It’s easy to blame the Second Vatican Council, which some do. It’s also easy to blame baby boomers for ruining everything, which they did. But the facts in Quebec hint at something else. A study in 2009 claimed that only 9 percent of high schoolers in the province identified as Catholic, suggesting that guitar masses and boomer narcissism are not the only obstacles to renewal.

The most alarming explanation is the one that many Québécois will tell you themselves. Frankly, they were tired of the church: sick of it running every aspect of their lives and weary of the collusion with politicians that allowed the church to remain forever unaccountable. When the time came, during the turbulent days of the 1960s (remember that for Quebec, the cultural touchstone may have been less Woodstock or Vietnam than the Paris riots of 1968, which André Malraux, the French minister of cultural affairs, associated with the “death of God”) to renew their allegiance to a suddenly unsure institution or walk away, they gave a Gallic shrug and left. The same seems to be happening in Ireland today, where sexual abuse is the last straw for another population weary of the all-encompassing reach of the church.

Will it happen here? Is it happening here? Ironically, the church’s weakness in the United States may prove its strength. Prevented by the culture and the state from exerting too much control, it probably has never achieved enough power to inspire that kind of backlash. And, thanks to Pope Francis (may he live forever), the American episcopacy is undergoing a renewal that includes bishops who seem to understand the wounds left by the scandals of sexual abuse and corruption.

Even so, Quebec’s religious history should still provide a powerful memento mori to the American church. There is a point when the people in the pews turn their gaze from the altar to the exit.

James T. Keane is an editor at Orbis Books in Ossining, N.Y., and a former associate editor of America.