Are Vietnam and the Vatican close to establishing diplomatic relations? 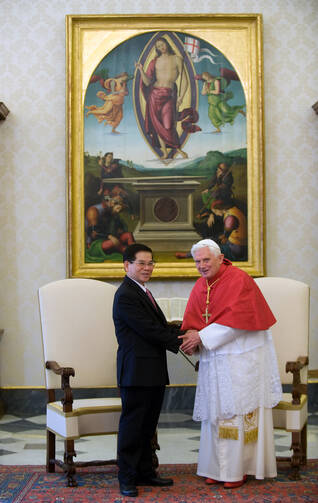 Are Vietnam and the Holy See close to establishing diplomatic relations? This question is being asked after a joint working group established in 2009, whose goal is the establishment of such relations, met for the sixth time on Oct. 24 through Oct. 26 in the Vatican. It will meet again in Hanoi next year.

The meeting attracted little attention because the media is focused on a possible Sino-Vatican breakthrough agreement regarding the appointment of bishops and related matters, including whether Pope Francis will pardon China’s eight illegitimate bishops and Beijing will recognize some 30 underground church bishops.

Diplomatic relations are not on the agenda of the secretive talks with China, whereas Vietnam and the Holy See set up their working group with the aim of reaching that goal.

Relations between the Holy See and Vietnam are moving ahead in a positive way, notwithstanding some tensions in church-state relations at the local level in this land of 91 million people, six million of whom are Catholic. The church enjoys religious freedom, though sometimes problems surface regarding questions of justice, including requests for the return of confiscated church properties.

In the October press communique, the joint working group “acknowledged the progress,” citing “regular contacts and consultations, the exchange of high level delegations” and “frequent pastoral visits” to Vietnam by the nonresident papal envoy. These are only part of a broader positive relationship that is worth recalling.

When the Communists won control of Vietnam on April 30, 1975, they broke diplomatic relations with the Holy See, but they never persecuted the Catholic Church as China did. They always allowed a degree of religious liberty, which has increased notably in recent decades with high-level visits from Vietnam to the Vatican and vice versa, beginning in 1990 when the Vatican’s Cardinal Roger Etchegaray visited Vietnam.

Subsequently, both sides reached an important agreement regarding the appointment of bishops that has worked well. Vietnam’s bishops can travel freely to the Vatican, and the Holy See can send top officials to Vietnam without problems

A significant breakthrough came in January 2007, when Prime Minister Nguyen Tan Dung of Vietnam visited Pope Benedict XVI. He was the first Vietnamese leader to come to Rome since 1975. That led to the setting up of the joint working group. In December 2009, Vietnam’s president, Nguyen Minh Triet, also visited the pope; and in June 2010, the working group agreed that “in order to deepen relations between the Holy See and Vietnam” and “between the Holy See and the local Catholic church” as “a first step, a non-resident representative of the Holy See for Vietnam will be appointed by the Pope.” Afterward, Msgr. Ettore Balestrero, head of the Holy See’s delegation, told me: “It is a first step on the road to diplomatic relations, others will follow. It is a historic step.”

Since then many positive things have happened, three especially noteworthy: The papal envoy has visited all 27 dioceses, the Federation of Asian Bishops Conference held its plenary assembly in Vietnam in December 2012, and the country’s first Catholic university opened in September 2016.

The Holy See would like this relationship developed through full diplomatic relations and, in the October communique of the working group, it “reaffirmed that Pope Francis has a keen interest in the development of Viet Nam–Holy See relations.”

Why, then, has Vietnam hesitated? Authoritative sources suggest three main reasons. First, there are “local irritants” that do not help. Some Catholic communities press local authorities to return confiscated church properties or challenge them on questions relating to justice, freedom of speech and other issues, provoking negative responses. Second, there is the question whether it is convenient for Vietnam to establish relations now. Linked to this is, perhaps, the decisive reason: China. Vietnam has considered China its big brother and may fear that if it were to move first in establishing diplomatic relations with the Holy See, this could upset Beijing and those on the central committee of Vietnam’s Communist Party who are close to the Chinese. Consequently, diplomatic relations between Vietnam and the Holy See are not imminent.