Did you know the Jesuits were founded in a dorm room? Here’s what that says about the election.

Did you know the Jesuits were founded in a dorm room? Here’s what that says about the election. 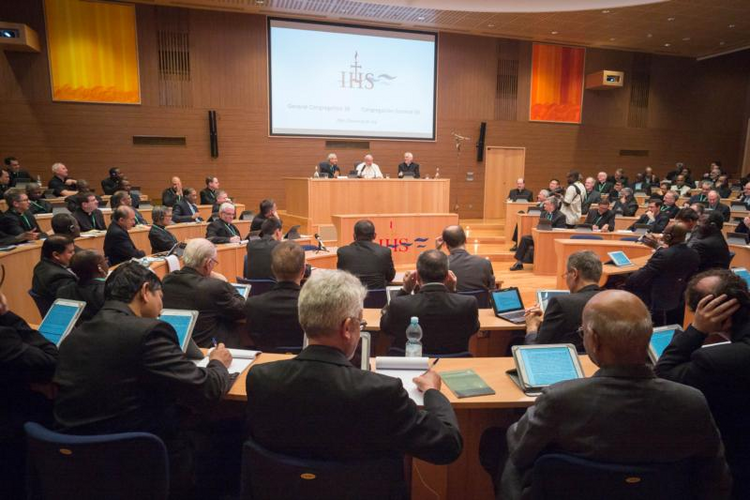 Pope Francis speaks at the Jesuits' 36th general congregation in Rome Oct. 24. Pope Francis, a Jesuit, met his Jesuit brothers after the election of a new superior but did not participate in the election. The pope is seated next to Father Orlando Torres, secretary of the general congregation, and at right Father Arturo Sosa Abascal, the new superior general of the Jesuits. (CNS photo/Don Doll, S.J.)

It might interest you to know that the Society of Jesus really began in a college dorm room. It was September 1529 at the University of Paris. Francis Xavier, a Spaniard, and Peter Faber, a Savoyard, were expecting a new roommate. His name was Ignatius de Loyola, the 37-year-old son of minor Spanish nobility. As Ignacio Echániz, a Spanish Jesuit, has observed, Xavier and Faber “had surely heard about this interesting character. It was widely known that he was from the nobility of Guipúzcoa, that he had a conversion experience and that he had run afoul of the Spanish Inquisition. Above all, everyone spoke of how, after a thirty-day retreat made under him, three Spanish students from the University distributed their goods to the poor, took up residence in the hospice of Saint-Jacques and earned their keep by begging for alms. This caused a big sensation, and friends of the trio rushed to the hospice and forcibly dragged them out. Pedro Ortiz, the Dominican Master at the University, was particularly annoyed by these events.”

Ignatius was cleared of the charges by the Inquisition, but the effects of these bizarre happenings lingered, and both Xavier and Faber were reminded of them every time they saw Ignatius limping to and from class. As they got to know one another, Ignatius would have told his new roommates that he acquired his distinctive gait several years earlier during a series of botched attempts to correct the damage done by a cannonball at the Battle of Pamplona. This would have been an awkward moment for the roomies. Though Ignatius and Xavier were both Basque, their families were allied to opposing camps in the never-ending struggle to determine the destiny of what is now northern Spain. What’s more, Xavier’s brother, as Ignatius surely knew, fought on the opposing side at the Battle of Pamplona. If we can let our historical imaginations take flight for a moment, he may even have been the one who ordered the volley that cannonized, so to speak, the young Captain Ignatius.

It is remarkable, then, that these two men, Francis Xavier and Ignatius de Loyola, separated in age by 10 years, born into warring factions and of markedly different temperaments, would, with the aid of Faber and several other companions, found the Society of Jesus—what one historian has called “the most vibrant, most provocative religious order the Catholic Church has ever produced.” It is all the more remarkable when one considers that the Basques were better known for their worldly adventures than their saintly virtues. “They were especially prized,” according to Mary Purcell, “as soldiers, shepherds, seafarers and administrators, and widely despised as brawlers and ruffians.” Ignatius was no exception. He tells us in his autobiography (referring to himself in the third person) that “up to his thirtieth year he was a man given to worldly vanities, and having a vain and overpowering desire to gain renown, he found special delight in the exercise of arms.”

What is the point of this trip down the Jesuits’ memory lane? Well for one thing, on Nov. 5 we will celebrate, as we do each year, the feast of all the saints and blesseds of the Society of Jesus, an impressive company of men in which Ignatius and Xavier occupy pride of place. It is important to remember that none of these men started life as a saint, but that they grew slowly in holiness only after much struggle, only by the patient grace of God. For folks like me, sinners who are called by God to serve, that is very reassuring. But here’s another reason: Just three days after that feast, we will hold a presidential election. It will be worth remembering that even those who have fought on opposite sides of the fiercest battle can, with the aid of grace, come together and do great things for the common good.

This article also appeared in print, under the headline “Of Many Things,” in the November 7, 2016, issue.