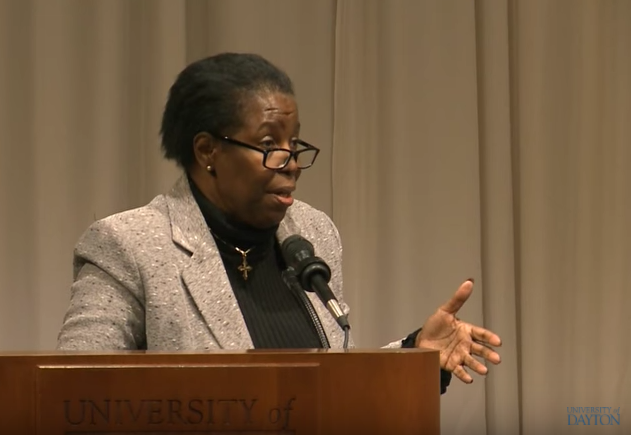 One of the more intriguing questions Pope Francis prompted earlier this year when he announced that a Vatican commission would study whether the early church had women deacons was: How would Catholics react to women preaching?

Some Catholic women hope to find out.

A new website called Catholic Women Preach will publish videos showing just that, Catholic women preaching. The reflections will draw from the church’s weekly readings. The women backing the project say they hope the videos will help Catholics deepen their faith and become more comfortable with the idea of women preaching.

“The kinds of things that women preach about are qualitatively different and touch us in ways that other topics don’t touch us,” Deborah Rose-Milavec, executive director of Future Church and a founder of Catholic Women Preach, told America.

“Even if it’s a bit of a foreign experience to them,” she continued, “once people begin to listen deeply to the wisdom and the words of these Catholic women preaching it also will touch them in brand new ways.”

Church law allows lay people, including women, to preach only in extraordinary circumstances when an ordained minister is not available. Though rare, women have preached in some American churches.

In the Diocese of Rochester, for example, lay people were permitted to preach by the local bishop beginning in 1979, but the practice was ended in 2014.

And even if the women are ordained deacons someday, there is no guarantee that they will be allowed to preach—at least not in the way Catholics are accustomed to today. In comments earlier this year, the pope suggested that priests, acting in persona Christi during the Mass, should give the homily. But there would be “no problem,” he said, with women preaching scriptural reflections in other settings, such as prayer services.

America’s Editors: Why women deacons could enrich the church

One of the backers of the project is FutureChurch, which says on its website that “local Churches should be empowered to call forth women for the ordained diaconia of liturgy, word and charity.”

According to its website, Catholic Women Preach is advised by theologians and church practitioners with backgrounds in various fields, including womanist and feminist theology, global theology and the role of Catholic laity. One of the founders of the project said women of various perspectives are being sought to preach.

“We’ll have the most fabulous, theologically-educated and faith-filled Catholic women from around the world offering five to seven minute reflections on the Catholic lectionary,” Elizabeth Donnelly, another founder of the project and part of a team that meets annually with church officials in Rome to talk about women in the church, told America.

The project launches on Nov. 1, in time for Advent, and the first half-dozen videos include reflections from a mix of Catholic sisters and laywomen.

Kicking off the series is Jamie Phelps, O.P., a retired Catholic theologian who lives in Chicago.

She said she accepted an invitation to be part of the series because she thinks the videos will “make plain the fact that some women are called and gifted as preachers.”

“Since there’s a diversity of perspectives and experiences out there,” she told America, “the more diversity of preachers we have who can tune into the felt needs of the community and of the people, the further along the mission of Jesus Christ is carried.”

Kerry Robinson, the founding executive director of the Leadership Roundtable, will preach about joy on the third Sunday of Advent.

Ms. Rose-Milavec said a reflection from Ms. Robinson at the Vatican last year about “holy anger” helped convince her that the church as a whole will benefit from hearing women preach.

“For instance, in 61 years as a mother, grandmother, woman in the church, I have never heard a priest preach about domestic violence,” she said. “I ran a domestic violence agency for a very long time in a shelter, and this is a topic and an issue that touches every single woman and man in the Catholic Church, because everybody knows somebody who’s been abused.”

Organizers stress that the reflections are meant to be used by Catholics as resources for faith reflections, not as substitutes for the Mass.

“They should serve as a nourishing resource for the larger Catholic community, whether for Bible study, R.C.I.A., homily helps or just for individuals seeking spiritual nourishment,” Ms. Donnelly said.

The goal is to have videos for every Sunday and certain feast days, with transcripts in English and Spanish. Organizers said that women from all over the world will take part.

For instance, Astrid Lobo Gajiwala, a medical doctor from Mumbai who helped Indian bishops draft guidelines for how to better include women in the church, will preach on the second Sunday of Advent. Other reflections will come from women in Asia, Latin America and Africa.

Sister Phelps, who is African-American and who will preach about overcoming class, race and ethnic divisions, said that in an increasingly secular society, the church would benefit from expanding opportunities for women to preach.

“I’m not saying that everybody needs to preach,” she said. “But there are gifts out there that are not being recognized, not being nurtured, not being used to continue the mission of Jesus Christ.”

She is “hopeful” about the pope’s plans to study the possibility of women serving as deacons, a development that could “enable women called to ordained ministry to participate more fully in church ministries.”

“The more laborers we have in the field, the more effective we will be,” she continued. “So why do we relegate women to the sidelines of full ministry in the church?”

Correction: Oct. 28, 2016
The article has been amended to remove the phrase "left leaning" and include a more specific description of the project's supporting members.
More: Women in the Church / Liturgy / Women Religious