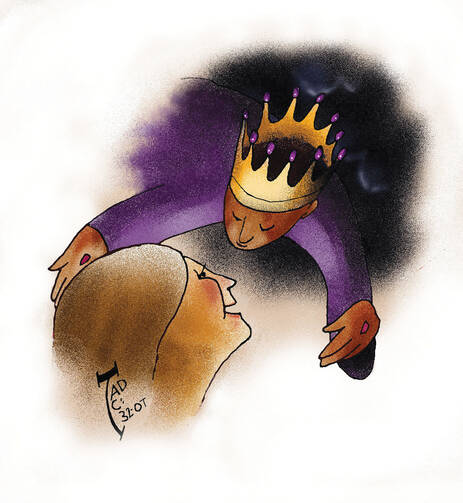 St. Augustine defined martyrdom in this way: “It is the reason why, not the suffering that constitutes the martyr.” The “reason why” is the martyr’s “witness” (Greek martys) to the truth, regardless of the consequences, strengthened and guarded by God to remain faithful. The Christian understanding of martyrdom does not require that one must die, though at various times throughout history, including our own, Christian witness has led to death.

Perhaps the most prominent example of martyrdom from the time before Christ are Hannah and her seven sons, often called the Maccabean martyrs because their story is found in the Second Book of Maccabees. In the story, set in the time of the persecution of the Jews by the Seleucid king Antiochus Epiphanes IV (175-164 B.C.E.), seven brothers, one by one, suffer severe torture and death, as does their mother, because they refuse to eat pork. The stories are gruesome, but each of the martyrs makes a decision to remain faithful to God’s law instead of turning from the truth. It is not that these martyrs desire death; they desire life.

A full life in this world included the freedom to follow God’s law, so the Maccabean martyrs were, the text says, “ready to die rather than transgress the laws of our ancestors.” But they also maintained that life, a good given them by God, would not end with their torturous deaths. When the second brother was being put to death, he said to his persecutor, “You dismiss us from this present life, but the King of the universe will raise us up to an everlasting renewal of life, because we have died for his laws.” The fourth brother, too, near death, said, “One cannot but choose to die at the hands of mortals and to cherish the hope God gives of being raised again by him.” The hope of the resurrection guarded the witness of the brothers and strengthened their faith that God would never forget his people.

This same hope in the resurrection motivated the early Christians to witness to the truth, even when this might lead to persecution or death, since the truth was the resurrection from the dead. Christian faith is grounded in Jesus’ own resurrection and the hope of the resurrection to come. Paul assures the Thessalonians, who as a new church faced almost immediate persecution (1 Thes 1:6, 2:14, 3:3), that in times of distress “our Lord Jesus Christ himself and God our Father” will “comfort your hearts and strengthen them in every good work and word.” Paul repeats the same promise later, stating that as the word of the Lord is spread, “the Lord is faithful; he will strengthen you and guard you from the evil one.”

It is clear that to be strengthened and guarded from the evil one does not mean to escape persecution or even death. Paul, Peter and numerous other early apostles and disciples died as witnesses to the truth. But it did mean that God would strengthen them and guard their witness at times of severe persecution. And at the root of this witness is not a desire to abandon this world, though later Christian martyrdom accounts will certainly flirt with a desire for death, but the ability to remain faithful to God’s word or, in Paul’s stirring words, to direct our hearts “to the love of God and to the steadfastness of Christ.”

It is not necessary to believe in resurrection to remain faithful to the truth and steadfast in one’s beliefs, as Socrates demonstrated, but it does offer most fully the understanding that the goodness of this life is based upon the goodness of God’s eternal being. It is God’s being as the one that was, is and ever will be that allows people to be witnesses, wherever that leads, because God upholds life. Jesus says in his dispute with the Sadducees, the one Jewish group in Jesus’ day that rejected belief in the resurrection, that God is “God not of the dead, but of the living; for to him all of them are alive.” Martyrs are not witnesses to a love of death but to the hope of abundant life.

This article also appeared in print, under the headline “Witnesses to Life,” in the October 31, 2016, issue.