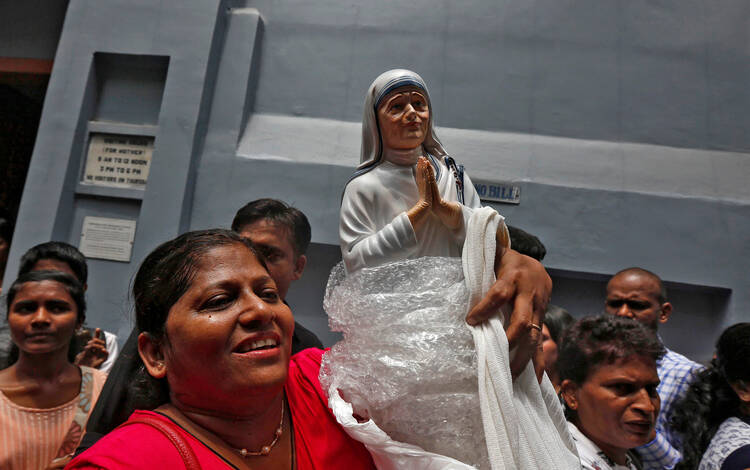 Pope Francis has his eyes fixed on Asia, where he sees the possibility of a new springtime for the church. He is seeking to normalize relations with China and has already made two journeys to this continent, where two-thirds of humanity lives, visiting South Korea (2014), Sri Lanka and the Philippines (2015). He is planning to return a third time in 2017 to visit India and Bangladesh.

He broke this news on the flight from Azerbaijan to Rome on Oct. 2, saying it was “almost certain.” His surprising announcement, however, was eclipsed by the media’s focus on what he had to say about accompanying gay and transgender persons. The news is nevertheless highly significant. India, the world’s largest democracy and second most populous country, is predominantly Hindu, while Bangladesh is the third most populous Muslim country in the world. Christians, a tiny minority in both states, welcomed the likelihood of Francis’ visit with immense joy.

It is not without significance perhaps, at least from the Indian perspective, that Francis broke the news on the anniversary of the birth of Mahatma Gandhi. India has 1.32 billion people and is second only to China (1.38 billion) in total population, but with its median age of 27 it is much younger than China.

A widely accepted tradition claims that St. Thomas the Apostle introduced Christianity to India in 52 A.D. and died there a martyr 20 years later. There is solid historical evidence for the existence of Christianity in India from around 300 A.D.

The Jesuits have a long history there too. Francis Xavier reached Goa in 1542 and started his very successful missionary work among the fishermen in the Coromandel Coast. In 1559, Jesuits founded the Madurai mission that developed the “accommodation method” of missionary activity much favored by Roberto de Nobili, an Italian Jesuit missionary there. Today Indians constitute almost 25 percent of the membership of the Society of Jesus.

Over the years, the Catholic Church has made a major contribution to the Indian people, particularly through education but also by charitable work, including that of Mother Teresa of Calcutta and her Missionaries of Charity. Notwithstanding all this, there are only 27 million Christians in India today, including 18 million Catholics; many come from tribal and Dalit communities. Hinduism has deep roots in this land; 80 percent of the people are Hindu. Dialogue with the other religions is therefore a must for Christians in India.

This is also true for Christians in Bangladesh, where 90 percent of the country’s 160 million people are Muslim and 9 percent are Hindu. Christianity first came to this land in the mid-16th century with the arrival of Jesuit, Augustinian and Dominican missionaries. Today there are 600,000 Christians in the country, including 350,000 Catholics. Many are descendants of Portuguese colonialists and Indian merchants from Goa, but most are members of the lower castes and tribals.

Commenting on the proposed visit, the Indian Jesuit Cedric Prakash, who now works with Jesuit Refugee Service in the Middle East, told America: “Francis has brought a new vitality to the church—particularly to the Catholic laity. Whenever he travels he is able to energize the local community, helping to deepen their faith by his incisive words and very meaningful deeds. Men and women of other faith traditions are also easily drawn to what he says and does. His ‘rockstar’ appeal certainly goes a long way in strengthening interreligious and ecumenical harmony. I have no doubt that this will all happen during his proposed visits to Bangladesh and India too.”

At the same time, Father Prakash expressed concern that “both India and Bangladesh, in the recent past, have seen the rise of right-wing elements: ‘Hindutva’ in India and ‘Islamists’ in Bangladesh,” and he predicted they would not welcome the pope’s visit.

Francis will be the third pope to visit India and the second to go to Bangladesh. Blessed Paul VI went to India in 1964 for the International Eucharistic Congress in Mumbai. St. John Paul II visited in November 1986 and went to New Delhi in 1999 to release the apostolic exhortation “The Church in Asia” after China blocked him from doing so in Hong Kong. St. John Paul II also made a 24-hour visit to Bangladesh in  November 1986. The Vatican has yet to give the dates for Francis’ visit, which now appears certain.