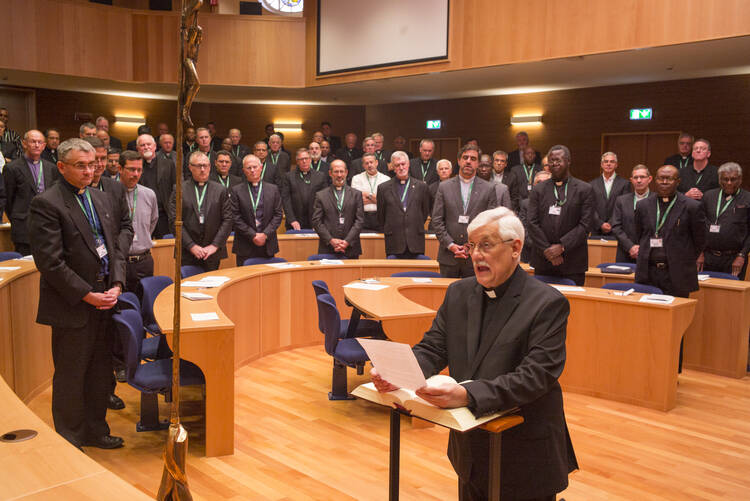 Jesuits from 62 countries have chosen “a man of deep prayer” and “one who is without fear” in electing Venezuelan-born Arturo Sosa Abascal as the new Superior General of their order, said Father Timothy P. Kesicki, the president of the Canada and United States Provinces, a few hours after the decision was announced on Friday.

Those two qualities are essential for the head of the order, Father Kesicki told America. The Superior General has “first and foremost” to be a man of prayer because he takes his decisions in prayerful discernment, he said.

Furthermore, he must have “a holy boldness, an apostolic aggressivity” Father Kesicki said, “because we are a missionary order that is called to go to the furthest corners of the earth, and do so without fear.”

What's it like behind the scenes of electing a new superior general? Tim Kesicki, S.J. explains.

He recalled that Pope Francis put this in another way when, on the occasion of the canonization of Peter Faber, he told Jesuits, “We must ask ourselves, do we have great vision and impetus? Are we also daring? Do our dreams fly high? Does zeal consume us? Or are we mediocre and satisfied with our ‘made in the lab’ apostolic programmers?” In selecting Father Sosa, a political scientist and former provincial of the Jesuits in Venezuela, the Jesuits saw in him these very qualities.

Father Sosa is the 31st successor to St. Ignatius of Loyola, who founded the Society of Jesus in 1540. He is the first non-European and the first Latin American to head what is today the largest religious order of men and brothers in the Catholic Church.

“As someone from the New World, he brings the riches of the Latin American church and knows also the challenges,” Father Kesicki said. “He is also a man with cross-cultural experience, having studied at the Gregorian University in Rome as well universities in his homeland. Moreover, besides Spanish he is fluent in English and Italian, and he understands French. He can therefore relate and communicate with members of the order from different lands.”

Furthermore, he said, “coming from Venezuela he has direct experience of some of the challenges we face in the United States, and is especially aware of the difficulties migrants from Latin America face.”

The new Jesuit leader will be 68 years old on Nov. 12, and is elected for life. But when I suggested to Father Kesicki that by choosing a man of that age, the electors imagined that he would eventually resign as his three predecessors did, he replied that the Constitution requires that the person elected should not be too young, because he might lack wisdom and experience, but also not too old to have the energy to do the job.

Early this morning the 212 electors that chose Father Sosa first concelebrated Mass in the nearby Church of the Holy Spirit, and then, at 9 a.m., entered the hall where the 36th General Congregation is being held. Before voting, they listened to an exhortation and prayed in silence for almost an hour. The election process was all over in less than 90 minutes, after Father Sosa reached the required majority of the 212 votes cast. As in papal elections, the final vote was not disclosed, but his election was greeted with warm and sustained applause from the delegates.

“I felt a tremendous joy, happiness and consolation when he was elected,” a clearly delighted Father Kesicki said. He was one of the 31 delegates from Canada and the United States province who voted in the election.

Immediately after the election, following the traditional praxis, Father Antonio Spadaro, the director of La Civilità Cattolica and one of the electors, phoned Pope Francis on behalf of G.C. 36 to inform him of the result. Only afterward was the news announced to the outside world.

Francis has known Father Sosa for many years from encounters in Latin America; reportedly when he met him again in Rome after becoming pope, he joked, “I knew you first as a young colt!” Father Sosa was then delegate of the Superior General, Adolfo Nicolás, to the international Jesuit houses in Rome, namely the Gregorian University, the Biblicum, the Orientale and the Vatican Observatory.

Asked whether the decision to choose a Latin American was influenced by the fact that the church already has a Latin American pope, Father Kesicki was doubtful. “There’s never an overt political calculus [like that],” he said. On the other hand, he acknowledged that “it’s not a big surprise that the new Superior General is from the global south, given that 59 percent of the delegates at G.C. 36 come from there.” He recognized that it is “a historic choice” and that the new leader’s “perspective” will be “different to that of Father Nicolás, who came with an Asian experience.”

This was the fourth time that Father Sosa has participated in a General Congregation. He recalls that he was “the youngest delegate” at G.C. 33, which elected Peter Hans Kolvenbach as Superior General. He was also present at G.C. 34, which continued unfinished business from the previous congregation including aligning the Constitutions with the new Code of Canon Law. And he was an elector once again at G.C. 35, which chose Adolfo Nicolás to head the order.

The new Superior General will now participate in the rest of the General Congregation, the supreme organ of government of the Society of Jesus. The participants will discuss the challenges facing the order and decide on the best road ahead.

Father Sosa will be received in audience by Pope Francis very soon, and will present his vows to him. Given that they are both native Spanish speakers and have so much in common with respect to the history of Latin America and the church there, Father Kesicki believes there will be “an initial ease of communication.” This commonality also gives him an advantage in terms of relating to the Vatican and the church in Rome, he added.

@gerryorome
Show Comments (
3
)
Comments are automatically closed two weeks after an article's initial publication. See our comments policy for more.
William Rydberg
5 years 1 month ago
Interesting feedback from the Superior that governs and appoints America Magazine Management on behalf of the Society of Jesus, CANADA and United States Provinces. The Superior Fr Matt s.j. Reports to concerning America Magazine.
William Rydberg
5 years 1 month ago
Let's pray that the first thing the Father General discusses with the Pope is World Peace and the current high threat of Thermonuclear War... More news on the threat: http://abcnews.go.com/International/ways-russia-telling-people-prepare-war/story?id=42800992 in Christ,
Luis Gutierrez
5 years 1 month ago
Holy boldness? What about creating an order of Jesuits nuns? I know one or two women who would qualify as Jesuit priests. In today's Church, now that we have St John Paul II's Theology of the Body, female Jesuit priests would add a new dimension to the Ignatian magis.