Has there been a power shift in the Vatican under Pope Francis?

Has there been a power shift in the Vatican under Pope Francis? 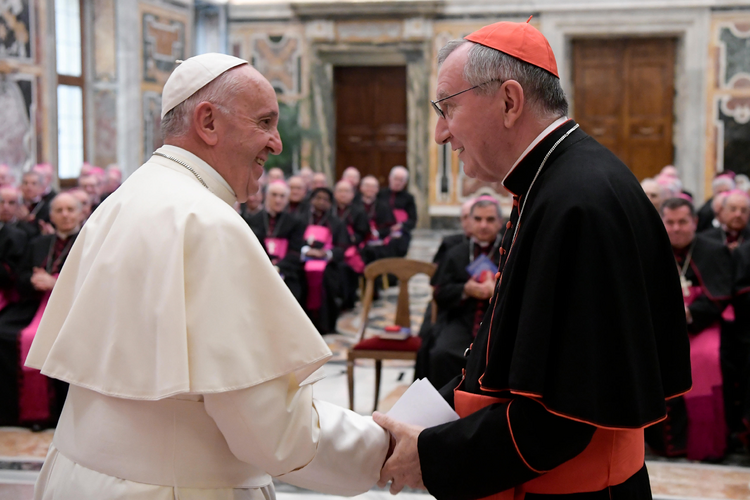 Has there been a power shift in the Vatican under Pope Francis? Has the Secretariat of State lost its traditional role as the pope’s main adviser, being replaced by the council of cardinals that Francis established soon after his election? Where will power lie once the reform of the Roman Curia has been completed?

These questions are being asked in the Vatican today as the council of cardinal advisers plays a highly significant role in advising, offering suggestions or making proposals to the Argentine pope.

On March 17, 2013, four days after his election, Francis invited Cardinal Óscar Rodríguez Maradiaga to lunch and informed him of his decision to establish this council. He had already decided on its membership and asked Maradiaga to be its coordinator.

He then informed the secretary of state of his decision and asked that it be made public. But that did not happen until April 13, when the Vatican issued a press communique and published the names of the eight cardinals Francis had chosen as advisers.

Francis formally established the council in a chirograph on Sept. 28, 2013. There he revealed that in the pre-conclave meetings of cardinals it was suggested that the next pope “establish a small group of bishops from the different parts of the world” whom he “could consult on specific issues, either individually or as a group.”   Francis said that after his election he concluded such a body “would be of considerable assistance” to him “in carrying out the pastoral ministry of the Successor of Peter.”

From his experience as provincial superior of the Jesuits in Argentina he knew well the value of advisers, and in the chirograph he assigned them a dual role: “to help” him “in the government of the universal church” and “to study a project” for the reform of the Roman Curia.

He said he wanted the council to be “a further expression of episcopal communion” and “of the assistance” that bishops throughout the world “can offer to the Petrine office.” He therefore chose eight cardinal advisers: seven from dioceses on different continents and one from the Roman Curia.  He appointed an Italian bishop as its secretary.  In April 2014 he named Cardinal Pietro Parolin, the secretary of state, as its ninth member (hence the nickname “The C9”). Before that he had only been invited to its sessions.

Francis convened the council’s first meeting for Oct. 1-3, 2013. Since then it has met 16 times. Each meeting lasts three days; Francis is present for most of the time. In addition, he has consulted its individual members on numerous occasions.

A glance at the range of topics discussed by the council is quite revealing and raises the question as to whether the real power has moved from the Roman Curia to this body.

The C9 has devoted much time to the reform of the Roman Curia.  It makes proposals regarding structures and nominations, but Francis takes the final decision. This has resulted in the establishment of the Secretariats for the Economy and for Communications, and in the creation of two new dicasteries (departments): for the Laity, Family and Life; and for Integral Human Development.  It is now reviewing the work and structure of the Vatican’s tribunals, congregations and the secretariat of state. The reform process could take some years more.

Besides all this, the C9 has been involved in the revision of the regulations for the Synod of Bishops, the preparation for the synods on the family, the institution of the commission for the protection of children and the reform of the Governorate of Vatican City State.

Whereas in the past popes were largely dependent on the Roman Curia, especially on the Secretariat of State, for advice on major issues, that is no longer the case. While Francis meets periodically with the heads of all Roman Curia offices and has regular one-to-one sessions with its senior officials, he is no longer limited to their input because he has the C9. He thus governs with greater independence from the Roman Curia than his predecessors.

As one C9 cardinal told me recently, “Pope Francis truly believes in a collegial style of government; we see this clearly in our meetings. He listens carefully and takes our advice seriously.”  But not everyone in the Roman Curia is happy at this development, as one senior Vatican official told me recently.

Show Comments (
3
)
Comments are automatically closed two weeks after an article's initial publication. See our comments policy for more.
Luis Gutierrez
3 years 4 months ago
The real power shift we need is from an unbalanced male-only hierarchy to a balanced male/female hierarchy. St. John Paul II's Theology of the Body is a biblical exegesis of the unitive complementarity (communio personarum) of man and woman; it is not a patriarchal gender theory of complementarian sex/gender stereotypes. Our Catholic faith is that the Church is "one, holy, catholic, and apostolic." To keep insisting that the apostolic mark of the Church is dogmatically patriarchal is utter nonsense. For the new evangelization, we need women deacons, women priests, and women bishops. Appeal to Pope Francis http://pelicanweb.org/CCC.TOB.120.html
William Rydberg
3 years 4 months ago
Isn't the Curia there exclusively to assist the Pope and preserve records and sundries for posterity? Accordingly, to suggest that the Pope is accountable to the Curia for anything other than being its Pastor and also its Employer is a stretch. in Christ,
Henry George
3 years 4 months ago
Personally, I wish the Pope had a few Catholics who work daily with the homeless/poor/immigrants/disabled. A more human voice representing the powerless.
Advertisement

This article also appeared in print, under the headline “Vatican Power Shift,” in the October 24, 2016, issue.