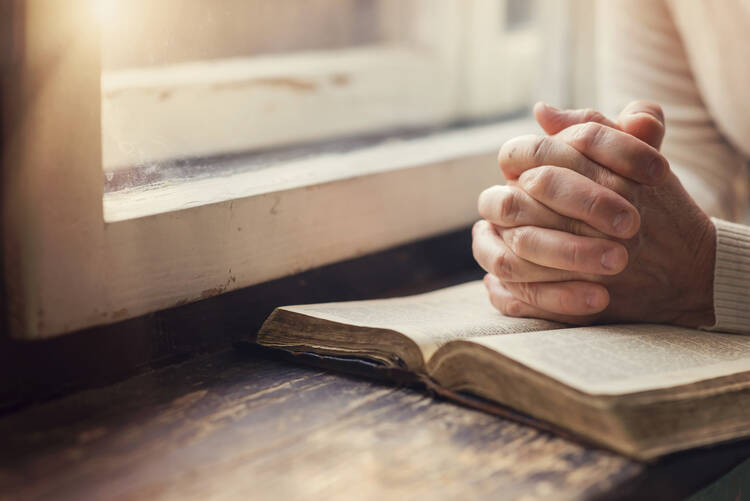 “He also told this parable to some who trusted in themselves that they were righteous and regarded others with contempt” (Lk 18:9)

Liturgical day
Thirtieth Sunday in Ordinary Time (C), Oct. 23, 2016
Readings
Readings: Sir 35:12-18; Ps 34:2-22; 2 Tm 4:6-18; Lk 18:9-14
Prayer
Consider your own faith and your relationship to God. When have you considered yourself spiritually superior to others? Have you ever scorned or considered people of no account? How have you been able to see God’s mercy active in your life and the lives of others?

The introductory line to Jesus’ parable of the Pharisee and the tax collector is as important to understand as is the parable itself. The Gospel of Luke, the only Gospel in which this parable is found, sets the scene. Following the parable of the unjust judge and the widow, Jesus “also told this parable to some who trusted in themselves that they were righteous and regarded others with contempt.” Jesus told this parable “to some,” who were standing in front of him. Since the parable contrasts a Pharisee and a tax collector, the original audience probably included some Pharisees along with other people, like Jesus’ own disciples. This hypothesis is strengthened by the fact that earlier in Luke (16:14 and 17:20) there are Pharisees with Jesus who are challenging his teaching.

In light of centuries of Christian criticism of Judaism and Jewish religious practices and piety— based to a large extent on the presentation of the Pharisees in the Gospels—it is important to stress that the Pharisees were a small group within Second Temple Judaism and were not representative of all Jews. Even more, not all Pharisees are implied by the phrase “some persons” in this passage And most significantly, the tendency to religious self-righteousness and confidence in themselves that “some persons” display is a tendency that bedevils religious persons in every age.

These persons, Luke tells us, “trusted in themselves that they were righteous.” Note that it is not God, but themselves, in whom they trust. The Greek verb that is translated “trust” in this verse is in the middle perfect passive tense and might be translated “were persuaded in themselves”—that is, they were “sure” or “certain” they were righteous people. “Righteous” (dikaioi), in this context, would mean people who were certain of their vindication before God because of their religious piety and their fulfillment of the dictates of the Torah.

Not only are they convinced that they are righteous; these persons “regarded others with contempt.” The word translated here as “others” is even more inclusive than might first appear, since the Greek term means “the rest,” that is, “everyone else.” This is the sort of in-group/out-group mentality that can infect religious people, often members of small groups within a larger religion, who are certain that everyone else is in a state of perpetual error. Francois Bovon, in his Commentary on the Gospel of Luke, characterizes this religious mentality as revealing a “fragile arrogance that perpetuates itself only by criticizing others” and maintains itself “by a pretension, more social than psychological, to belonging to a superior class of the population.”

And it is not just a belief that one is right and the others are wrong. The translation of exoutheneō as “have contempt” is spot on, though it could also be rendered as “to scorn” or “to hold someone to be of no account” or even “to hold someone to be nothing.” For instance, in Luke 23:11, “Herod with his soldiers treated [Jesus] with contempt [exouthenēsas] and mocked him.” When we treat people with contempt, we deny their human dignity before God. And this is just the introduction to the parable!

The parable is not about disagreeing on points of religious teaching or practice; it is about becoming humble before God and recognizing the dignity of other human beings, especially those with whom we disagree and whom we are so willing to treat with scorn. Humility is based in respect for “others,” as Pope Francis wrote on Twitter (@Pontifex) on Sept. 21: “Dialogue is born when I am capable of recognizing others as a gift of God and accept they have something to tell me.”

The temptation to consider ourselves more righteous than others afflicts all of us, but it is curable. We need to see these “others” as people just like us, sinners who rely on God’s mercy to be healed. The tax collector cried out, “God, be merciful to me, a sinner!” Jesus tells us that this man was justified, or “made righteous,” not by his own certainty but by the judgment of a merciful and loving God.

This article also appeared in print, under the headline “The Righteous Ones ,” in the October 17, 2016, issue.