The spiritual contest demands that we keep fighting and not give up. 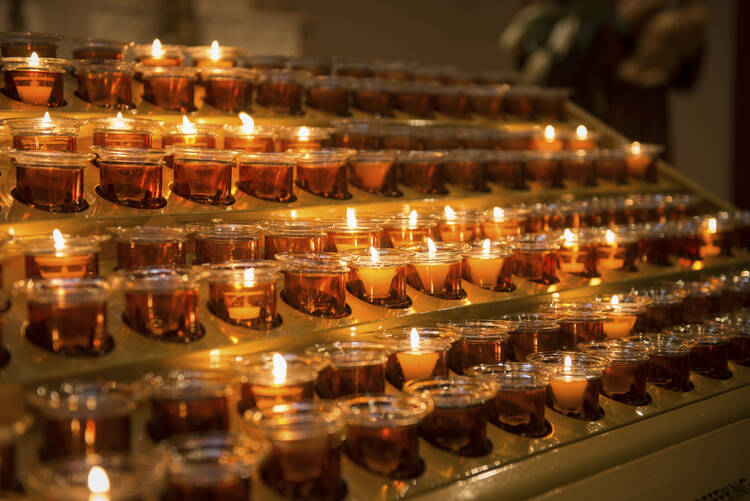 “Yet because this widow keeps bothering me, I will grant her justice, so that she may not wear me out” (Lk 18:5)

Reflect on the imagery of spiritual battle. When have you needed to be steadfast in the spiritual life? How has God supported you during the battle? Which sources—friends, prayer, the sacraments and so on—have been essential for you when you have wearied of the fight?

The spiritual life is often likened in the New Testament to a battle against foes. Jesus describes establishing God’s kingdom by tying up the strong man, Satan, and plundering his house (Mk 3:22-27), and the apostle Paul instructs the Christians in Thessalonica to “be sober, and put on the breastplate of faith and love, and for a helmet the hope of salvation” in order to be armored for the spiritual fight (1 Thes 5:8). The foes against which one fights might be external enemies, the powers of darkness or internal enemies, like the seven deadly sins or the desire to give up the fight and retreat.

The spiritual contest demands that we keep fighting and not give up. Jesus’ parable of the widow and the unjust judge highlights the steadfast stance necessary for a battle, even more than English translations suggest. When the unjust judge finally determines to help the widow, he says, “Though I have no fear of God and no respect for anyone, yet because this widow keeps bothering me, I will grant her justice, so that she may not wear me out by continually coming.” The Greek of this passage, however, is a bit more pugilistic.

Though the NRSV says “keeps bothering me,” the word translated as “bother” is kopos, which has as its primary meaning “beat” or “punch.” In the same way, though the judge says he will grant justice “so that she may not wear me out” in the NRSV, the phrase translated as “wear out” is the Greek verb hypopiazo, which literally means “give a black eye” or “strike in the face.” It is therefore possible to translate the passage more concretely: “Though I have no fear of God and no respect for anyone, yet because this widow keeps hitting me, I will grant her justice, so that she may not give me a black eye by continually coming.”

Perhaps this translation is a little too blunt, and the figurative meanings are certainly proper, but it evokes a more visceral response to the spiritual life as a battle in which steadfastness and persistence are essential and in which one must be prepared always to get ready to rumble. The spiritual life is not a curated Instagram account. Sometimes it gets down and dirty, and the only way to get to God is through a tremendous effort expended on fighting in times of desolation, when God feels distant, our enemies seem powerful and near, and we feel weak and defeated.

At the most practical level, the parable encourages us not to give up even when the odds seem ever against us, especially since God is not an unjust judge. But this does not mean our spiritual fight is always a lonely battle. A fascinating account from the Exodus narrative, in which Amalek comes to fight with Israel, suggests that we also need some help along the way to remain steadfast. While this passage may be read at a number of different levels, allegorical included, we can also read it at a literal level, in which Israel is simply engaged in a military battle. Moses, whose behavior is key to Israel’s success, begins to weaken physically; and his hands, which need to be held up, “grew weary.” The support his brother and friend give to him is practical—they get him a stone to sit on and they hold up his hands—so that the battle can be won. As important as personal perseverance is in the spiritual life, sometimes we all need help—practical, rock-solid and supportive—to get through the battle. Human friendship and assistance in our darkest times are not superfluous but an essential component of our fight.

In the spiritual life, it is necessary to persevere and to join with friends when the battle is hard. To draw sustenance, we must continue to go to the sources that refresh us: friends, prayer, the sacraments, the Mass and Scripture, all of which equip us for the spiritual battle, and to recognize that God is always with us too, truly fighting at our side.

This article also appeared in print, under the headline “Prepare for Battle,” in the October 10, 2016, issue.