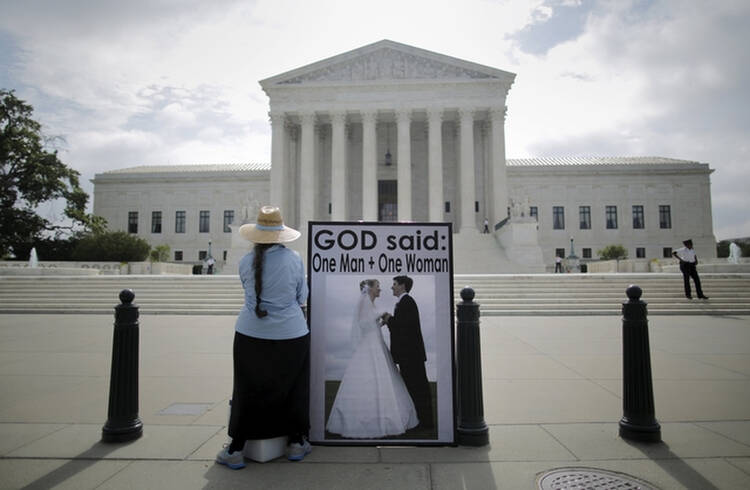 Does going to Mass each week make American Catholics fall in line with church teaching on issues like contraception, abortion and L.G.B.T. rights? Not necessarily.

That’s according to a Pew Research Center report released Sept. 28, which measured the attitudes of Americans on three culture-war fronts that in recent years have clashed with religious liberty: whether vendors like bakers and florists can refuse to cater to same-sex weddings; whether transgender people can choose which bathroom to use;  and whether employers can opt out of providing insurance plans that cover contraception.

Most American Catholics, including those who go to church on a regular basis, have no moral problem with contraception, the survey found.

Just 8 percent said contraception is morally wrong, with 89 percent saying it was either morally acceptable or not a moral issue at all.

The Catholic Church teaches that artificial contraception, such as condoms and birth control pills, is morally unacceptable.

This teaching is rejected even among Catholics who attend Mass at least weekly, who tend to hold views on other social issues that fall more in line with official teaching when compared to the wider Catholic population. About one in 10 (13 percent) in this group said contraception is morally wrong, with 87 percent saying it is either acceptable or not a moral issue.

In recent years, many Catholic institutions have sparred with the federal government over a rule that requires employers to provide insurance plans that cover contraception. Some Catholic leaders have argued that doing so would make them complicit in behavior they find sinful, thus violating their religious freedom.

The Pew poll found that a majority of U.S. Catholics seem to reject that argument.

Sixty-five percent of Catholics say employers should not be able to opt out of the law based on religious objections, while 32 percent say they should. Those numbers are nearly identical to the views of the U.S. population as a whole.

On the issue of abortion, about half of all U.S. Catholics say it is morally wrong, though that number shoots up to 83 percent among Catholics who attend services regularly.

Another issue that has spawned numerous court cases, pitting religious liberty against advances for gay and lesbian Americans, is whether or not business owners with religious objections to same-sex marriage can withhold services for gay weddings.

There have been a handful of lawsuits in recent years by Christian bakers, florists and photographers who say they should not have to provide services to same-sex couples getting married. They say doing so infringes on their religious liberty, while critics contend such views discriminate against gays and lesbians.

Overall, Americans are split on the question, with 49 percent saying businesses should be required to provide services and 48 percent saying they should have the right to refuse.

But Catholics seem slightly more supportive of the rights of gay couples, with 54 percent saying businesses should be required to provide services and 43 percent saying they should be able to refuse.

When it comes to views on homosexual behavior, church attendance affects what Catholics believe. The church teaches that gays and lesbians should not face unjust discrimination, but it condemns both same-sex marriage and sexual acts.

About two-thirds of all U.S. Catholics (64 percent) say that homosexual behavior is either morally acceptable or not a moral issue at all, while 32 percent say it’s morally wrong.

Then there’s the issue of bathroom access for transgender people. Last year, some states considered legislation that would require people to use bathrooms corresponding to their birth gender. Supporters said such laws were needed to protect people who felt uncomfortable sharing facilities with people of another biological sex, while critics said they were largely unnecessary and discriminatory against a small minority.

A slight majority of Americans (51 percent) said in the survey that individuals should be able to use the bathroom that corresponds with the gender with which they currently identify, while 46 percent say people should use facilities that correspond with their gender at birth.

Church leaders have generally not been as vocal on this issue as they have on contraception and same-sex marriage. But just this week, in response to threats by the N.C.A.A. to punish colleges and universities that don’t offer gender-neutral facilities, the president of the University of Notre Dame, Father John Jenkins, penned an essay in The Wall Street Journal calling for understanding between those with differing views on the issue.

That may be easier said than done.

The Pew poll found that only about two in 10 Americans could sympathize with both sides when considering the questions about contraception insurance, wedding vendors and bathroom access.

Catholics, however, fared a bit better on the understanding front. Still, only about a quarter said they could see where both sides were coming from.

The survey polled 4,538 Americans earlier this summer. The margin of error for the full sample is plus or minus 2.4 percentage points.

http://hvr.co/2cVOhAg There is also a podcast from last night of the John Batchelor Show, the most eclectic show in US media. The show leans center right but will have people on from all over the political spectrum. Batchelor interviews Epstein on this topic. If anyone should listen, there is a second segment after the music, his closing theme music is a 1934 hit song and always precedes the last segment of the night. The second segment is on the "All Comers policy." Religious liberty is now a term of bigotry and the bullies are enforcing their one sided point of view mainly through the American Civil Liberties Union which is not for anything that are civil liberties. http://bit.ly/2dKxMGc