Lessons from the 10 lepers 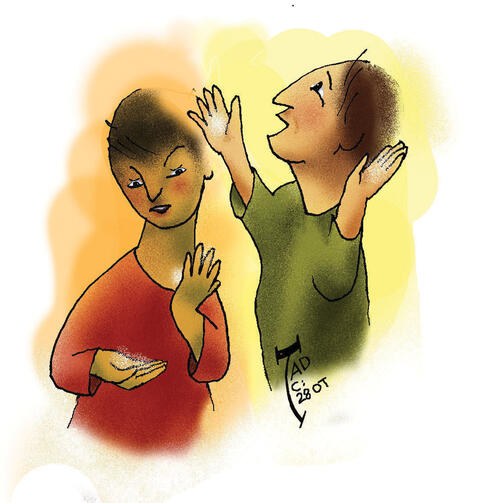 Liturgical day
Twenty-eighth Sunday in Ordinary Time (C), Oct. 9, 2016
Readings
Readings: 2 Kgs 5:14-17; Ps 98:1-4; 2 Tm 2: 8-13; Lk 17:5-10
Prayer
Consider the 10 lepers. All were healed physically, but only one returned to thank Jesus. Have you given thanks for God’s mercy in your life? How have you shown your faithfulness to God? Have you reached out to those people today who might be considered beyond God’s mercy and salvation?

The story of 10 lepers being healed is found only in Luke’s Gospel and represents an event that takes place as Jesus and his apostles are travelling toward Jerusalem. Though short, the account is full of salvific meaning. Numerous scholars have pointed to the geographical difficulty in the description of Jesus “going through the region between Samaria and Galilee,” since no such geographical region exists, but Joseph Fitzmyer, S.J., must be correct when he says the geographical reference, whatever its difficulties on a map, “alerts the reader once again...to the evangelist’s theological concern to move Jesus to the city of destiny, where salvation is to be definitively achieved for human beings” (Luke, Vol. 2).

This unique account also alerts us once again that the salvation that Jesus is traveling toward Jerusalem to accomplish is intended for all people. The 10 lepers, after all, comprise a group of people excluded from community life because of their medical condition, and one leper was considered to have been doubly excluded because of his ethnicity. He was a Samaritan.

The lepers, “keeping their distance,” call out to Jesus, not specifically to heal them but to “have mercy on us!” Their call for mercy, though, must indicate a desire to be healed of their afflictions. And since the lepers call out to Jesus by name, they seem to have some previous knowledge of him. They also call him “Master” (epistata), a word that occurs only in Luke’s Gospel and, except for this passage, is used only by Jesus’ disciples. This calling after Jesus already indicates a modicum of faith.

When Jesus sees them, he sends them to the priests, who will determine according to the law of Moses, specifically Leviticus 14, whether they have been healed of leprosy. The lepers immediately demonstrate their faith by following Jesus’ instruction even though they still have their disease. Only as they are on their way, do we find out that “they were made clean.” Jesus responds to their cries for mercy by drawing from them an act of faith that results in their physical healing.

But only the Samaritan turns back to praise God and (literally translated) “fell before his feet” and thanks Jesus. Jesus asks rhetorically, “Were not 10 made clean? But the other nine, where are they? Was none of them found to return and give praise to God except this foreigner?” This questioning is designed not for the missing nine or the Samaritan, but for the consideration of Jesus’ disciples and curious onlookers. What does it mean that only “this foreigner” returned to thank God?

Jesus then addresses the healed Samaritan: “Get up and go on your way; your faith has made you well.” But was not the Samaritan already well even before he came back praising God and giving thanks to Jesus? Jesus had healed him as well as the nine others who had leprosy. It was only the Samaritan who returned to thank Jesus for his healing.

But how is that evidence of faithfulness instead of thankfulness? Faithfulness is demonstrated in two ways. One, the Samaritan recognizes that mercy has come from Jesus, and returning to thank Jesus is a form of faithfulness to the mercy of God that has been made manifest; and two, the Samaritan’s thankfulness for his physical healing shows evidence of deeper, spiritual healing, which is our true salvation. It is here that the odd geographical phrase “between Samaria and Galilee” makes sense. The boundary lines between who might be saved, leper or clean, Samaritan or Jew, have been breached. The Samaritan’s return allows Jesus to demonstrate that no one, not a leper, nor a Samaritan, is beyond God’s mercy. Anyone can experience God’s salvation, shout with joy for it, praise God for it and walk along the same road Jesus is travelling. Between Samaria and Galilee, there is only the kingdom of God, in which salvation is available to all who call out for mercy and respond to God’s call with thankfulness and praise.

This article also appeared in print, under the headline “Along the Road,” in the October 3, 2016, issue.