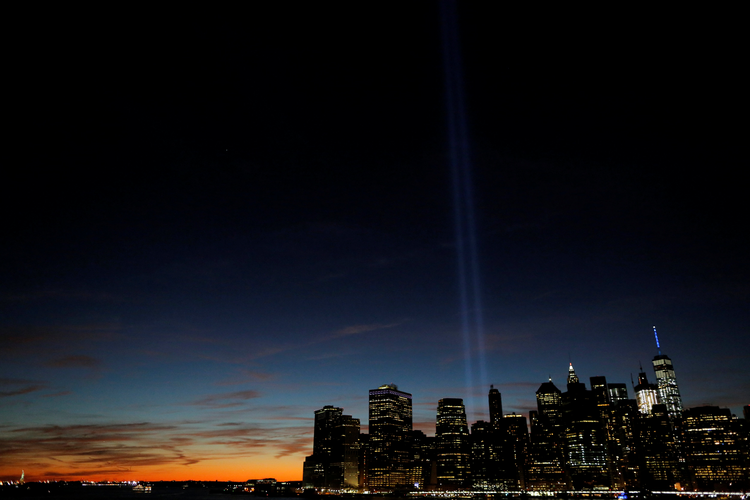 The "Tribute in Light" is seen on the eve of the 15th anniversary of the 9/11 attacks on the World Trade Center in New York Sept. 10. The Sept. 11, 2001, terrorist attacks claimed the lives of nearly 3,000 people in New York City, Shanksville, Pa., and at the Pentagon. (CNS photo/Andrew Kelly, Reuters)

The radio went silent a few minutes before nine that Tuesday morning. I was preparing to celebrate Mass at St. Augustine Parish, in Park Slope, Brooklyn. Typically, I was still in my room, hurrying less the Mass start late. I do remember thinking, that’s odd. NPR just disappeared from wherever it is that NPR comes from. For me, it was just “the great out there.”

They had been reporting that a plane had hit a tower of the World Trade Center. It hadn’t been all that long since a small plane had struck the Empire State Building. I remember wondering, do they give anyone a pilot’s license?

The pastor, Father Whelan, concelebrated the Mass. His beeper sounded during the distribution of Communion, and he didn’t reappear until Mass had ended. Then he told us that a second plane had struck the World Trade Center; that this was no accident; that everyone should return to their homes. The city was under attack.

Father Robert Whelan, whom I called Robo, was a chaplain for the M.T.A. police, the Metropolitan Transit Authority. I remember joking with him, as he prepared his police uniform for marching in the St. Patrick’s Day Parade, with a fervor bordering on the religious, that he wasn’t a real New York City policeman. “So, you only get called when someone commits a crime in the subway, at the airport or on the docks?

“I get called when someone commits suicide by stepping in front of a subway train. The poor conductors carry guilt the rest of their lives.” He had made his point, and I never joked about it again.

Father Whelan and I couldn’t turn away from the television screen that morning, but the Kansan in me suggested that we go up on the roof of the rectory, which is about a mile, at most, from the World Trade Center. See what we could see. A wall of smoke covered Manhattan Island. It climbed skyward, beyond sight.

My mother called from Kansas. Only once. After that, the circuits went dead. America itself was now part of “the great out there.” People were hiking home at midday, across the Brooklyn Bridge, as though we lived in a small town and walking home had always been a possibility.

Like most Catholic churches, St. Augustine held a special, unannounced Mass that evening. The place was full. We were cut off from “the great out there,” but we were more than ever united in our neighborhood.

Right after Mass, Father Whelan received a new message. All available chaplains were to report the Brooklyn M.T.A. Headquarters. Robo asked if I wanted to go with him. I said, yes. Neither of us knew where we were going. We were, as he would put it, “responding.”

New York streets are never empty, but we drove to downtown Brooklyn on roads that were under curfew. A cop was on every corner. They’d see the Roman collars. No one stopped us.

It took awhile to report to the correct office in the M.T.A. building. Robo was showing his badge at every door. We were entering a command post under attack. I kept saying, “I’m with him.” We waited almost an hour in downtown Brooklyn because two more chaplains were on their way. We would then be taken by police cruiser to Ground Zero.

What 9/11 can teach us about love, heroism and courage
David J. O'Brien

The woman cop who drove asked us if we minded if she sped across the deserted Brooklyn Bridge. “We’ve received reports that they’re going to blow the bridges. A truckload of explosives has been seized on the George Washington Bridge.” We said that speeding would be fine with us. She made a small joke. There would still be enough time for her to go to confession. We were taken to One Police Plaza, a block or two from Ground Zero. You could see it at the end of the street, glowing with light.

Most New York police don’t live in Manhattan. It’s too expensive. They live on Long Island or Staten Island. Police units were being sent to retrieve the families of those who were missing. We were to be there, for the families, as they were brought in throughout the night.

I always began by asking family members if I could get them water, food or a blanket. Enough had been stockpiled to withstand a siege. Usually I asked who was missing. That’s when I learned that New York City cops grow in families. For almost every cop missing, there was another here with the family: a sister, a brother-in-law.

I spent a lot of time with a young bride and her mother-in-law. We kept talking about all the places, the emergency rooms, where her husband, her son, might be. Sometimes they would announced that a hospital had received incoming and that badge numbers would soon be known. I remember the brother-in-law of the officer missing, also a cop, pulling me aside. “Father, he’s not coming back. He’s not out there wounded. Either you lived through this or you didn’t.”

A Spanish-speaking family wanted to pray the rosary for their missing son. Their daughter, a police detective, asked if I could lead it. My Spanish was muy pobre. I said to tell her mother to start, and that I would join them.

And I remember three young black women, huddled together under a blanket, reminding me of Michelangelo’s Pietà. They quietly refused conversation. They just held each other and cried, for hours. Somewhere around two in the morning, I brought them water.

We stayed there through the night, waiting for reports from “the great out there.” Police Commissioner Bernard Kerik and Mayor Giuliani came to speak to the families. They said they were doing all they could to find their people.

In the Parable of the Prodigal Son, the Greek words choram makran are typically translated as a “distant country.” Literally they mean “the great open space,” “the great out there.” The prodigal son is lost out there, alone, away from the family who loves him.

The next day, as a young professor teaching four different classes at St. John’s University, I discovered that each class had lost at least two family members: an uncle or an aunt who worked in finance, a brother who was a fireman. I remember a young man saying he wanted Afghanistan bombed back into the Stone Age.

For almost every cop missing, there was another here with the family: a sister, a brother-in-law.

Fifteen years of response and retribution have come and gone, but my memory of that night is of the families, desperately awaiting word from “the great out there.” No, their children weren’t prodigals. Far from it. But they were lost and sorely missed. That’s what Jesus wants us to understand about God: God only wants us to come home. How we became lost, who is responsible, doesn’t matter.

Somewhere between three and four in the morning, we were told that a cruiser was coming to take us home. I remember waiting for it on the street. Flakes of ash were still falling like a heavy snow. An open caisson came down the street, full of soldiers with rifles. I remember thinking, I never thought that I would see a day when the National Guard was summoned, not to respond to a natural disaster, but, quite literally, to protect the homeland from “the great out there.”

Just before the cruiser arrived, four or five firemen emerged slowly from the wall of light that was Ground Zero. It followed them down the street, like a corona. They were so dirty, so tired, so young. Every one of them spoke as they came past us. “Hi Father.” “Hey Father.” It was as though these boys had come home safe, from the great out there.