No, there's no rift between Pope Francis and Pope Benedict 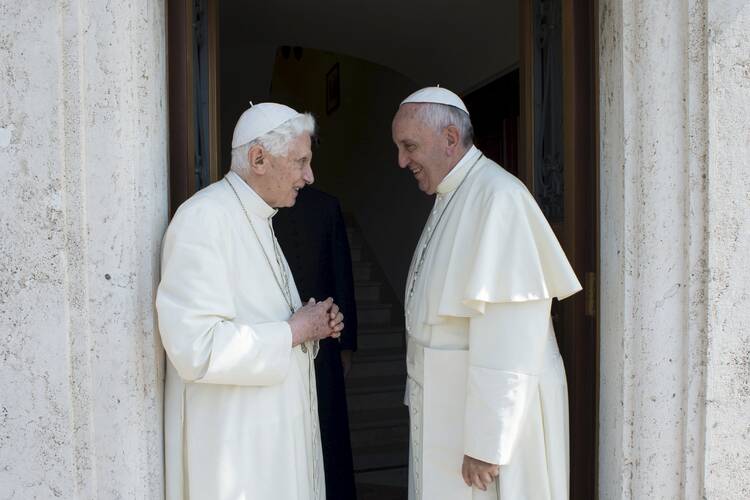 Retired Pope Benedict XVI talks with Pope Francis during a meeting at the Vatican in this June 30, 2015, file photo. (CNS photo/L'Osservatore Romano via Reuters)

Ever since Francis was elected pope on March 13, 2013, there has been much interest in and speculation about his relationship with his predecessor, Benedict XVI.

From the beginning, Francis made clear that he considers his predecessor a kind of “grandfather” in the family, whose wisdom and counsel he treasures and for whom he has the utmost respect.

Francis has visited him many times, and they speak by phone and communicate in writing. He encouraged Benedict to come out of his self-imposed seclusion and to be present at Francis’ first consistory for new cardinals, at the canonizations of John XXIII and John Paul II and at the opening of the Holy Door in St. Peter’s Basilica for the Jubilee Year of Mercy.

Over the past three years, however, some prelates and lay Catholic intellectuals and bloggers, part of that tiny minority who do not like the direction in which Francis is leading the church, have sought to portray their relationship in a less positive light. Some have even hinted at sharp theological differences between them regarding the liturgy and the family; others fail to recognize Francis’ “The Joy of Love” as a development of his predecessor’s teaching.

Twice this summer, however, Benedict has made clear that he does not share this distorted view of their relationship.

In an interview just published, but given after his resignation to Elio Guerriero, curator of his works in Italian and author of his new biography, Benedict declared, “obedience to my successor has always been unquestionable” and “then there is a sense of deep communion and friendship.”

Moreover, he said: “I personally felt deeply touched right from the start by Pope Francis’ extraordinary human warmth toward me. He tried to reach me by phone right after his election. He wasn’t able to get hold of me so he tried again straight after the meeting with the universal church from St. Peter’s balcony and he spoke to me in a very cordial manner.”

“Since then,” Benedict said, “he has given me the gift of a marvelous paternal and fraternal relationship. I often receive small gifts, letters written in person. Before undertaking any major trips, the pope always comes to visit me. The human kindness he has shown me is for me a special grace in this final phase of my life, which I can only be grateful for. What he says about being close to other people are not just words. He puts them into practice with me. May he in turn feel the Lord’s kindness every day. For this, I pray for him to the Lord.”

On the flight back from Armenia last June, Francis confirmed that Benedict has faithfully kept the solemn promise that he made in his farewell speech to the College of Cardinals on Feb. 28, 2013, when he said, “Among you, in the College of Cardinals, there is also the future pope to whom today I promise my unconditional reverence and obedience.”

Francis affirmed this when responding to a reporter’s question regarding the extraordinary statement made by Archbishop Georg Gänswein, prefect of the papal household and Benedict’s private secretary, in which he spoke about an “extended Petrine ministry” where one pope is active and the other contemplative.

He rejected Gänswein’s thesis and stated clearly, “There is only one pope.” Benedict “is the emeritus pope, the one who watches my back with his prayers.”

Alluding to attempts to drive a wedge between them, Francis said he had heard but did not know if it was true, “that some people had gone there [to Benedict] to lament about ‘this new pope’ and he sent them packing, in the best Bavarian style—politely, but he sent them packing.” The Jesuit pope added: “If it isn’t true, it is a good story, because he is like that. He is a man of his word, an upright, a completely upright man!”

If Francis feels “protected” by the emeritus pope, Benedict, speaking at the celebration for the 65th anniversary of his priestly ordination on June 28, stated frankly that he feels protected by his successor. Speaking without a script, he thanked Francis for his “kindness,” which, he said, “from the moment of your election in every moment of my life here reaches me. I feel it profoundly.... Really more than in the Vatican Gardens with its beauty, your goodness is the place where I live and where I feel protected.”

@gerryorome
Show Comments (
2
)
Comments are automatically closed two weeks after an article's initial publication. See our comments policy for more.
William Rydberg
6 years 4 months ago
As much as I admire Pope Benedict XVI, the ultimate decision belongs to Jesus-God come in the flesh. Vivat Jesus! Even a serving Pope cannot infallibly make that call while his predecessor lives, For a Pope's life is not his own, it belongs to Jesus according to Traditional Magisterial Catholic teaching confirmed in the Gospel. With that said, my Cardinal Archbishop teaches that Pope Francis is the universal Pope. Credo... in Christ, Blessed be the Holy Trinity
William Rydberg
6 years 4 months ago
Council of Constance evidences that a Pope is free to resign (ended Papal Schism). Deo Gratias,