More than a saint, Our Lady of Guadalupe represents Mexican identity

More than a saint, Our Lady of Guadalupe represents Mexican identity 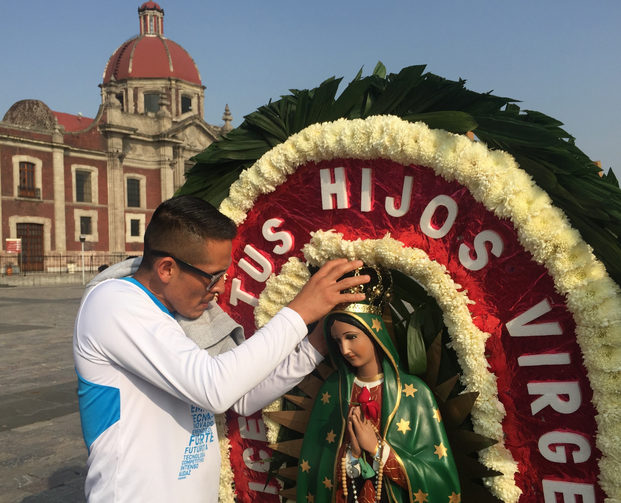 A man adjusts the crown on a statue of Our Lady of Guadalupe Dec. 6 outside the basilica named for her in northern Mexico City. The national patroness remains important in Mexico as source of spiritual inspiration, but even nonoreligious people identify with her. (CNS photo/David Agren)

Jonathan Gonzalez lugged a large statue of St. Juan Diego into the Basilica of Our Lady of Guadalupe on a recent Sunday, showing no signs of strain as he moved through the masses at the world's most-visited Marian shrine.

A farmhand from the outlying state of Hidalgo, he makes the 100-mile trip annually to the basilica on Tepeyac Hill in northern Mexico City, where a dark-skinned Mary appeared to indigenous farmer Juan Diego in 1531. Gonzalez makes the trip mostly out of faith, saying, "She's the mother of all Mexicans."

But he also goes to the basilica to give thanks for "miracles that have happened," although this year Gonzalez arrived with a special sense of gratitude and wanting to seek intercession for his wife, who he says is suffering from cancer.

Gonzalez's story is similar to many in Mexico, where the population views their national patroness as more than a saint and often as a mother, intercessor and icon whose importance transcends religion.

Millions of Mexicans descend annually on the Basilica of Our Lady of Guadalupe, especially for the feast day Dec. 12, with many making pilgrimages on bike or arriving on foot from the surrounding states. Some arrive from abroad.

The devotion shows few signs of fading, according to observers, while growth in the United States, through immigrant communities, is strong. A telenovela is also introducing Our Lady to Guadalupe to millions more in Central and South America, where, along with the Philippines, the devotion has deep roots.

Even Pope Francis has spoken of her importance and will visit the basilica on his February trip to Mexico, telling reporters recently, "If it weren't for Our Lady of Guadalupe, I wouldn't go" to Mexico.

Visitors arrive at the basilica throughout the year in pueblo and parish pilgrimages, as curious tourists and day-trippers or on work- and club-related processions -- arriving in everything from clown costumes to mariachi suits.

Some Mexicans, though, call themselves, "Guadalupanos," (followers of Guadalupe,) despite misgivings with the church -- or not being Catholic at all -- and find a sense of belonging and identity in the patroness.

"It's a symbol of national identity," said Jesuit Father David Velasco Yanez, a professor at Jesuit-run ITESO university in Guadalajara. "People might not be believers, not that faithful, not that participative in church life, but Guadalupano to the bone marrow."

Former Mexican President Felipe Calderon summed up the sentiments in a trip to the basilica, in which he said, "We're all Guadalupanos."

The patroness is deeply ingrained in the national mythology and history; her image appears on items as mundane as phone cards and lottery tickets. The independence and revolutionary movements marched behind images of Our Lady of Guadalupe, even though the latter were staunchly anti-clerical. More recently, perpetual anti-system candidate Andres Manuel Lopez Obrador has tried tapping the same ability to unify the masses by naming his upstart political party: MORENA -- or dark skinned lady and a common name for patroness.

"When people want to keep their religiosity, without maintaining loyalty to the church hierarchy, they become Guadalupano," said Ilan Semo, political historian at the Jesuit-run Iberoamerican University.

A 2014 survey by Gabinete de Comunicacion Estrategica found 66 percent of respondents said Our Lady of Guadalupe was "very miraculous." Another 49 percent acknowledged attending church on Dec. 12, her feast day. Local officials put annual attendance at the basilica in December at around 8 million.

Father Hugo Valdemar Romero, Archdiocese of Mexico City spokesman, said he sees signs of an expanding devotion as the number of pilgrimages and trips to the basilica increases each year.

He said the devotion has grown abroad, too, as Mexicans take images of the virgin everywhere they travel and the telenovela "La Rosa de Guadalupe" gains audiences in other Spanish-speaking countries, despite being "simple" and "banal" in many moments.

"It's grown the devotion to Our Lady of Guadalupe a lot in Latin America, through the transmission of its programs," Father Valdemar said.

The commercialization of Our Lady of Guadalupe presents potential problems, analysts say. The basilica grounds expanded in the last decade after donations by the Mexico City government and billionaire businessman Carlos Slim Helu, causing conflicts with vendors in the local area.

The soap opera also presents the faith in a problematic way, portraying Our Lady of Guadalupe as little more than a miracle worker.

"It's a caricature of the cult, of asking that she helps you when you're in an extreme situation of vulnerability," said Bernardo Barranco, an academic and author on Catholic matters in Mexico.

"The biggest risk isn't Mexicans' faith. It's not the devotion of the communities that organize the devotion, but mainly the usage by broadcasters and the archdiocese itself. It's the commercialization."

St. Juan Diego's canonization has not been well-received by Guadalupanos, with analysts saying an auxiliary figure was never going receive the same support.

"The virgin is the mother of God," said Gonzalez, who was lugging the St. Juan Diego statue, while his friends carried an image of Guadalupe.

At the basilica, most interviewees expressed simple, nonpolitical motives for making their trips.

"We come to give thanks for everything: work, family, health," said Jesus Romero, a driver for the mayor of a town in Hidalgo state.

Romero rode with 66 other cyclists for six hours to the basilica for the 18th straight year, though he has traveled there at other times and once moved toward the sanctuary on his knees to ask for "family unity."

Rafael Camacho and his wife, Sofia Palomar, give away 100 free tacos every month at the basilica as a way of repaying a "manda" (petition,) in which they asked for Palomar's mother to recover from a coma induced by a heart attack three years ago.

"She's everything," Camacho said of the virgin and her role in the country. "Everyone admires her."