Blessed Are The Pure of Heart: The Ellacuría Tapes 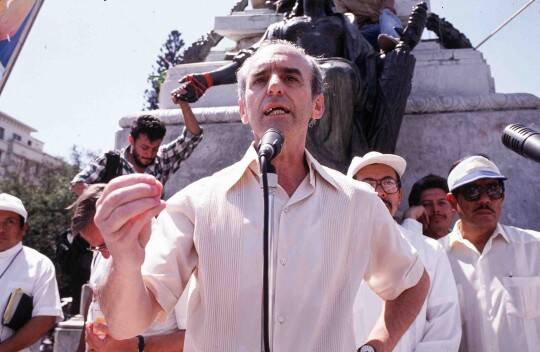 When we think of martyrs for justice in the world today, the beatitudes that immediately spring to mind may be “blessed are the peacemakers,” or even “blessed are those who hunger and thirst for righteousness.” We likely don’t give much thought to the martyrs as the pure of heart. The Ellacuría tapes, recently released by Loyola University Chicago to mark the 25th anniversary of the martyrdom of Ignacio Ellacuría and his companions at the University of Central America in San Salvador, paint a different picture for us. The man that we see in the tapes, Father Ignacio Ellacuría, is a man who is focused. The man that we see in the tapes is a man who doesn’t seem concerned with the lauds that he receives, or what indignities might come as a result of his work, be they from Washington, Moscow or even Rome. The man that we see in the tapes really only talks about one thing: the poor of El Salvador and the disconnect between their reality and that of the rulers of the country.

It is clear that Father Ellacuría, who was himself a philosopher by training, saw his role as the rector of the University of Central America as bringing to bear all of the intellectual resources of that institution to aid the situation of poverty and oppression in El Salvador. The first conversation that we hear Father Ellacuría engaged in is about the psychology of the Salvadoran president, which one can imagine he might have been schooled in by the psychologist Ignacio Martín-Baró, S.J., with whom he lived in community and who shared his fate on that evening in late November 1989. While political theory was not his first love philosophically, it is clear that he let the rights of the people bring him to an intellectual conversion. All of the metaphysics and phenomenology lessons of his old teacher, the Spanish philosopher Xavier Zubiri, would be applied to the political situation of the poor.

At one point in the tapes he even talks about the situation in Chalatenango, a rural state of the country on the border of Honduras which, if it weren’t for the fact that he and the other Jesuits of the community were pastorally engaged there among the poorest of the poor, he’d have no reason as a philosopher and university rector to know about. This is a man who, precisely because he was so seized by the image of Christ poor and marginalized among the people of El Salvador, because of the purity of his heart, could work for them and struggle for them with his whole being.

The pure of heart, according to the beatitudes, are the ones who see God. These new tapes remind us that Ignacio Ellacuría’s constant vision of Christ, which surrounded him in the economically poor and socially marginalized, pressed him forward in his work. In that purity of heart, in that vision of Christ, all of the varied aspects of his life as rector, scholar and pastor came together. The sum of those parts give us a man courageous enough to be a martyr, and passionate enough to know that the image of Christ which transfixed him, the image of what he called a “crucified people,”was something both worth living and worth dying for.