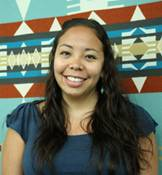 Clementine Bordeaux is an academic coordinator and lecturer in American Indian Studies at the University of California, Los Angeles. An enrolled member of the Rosebud Sioux Tribe, Clementine grew up on the Pine Ridge Indian Reservation in South Dakota, attended the Jesuit-sponsored Red Cloud Indian School, and later worked as youth ministry coordinator in Pine Ridge. In this podcast, Clementine describes her integration of Catholic and Lakota spirituality, her experience of attending the canonization of St. Kateri Tekawitha, and some of the challenges of Native students today.

What do you mean by "always remember who you are and tie what you hear in class to your culture"? What is the basis for people sharing, being interpersonal?
You ought to go see Lone Ranger with Johnny Depp. It is more than okay, it is fabulous. Did you see Avatar? Who guides you on what is okay and what you should see and read, etc.? How do you choose guides?
What is the relationship between your culture and Catholic spirituality?
Is it wrong to be problematic? Should one try to blend in and avoid controversy?
If a native person and a European have a baby, what race is the baby?
Do you know what "Tonto" means in Spanish?
Is racism a problem in the US? How about in US foreign policy?
What should native people seek from US law?
Is it true that Indians are Muslims? I admire you for not using "Indian". Whenever I hear someone use "Indian" to refer to US aborigines, I want to ask if these Indians are a security risk since many Indians are Muslims, something like a tenth of the population of India.
A bunch of people turned up for a talk at the local law school one evening while I was a student, the first year class room was full, and it was more of the same tedious story about "Indian law" in the US: native people were losing more of what the law claims is their sovereignty. Every time a tribe makes it into the Supreme Court, more of that sovereignty is whittled away. What struck me about this gathering, where, as a bio major I was looking hard for high cheekbones, black hair, the whole Hollywood thing on what someone is supposed to look like who calls herself a native person (in a state where "Maine native" means... I really don't know what it means), is how listening everybody in the room was. Maybe they were all tuned in across all frequencies to see if finally some justice was going to come their way or that way from European justice institutions, but even so, it was an absolutely unforced listening. I'm going to call it listeningness.
I read an account of an early settler in Maine, maybe in the seventeen hundreds, wandering back when there were huge forests in Maine before the farmers showed up, and this guy is walking on the pine needle carpet in an endless cathedral, which is what a mature pine forest looks like because the trees all lose their lower branches and it looks like columns holding up a high roof which is lost in murky mysterious gloom overhead--and the guy hears away, way off what sounds like Gregorian chant. So he continues and he finds some local people who had been taught Gregorian chant a hundred years previously by some French missionaries.
Okay, I'm editing this, to put a break between my settler story, which I read in the library of Saint Joseph's College in the early 1980's, in an old encyclopedia of something like Catholic Memories of Maine or something like that, and the joke, entirely separate, I'm ending out here with.
So God says to this guy, Okay, what language do you speak, I want to get you right, in your vernacular, like.
And the guy goes, like, What?--he didn't know what to say to God.
And so God says, Oh, I can see you're for real here, so sit down, buddy, and be at home.