‘I Am a Sinner’: The deep humility of Pope Francis 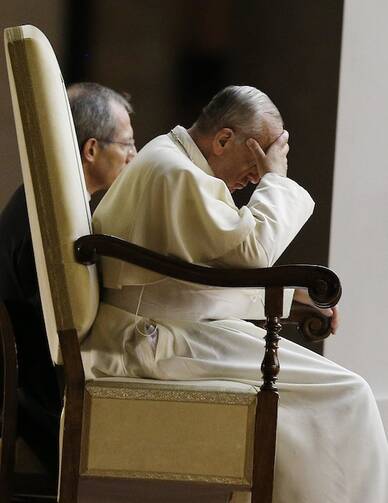 'Who is Jorge Mario Bergoglio?" "I am a sinner. This the most accurate definition. It is not a figure of speech, a literary genre. I am a sinner." These are words that readers might easily have skipped over. Our pope’s admissions and gestures of humility have, after all, become one of his trademarks. If he hadn't opened with a few self-deprecating remarks, then that might have been news. But canny Francis-watchers would know that the real bombshells—and surely with this pope, in this format, and at this length, there would be bombshells—would come along later.

Francis' humility, however, is not like Uriah Heep's: a purely formal show of being "ever so 'umble." Instead, it expresses a central conviction of the Christian faith. As we now know, Cardinal Bergoglio accepted his election to the papacy with the words: "I am a sinner, but I trust in the infinite mercy and patience of our Lord Jesus Christ." And these whispered words, I realized upon reading the interview, help to explain many of the pope's more pyrotechnic utterances.

For the Christian, the searing guilt one feels for one's sins is, or ought to be, underwritten with hope in the One who is "rich in mercy" (Eph 2:4). With great sorrow at having sinned, comes the greater appreciation of him who is able, and willing, to forgive us. Thus the famous words of 1 Timothy 1:15: "The saying is sure and worthy of full acceptance, that Christ Jesus came into the world to save sinners—of whom I am the foremost." Or as Paul writes in Romans, "where sin increased, grace abounded all the more" (5:20). From Paul and Augustine, right down to Dorothy Day and Mother Teresa, it is always the saints who are most painfully aware of how sinful they are, of how desperately they need God’s mercy. As St. Gemma Galgani puts it: "Think of all the sins that the greatest sinners have committed, I have committed as many."

If “sin” is a concept that has fallen out of fashion, word seems not to have reached Casa Santa Marta. Francis uses it often, and not only when speaking candidly of his own faults and sins. Elsewhere in the interview, he speaks of "the life of a human person" as "a land full of thorns and weeds," and—developing Augustine—outlines his vision of the church as a "field hospital" administering first aid ("Heal the wounds, heal the wounds"). Behind each of these images, of course, is a Gospel idea: "the cares of the world, and the lure of wealth" that risk choking out the sower's word (Mk 4:19), and Christ’s declaration, "Those who are well have no need of a physician, but those who are sick; I have come not to call the righteous but sinners" (Mk 2:17).

Several of Francis' favorite topics—confession, repentance, forgiveness—all presuppose sin, and sorrow for it. And it is within precisely these contexts that he has situated some of his most headline-grabbing remarks. His "ground-breaking" comments in La Repubblica on the salvation of atheists (incidentally, a possibility explicitly affirmed by Vatican II some 50 years ago) were prefaced by the "fundamental" observation that "God's mercy has no limits if he who asks for mercy does so in contrition and with a sincere heart." And in the America interview, the pastoral care of a "a woman with a failed marriage in her past and who also had an abortion" is broached in light of "the great benefit of confession... evaluating case by case and discerning what is the best thing for a person who seeks God and grace.” Significantly, the pope criticizes not only rigoristic confessors, but also the one who is “too lax,” who “washes his hands by simply saying, ‘This is not a sin.’” Francis’ field hospital, in common with its consultant Physician, is there to heal wounds, not deny that they exist.

Francis, it seems, is eager for us to "talk about [things] in context." And for the Christian, all talk of sin is circumscribed within a very specific one—that there exists a being "who can forgive everything, forgive all and for all, because he himself gave his innocent blood for all and for everything.” Those words are taken from The Brothers Karamazov by Dostoevsky, an author whom, we learn, the pope "love[s] very much." This basic idea has, moreover, been a repeated teaching of the Franciscan magisterium: "God is greater than sin" (in the America interview); "the forgiveness of God is stronger than any sin" (in the La Repubblica letter). But for neither Francis nor Dostoevsky is there ever a hint of "cheap grace" in any of this. "Shame is a true Christian virtue," Francis once said in an early-morning homily. "Love in action is a harsh and dreadful thing compared to love in dreams," as Dorothy Day (another Dostoevsky fan) was fond of quoting from The Brothers Karamazov.

In Antonio Spadaro's remarkable interview, Francis identifies with Caravaggio’s St. Matthew the tax collector: "That's me. I feel like him... Here, this is me, a sinner on whom the Lord has turned his gaze." This is true humility, the same humility we see in a different tax-collector in the gospels—the one in the Temple, crying out 'God, be merciful to me, a sinner!' (Lk 18:9-14). Only the one who truly feels in need of mercy can announce, with joy and relief, that "the grace of our Lord overflowed for me with the faith and love that are in Christ Jesus" (1 Tim 1:14). This is the "good news"—what Francis means when he talks about "the first proclamation...the proclamation of salvation," that which "there is nothing more solid, deep and sure."  And this, for once, really is a headline-worthy bombshell, no less now than it was almost 2,000 years ago.

Stephen Bullivant is Senior Lecturer in Theology and Ethics at St Mary's University College, England. His books include Faith and Unbelief (Paulist Press, 2014) and The Oxford Handbook of Atheism (OUP, 2013).