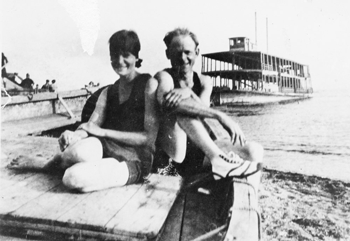 Generally speaking,” Robert Ellsberg writes in the November 15 issue of America, “there is not much to say about the sex lives of saints.” So that is why Dorothy Day’s letters to her lover Forster Batterham are so surprising. They show the flesh-and-blood passion of a woman who many Catholics believe will someday be declared an exemplar of the faith.

In her memoir, The Long Loneliness, Dorothy described her relationship with Forster, the man she called her 'common-law-husband,' and how the birth of her daughter Tamar in 1926 prompted her conversion to Catholicism in 1927. Because Forster would not agree to get married, Dorothy felt they had no choice but to separate. But as the following letters demonstrate, she remained in close touch with Forster over the next five years, expressing her ongoing love, and continuing to hope that he would give up his 'pigheadedness' and agree to marry her.

These letters are taken from All the Way to Heaven: The Selected Letters of Dorothy Day (now available from Marquette University Press).

I have been trying all week to write this letter and it is almost impossible for me to write it now. You make it much harder when you are kind to me. But we can’t go on in any but a friendly relation and I suppose you will say we can’t even have that... It is terribly hard to even mention my religious feelings to you because I am sure you do not think I am sincere. But it is not a sudden thing, but a thing which has been growing in me for years. I had impulses toward religion again and again and now when I try to order my life according to it in order to attain some sort of peace and happiness it is very hard but I must do it. Because even though it is hard, it gives me far more happiness to do it, even though it means my combating my physical feelings toward you. The strength of our physical attachment never led you to make any sacrifices or capitulations of your principles. You were always very hard about maintaining your independence and freedom. You would never marry even when I begged you to some years ago. And you always held yourself somewhat aloof from me. It is only now when I wish to give you up that you hold on to me...

I do not see why we can’t be friends, but if you insist on not being friends with me, I’ll just have to put up with it, no matter how unhappy it makes me. After all, the present unhappiness is not unbearable because I at least have the peace of knowing that I am doing what I think is best. And it’s a bearable unhappiness because it has in it none of those horrible resentments I had toward you last year so often.

Please do not be angry at me. You know I love you and as a matter of fact always did love you more than you loved me.

....I have told you again and again that you would be involving yourself in nothing if you married me. I assure you of that because you mention in one of your letters “who knows what entanglements you would drag me into? Etc.” You would of course have to agree to allow the children to be raised Catholics, but the ceremony is as simple as that of going before a justice of the peace. Religion would be obtruded on you in no way except that you would have to see me go to church once a week, and five times a year on various saints’ days. I would have nothing around the house to jar upon you,--no pictures and books.

I am really not obsessed as you think I am. You might say that far more about my writing. And I would try my best to understand your irritation with me just as you had to put up with my irritation of you when you were mildly obsessed with fishing and stamp collecting.

But I suppose it is no use. No use at all of going over these old arguments.

The baby speaks of you often, and only the other day she gave me a sweet fervent kiss and said “Forster kisses you like that.”

...I just got Tamar to bed. She has the most angelic disposition. With all the dragging around she remains cheerful, and only shows her fatigue by becoming obstreperously lively. As for me, I’m as blue as indigo. I told you it was much harder for those who went away than for those who stayed. I have felt nothing but a blank loneliness since I left you. Life is indeed a most miserable affair. Why don’t you become reasonable or indulgent or whatever you want to call it and tell me to come back and marry you? We could be so happy together. And even if we fought it would be better than this blank dead feeling. You know I love you and it isn’t just loneliness which makes me long for you so....

All my love,
Dorothy

....I do love you so much, sweetheart, and miss you more than I thought possible. Even if we weren’t together before, I at least had hopes of seeing you, and knowing you were there. Now, God knows when I’ll see you again. Can’t you realize how much happier we’d be together, in spite of differences of opinion, than we are apart?....

Well, perhaps someday I can bulldoze you into marrying me. I certainly don’t want to ever marry anybody else. Do I have to be condemned to celibacy all my days, just because of your pig-headedness? Damn it, do I have to remind you that Tamar needs a father? And you needn’t think I’m sentimental, because I’m not. She keeps asking after you,--and you know how she loves you.... I won’t talk about this any more. It’s foolish to, and I’ve talked enough about it. But you know that no matter how miserable or lonely it makes me, I can’t ever be with you again,--to live with you.

Do write to me dearest sweetest, because I think of you and want you night and day.

All my love,
Dorothy

....I wish you would give in. I can assure you I would not bother you and your own opinions in the least as long as you granted me religious liberty,--that is, me and the numerous other children we’d have. I haven’t been writing because of the seeming hopelessness of it all, but perhaps it shows a lack of faith in miracles to be so hopeless. Anyway, I do miss you terribly, and I want nothing more in life than to be with you again. Tamar frequently mentions you in her monologues, as her Forster father, so that it sounds as though she had adopted you rather than that you produced her...

My feeling about our night together was one of sadness because we couldn’t be always together. I feel that Tamar and I belong to you and when I am with you in that way it leaves me with a feeling of our close presence in my heart for weeks afterward.

Aren’t we ever going to be together again, sweetheart?... What do you say you marry me when I come up in the spring, and then I’ll sell or rent the house and we’ll come down here to live? Huh?...

I know how hard you are working, but write when you can, dearest.

Much love from us both,
Dorothy

I got your letter Friday afternoon and I’ve been pondering since whether or not to answer it. It doesn’t seem much use, but still I can’t let some of your statements go without telling you what I feel....

Sex is not at all taboo with me except outside of marriage. I am as free and unsuppressed as I ever was about it. I think the human body a beautiful thing, and the joys that a healthy body have are perfectly legitimate joys. I see no immediate difference between enjoying sex and enjoying a symphony concert, but sex having such a part in life, as producing children, has been restricted as society and the Church have felt best for the children.

I believe that in breaking these laws one is letting the flesh get an upper hand over the spirit, so I do not want to break these laws.

St. Augustine says, “If bodies please thee, praise God on occasion of them.” And I feel no sorrow for all the joys we have had in the past together....

You think all this is only hard on you. But I am suffering too. The ache in my heart is intolerable at times, and sometimes for days I can feel your lips upon me, waking and sleeping. It is because I love you so much that I want you to marry me. I want to be in your arms every night, as I used to be, and be with you always. I always loved you more than you did me. That is why I made up with you so many times, and went after you after we had had some quarrel. We always differed on principle, and now that I am getting older I cannot any longer always give way to you just because flesh has such power over me....

It all is hopeless of course, tho it has often seemed to me a simple thing. Imaginatively I can understand your hatred and rebellion against my beliefs and I can’t blame you. I have really given up hope now, so I won’t try to persuade you any more.

Robert Ellsberg is the editor of All the Way to Heaven: The Selected Let

I was in high school in the 1950's when a teacher talked about Dorothy Day in the Newman Club.  We visited her New York office.  I have been an admirer of this remarkable laywoman ever since.  She had become my role model.  Alas I have not given my all as Dorothy did.  These letters reveal a woman who is spiritually strong.  She does not demand Forster live the Catholic social message or its tenents.  Her long loneliness is  similar to what most saints feel at times, and like those saints, they never lose faith in God, they do not surrender to their other side; they hold onto their inner faith, the hand of God giving them guidance even when they are searching for him and not hearing him.  To do what she felt she was called to do, there could be no Forster in her life.  Eventually she had to know that.