Searching for Christ in a comic book culture 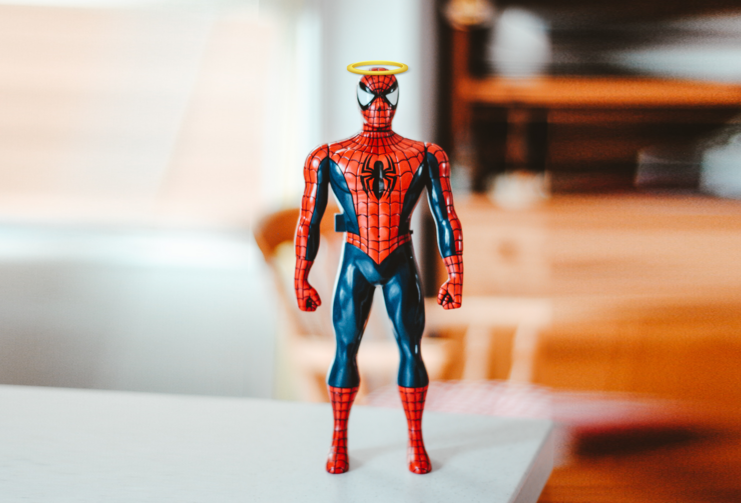 During a recent Q&A in a Catholic school, I asked the fourth-graders about their upcoming confirmation. One bright young lad said: “Jesus is so cool. He’s better than Superman.” No one in the class laughed or looked bemused at this suggestion. “I don’t think so,” I began, but before I could explain further, the young theologian excitedly interrupted. “No; you’re right, Father,” he said. “Jesus was human, so he is more like Batman or Iron Man, only better.” Considering the circumstances, having Christ come out as the best of the superhero bunch should be counted as a win.

While these famous Western, white and male superheroes have hit the cinematic big time, many other characters fill out the generic canon, including the Fantastic Four, Wonder Woman, Ghost Rider, Catwoman, Hellboy, the Hulk, the Punisher and the Spirit.

There is only anecdotal evidence of my claim that these superheroes are forming young people’s way of imagining Christ.

There is only anecdotal evidence of my claim that these superheroes are forming young people’s way of imagining Christ. Formal studies are yet to be done. And while I believe that the superhero mythology affects boys more than girls, we know that this film genre is an equal-opportunity attraction, and so it must be influencing girls in important though different ways, even by continuing the sexist stereotype of the female victim in need of a male rescuer. Wonder Woman does not seem to have had the same impact as Batman.

It would be a mistake, however, to think that superheroes are a new phenomenon. Greek and Roman religions had pantheons of gods with superpowers, a pagan heritage to which current-day superheroes owe a huge debt. The premise of the superhero is founded in Greek philosophy, especially that of the good vigilante who restores moral justice. Aristotle said in his Politics, “There are men, so godlike, so exceptional, that they naturally, by right of their extraordinary gifts, transcend all moral judgment or constitutional control. There is no law which embraces men of that caliber: they are themselves law.”

Yet it was Victorian and Edwardian novels that gave birth to the present movement. Robin Hood and the Scarlet Pimpernel were among the earliest modern adventurers, followed by Zorro and Tarzan, to name but two. In the 1930s and 1940s, the three greatest modern superheroes were invented: the Shadow, Spider-Man and Superman.

Superheroes share a number of common traits. Apart from their special powers, several also have a secret weapon (like a lasso, webbing or a shield). Starting with an extraordinary birth narrative, they feel a personal vocation to achieve their destiny by defending the common good. Their real identity is often hidden, but in public they wear distinctive clothes and use a symbol as a calling card. Their profound moral codes see them pursue the guilty, though many innocent people are sacrificed in their quest to eliminate evil. Often they work as loners, have access to unknown funds, and their public reception can be mixed—from adoration to misunderstanding to repudiation. Here we can start to see some parallels with the Gospels.

Take what the most recent Superman film has made of his legend in comparison to Jesus. Superman is stabbed in the side with Kryptonite; Jesus is stabbed with a spear. Superman, when dying in a hospital, vanishes from sight to live another day; it is not unlike Jesus’ empty tomb and post-Resurrection appearances. Superman hovers above the earth in a cruciform pose; Jesus comes to earth and is lifted up on the cross. Superman is cradled in his mother’s arms in a pose borrowed from Michelangelo’s “Pietà.” Superman is sometimes called “the people’s savior” by a police chief or a mayor; Jesus is “Savior of the World.” Superman is often shown bearing the weight of evil actions or their outcome on his shoulders. Indeed, in “Superman Returns” he carries the metal globe that sits atop the Daily Planet building. Jesus bore the burden of sin though his torture and death.

Both Superman and Jesus, moreover, were sent to our world by an all-powerful father to show us the light and save us from destruction. Both reveal their powers in miracles, but even death cannot contain them; they rise to continue their mission.

As Christians, we cannot claim these parallels just for ourselves. There is a strong case to be made that one of Superman’s creators, Jerry Siegel, saw him as a contemporary messianic figure. Superman’s father’s name, Kal-el, is a play on the Hebrew word for “voice of God.” In either case, it is no wonder that some secularized fourth-graders are confused about where and how Jesus fits into this pantheon.

So can we use the superhero genre to our advantage when speaking and teaching about Jesus? Perhaps.

First, it is important to keep underlining for young people that Jesus is not a fictional character. Tacitus, Pliny the Younger and Josephus, in texts independent of the New Testament—somewhat contested though they may be—establish that Jesus of Nazareth was born, lived and was put to death.

Second, Jesus is not the “best of a good lot,” superhero or otherwise, for those who believe in him. Rather, Jesus is the definitive revelation of God for the world. As Christians we hold that to see Jesus in action is to see God in action. Therefore God, in and through Jesus Christ, is a departure from what had come before. There is no death, destruction, retribution or vengeance in Jesus. In its place he offers us healing, reconciliation, challenge, forgiveness, love and sacrifice as signs of the reign of God.

While one of Jesus’ titles in earliest Christianity was the Divine Magician, in the New Testament “sign faith” is the weakest of all faiths. “How blessed are those who have not seen but believe,” Jesus told St. Thomas. Signs draw attention to themselves, and people can end up believing in “the power,” but Jesus wanted people who saw the signs to experience the love of God and come to believe in the Father. To borrow one of the best lines from the recent film “Bruce Almighty,” “You want to see a miracle, son? Be the miracle.”

One of the most important things the superhero genre helps adults to grasp is this: In an increasingly visual culture, iconography matters.

Jesus has at times has been pictured and spoken of as fighting with one arm tied behind his back in the cosmic battle between good and evil. But his special weapons are of another sort. In some early church writings we are told that the model Christian wears the belt of truth, the breastplate of justice, the sandals of peace, the shield of faith, the helmet of salvation and the sword of the Spirit, God’s word. While Jesus’ weapons are portrayed as similar to those of other heroic crusaders, the immediate effects are of a different order. Captain America, eat your heart out!

Third, Jesus saves us from the forces of evil and destruction, but we are not passive in our salvation, as are the beneficiaries of the intervention of the superheroes. While amazing grace is unearned and undeserved, it is not forced upon us. We can reject faith and hope and love. And we are not saved by Jesus the way Batman saves the citizens of Gotham City. Rather, we are invited to enjoy the saving love of God in an ongoing relationship with the Father, the Son and the Holy Spirit.

Despite the parallels between the literary device of Mark’s “Messianic secret” in regard to Jesus and the secret identity of a host of superheroes, we followers of Jesus are called not to be secretive, but to be prudent. We have personal faith, but we are not private believers. We share in Christ’s mission to the world.

One of the most important things the superhero genre helps adults to grasp is this: In an increasingly visual culture, iconography matters. We should conduct an inventory of our homes, classrooms and churches to see that the images of Jesus we provide, not only for our young, are consonant with showing that (with due respect to St. Irenaeus) the glory of Jesus’ divinity is revealed in his humanity fully alive. Jesus is the definitive hero whose superabundance of life should be so clear that he leaves the fictional competition in the shade. Reclaiming Jesus in that light might mean that the homespun robe will return as the coolest costume ever.

Richard Leonard, S.J., is the director of the Australian Office of Catholic Film & Broadcasting and the author of Movies That Matter: Reading

Kal-El is Superman's Kryptonian name.  Jor-El is his biological father.

Kal-El is Superman's Kryptonian name.  Jor-El is the name of his father.

One interesting observation is the parallel of the language used by the Joker in the "Dark Knight" Batman movie and that of the Misfit from the story "A Good Man Is Hard to Find" by one of our country's greatest writers, Flannery O'Connor, who was also a devout Roman Catholic.  When he is under interrogation in the local jail, the Joker initiates a dialogue with one of the detectives, asking him, "How many of your friends have I killed?"  He continues by explaining why he prefers killing his victims with a knife instead of a gun: "You see, in their last moments, people show you who they really are. So, in a way, I know your friends better than you ever did."  In a similar fashion, the Misfit in O'Connor's story knows the Grandmother better than any member of her family as her life is balanced in his hands.  In spite of his complete depravity, the Misfit illustrates his recognition of the Grandmother's condition, and indeed the human condition, in one of his final lines in the story: "She would of been a good woman if it had been somebody there to shoot her every minute of her life."  It is fascinating how often O'Connor's approach to revealing the moment of grace in her fiction is now mirrored in popular culture, including superhero movies.  Such films may not provide us with an adequate analogy to Christ, but their themes and language certainly can invoke concepts that are central to Christian doctrine.