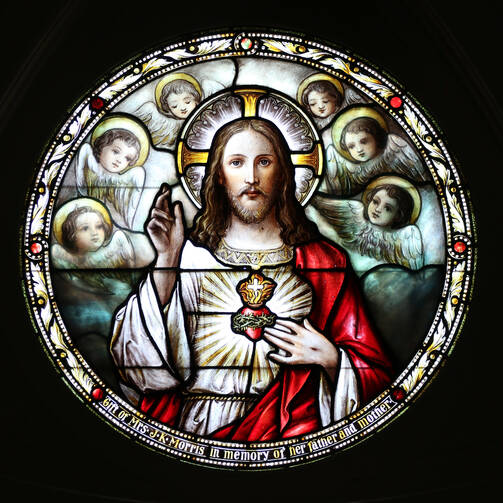 Seventy-two times a minute. 4,320 times an hour. 103,680 times a day. Almost 38 million times a year. Over 2.6 billion times in the course of an average life. Fist-sized, the human heart beats powerfully and durably. It must be sturdy enough to contract and send fresh blood throughout the entire body, elastic enough to collect spent, deoxygenated blood. Too much hardness or softness of heart, and one dies. Only a healthy heart, strong and supple, can give and receive lifeblood.

Devotion to the Sacred Heart of Jesus has suffered cardiac arrest in recent decades. It has been dismissed as superstitious in its apparent guarantee of salvation to those who practice it, as masochistic in its emphasis on making reparation for Jesus’ own suffering. Its popular iconography is, to put it generously, saccharine, kitschy, effeminate, somehow ethereal and grotesque at once. This decline of devotion is all the more striking because of its pre-eminence in the first half of the 20th century, when so many Catholic families had a picture of Jesus and his Sacred Heart displayed in their homes, and when Thursday night holy hours and first Fridays proliferated in parishes.

The Sacred Heart is an invitation to ask ourselves, ‘How did Jesus love?’
James Martin, S.J.

Like many forms of heart disease, such atrophy could have been prevented through a healthy diet: in this case, Scripture and tradition. The heart is a powerful metaphor in the Bible, what Karl Rahner, S.J., has called a primordial word. It signifies the wellspring of life, the totality of one’s being. The prophet Ezekiel, for instance, records God’s promise to change Israel’s heart of stone into a heart of flesh, while John’s Gospel gives the heart its most profound scriptural expression: Jesus’ heart is the source of living water, of rest for the Beloved Disciple, of the church and its sacraments, of doubting Thomas’s faith.

Devotion to the Sacred Heart began to flourish in the Middle Ages through a renewed attentiveness to Jesus’ humanity and his Passion. Its golden age, though, was the 17th century, when the French School of Francis de Sales, John Eudes, Jane de Chantal and Margaret Mary Alacoque offered a tender, compassionate spirituality that helped to renew the church and counter Jansenism’s severity and sectarianism. From 1673 to 1675 at the Visitation convent of Paray-le-Monial, Margaret Mary received a series of four revelations from Christ about his heart. It was here that devotion reached its enduring form: personal consecration to the Sacred Heart, the observance of an hour of prayer on Thursday night between 11 o’clock and midnight as a way of sharing in Christ’s suffering in Gethsemane, and the reception of Communion on the first Friday of the month as reparation for the indignities inflicted upon the sacrament by those indifferent and ungrateful. This latter revelation would evolve into a belief that salvation was assured to those who received Communion on the first Fridays of nine consecutive months.

The Sacred Heart was later enlisted in combat against the French Revolution, Communism and threats to family life. Pope Pius IX made it a feast of the universal church in 1856, and Leo XIII consecrated the entire world to the Sacred Heart in 1899. The devotion reached its magisterial peak in Pius XII’s 1956 encyclical Haurietis Aquas (You Shall Draw Waters), which placed God’s passionate love for humanity at its center.

I believe that the deepest meaning of the devotion, however, is glimpsed in a poet who does not even mention it: Dante Alighieri. At the dark bottom of Hell, Satan is frozen in ice up to his chest, crying tears and drooling bloody foam, his six wings bellowing cold wind upward. Wedged into the inverted apex of the underworld, he is locked in his own resentment, impotent and utterly alone. Hell, the Inferno makes clear, is not fire, but ice: cold, crabbed isolation. Paradise is pure communion, illuminated and warmed by the love that moves the sun and the other stars.

I did not grow up with any devotion to the Sacred Heart, and it is only in the last few years, as I have struggled with vocation and the demands of family life, that the practice has spoken to my own heart: the fearful heart that paralyzes me when I think of the future, rendering me unable to open myself in trust to God; the cramped heart that refuses to admit my wife and infant son, but clings to my own prerogatives, choosing to watch Peter out of the corner of my eye as I read the morning newspaper rather than get on the floor and play with him; the oblivious heart that holds forth at dinner on the recording history of The Beatles’s Abbey Road, but forgets to ask Deborah how her class went that afternoon. At times like these I wonder, have I really let into my life those I love so much? Have I gone out to them? Are they part of my flesh or merely fellow travelers?

On a particularly difficult afternoon last summer, I took Peter for a walk. We wound up at a church in our neighborhood, and, almost unable to bear the despair and self-loathing that was consuming me, I went in to pray. I lit a candle before Mary for my wife and one for myself before Joseph. Almost accidentally I stopped in front of a wood-carving of the Sacred Heart. Caught somewhere between rage and tears, I looked up at the heart and, for the first time, saw beyond the barbed-wire crown of thorns encircling it, into its gentleness. A prayer rose up in me, Jesus, give me a bigger heart. I looked at Peter in shame and in hope, and I went out into the day.

The Sacred Heart is an invitation to ask ourselves, ‘How did Jesus love?’
James Martin, S.J.

I remain irritable and irritating. I continue to struggle with a stoniness that shuts out so many. I know ever more clearly my deep sinfulness. But in continuing to pray to the Sacred Heart, I have also come to know God’s still deeper mercy. I am strengthened by a heart pierced but unvanquished. I am welcomed by a heart that knows only tenderness and so makes me tender. I look on that pulsing, fleshy heart: courageous and vulnerable, compact and capacious, never one without the other.

Christopher J. Ruddy is an assistant professor of theology at St. John's College and the College of St. Benedict in Collegeville, Minn. He lives in St. Paul with his wife, Deborah Wallace, and their one-year-old son, Peter.