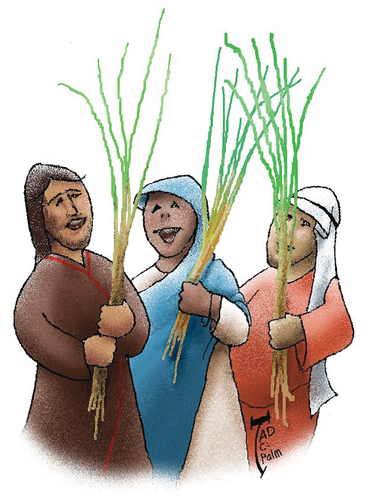 The palm branches of Palm Sunday are mentioned specifically in Jn 12:13, and both Mark and Matthew describe people placing branches and cloaks on the ground as Jesus rode into Jerusalem, celebrating his entry with rejoicing and hailing him as king. Luke, on the other hand, describes the same procession but says only that cloaks were placed before Jesus. There is no need to doubt the presence of palm branches as Jesus rode into Jerusalem, but it is worthwhile to consider the purpose and symbolism of the branches in order to understand why Luke omits them from his account.

In the Old Testament, palm branches symbolize joy. In Lv 23:40 and Neh 8:13-18, palm branches are associated with Succoth, the week-long harvest festival of booths celebrated as a joyous pilgrimage while the Temple was still standing. The palm branch could also be a symbol of victory. When the Maccabees took control of the citadel at the Jerusalem Temple, “they entered it with praise and palm branches” (1 Mc 13:51). The palm branch was used in similar ways by Babylonians, Egyptians, Greeks and Romans; and it was often a part of triumphant processions.

The themes of celebration and triumph are present when Jesus acts out the prophecy of Zec 9:9, in which the king rides into Jerusalem, humble and victorious, on a colt.

In the context of Jesus’ entry into Jerusalem, Luke stresses that Jesus knew and was in control of his destiny. Jesus also knew that his entrance into the city, feted by the crowds, was not the straightforward triumph that others might hope for. Still, the crowds celebrated Jesus, with people “spreading their cloaks on the road,” praising “God aloud with joy” and proclaiming, “Blessed is the king who comes in the name of the Lord.” All these are actions that evoke not just Zec 9:9, but the processions of Solomon and Jehu in 1 Kgs 1:32-40 and 2 Kgs 9:1-13. The crowds welcome the Messiah into Jerusalem with unabashed joy.

Luke is the only Gospel in which opposition is shouted to Jesus as he enters the city. Luke has certain Pharisees call out to Jesus: “Teacher, rebuke your disciples.” They reject the acclamations praising Jesus and welcoming him as the messianic king. They feel bold enough to say this to Jesus as he rides into the city, perhaps thinking he will calm his followers down. Jesus responds, “I tell you, if they keep silent, the stones will cry out!” Jesus’ words recall those of John the Baptist, who told the crowds coming to him for baptism not to presume upon the honor of birth, but to “bear fruits worthy of repentance,” for “God is able from these stones to raise up children to Abraham.” “These stones” represent not just the power of God over creation but the fact that even if some people will not grasp the reality of Jesus’ kingship and celebrate it now, all creation will someday acknowledge Jesus as Lord. This recognition, Paul says, will be universal, “so that at the name of Jesus every knee should bend, in heaven and on earth and under the earth.”

Those who waved the palm branches as Jesus entered Jerusalem welcomed in a king, though most could not have known the manner in which he would ascend to his throne. But why does Luke not mention the branches of victory and triumph? Perhaps Luke omits mention of the palm branches because the association of them with common expectations of victory and festivity seems out of place in the context of how Jesus will fulfill these hopes. Though all the Gospel authors have Jesus ride into the city in fulfillment of Zec 9:9, Luke might associate the palm branches with the true celebration of Christ’s victory. Zechariah 14 envisions all the nations in Jerusalem worshipping the king and celebrating Succoth, which includes the waving of palm branches. This image places Palm Sunday in religious and eschatological perspective: the entry into Jerusalem is a sign of Jesus’ kingship for those who will see, but not its final fulfillment.

This article also appeared in print, under the headline “Palm Reading,” in the March 18, 2013, issue. 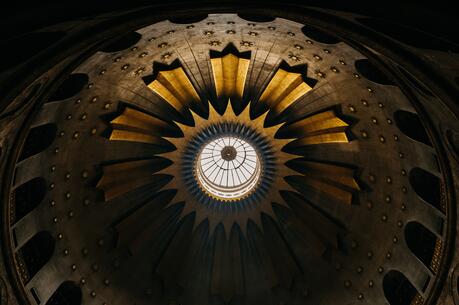 The spirit propels Christianity forward
Jesus emphasizes the selflessness of the shepherd, insisting that he volunteers to protect his flock.
Jaime L. WatersMarch 18, 2021 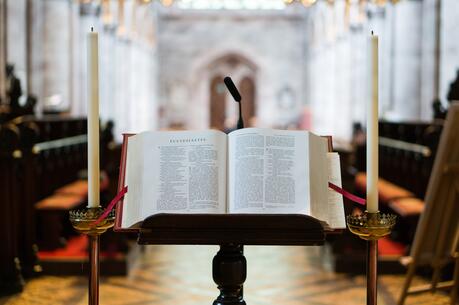 The Gospel is meant to be preached. It’s our responsibility to do it.
Jesus teaches the apostles by opening their minds to understand the Scriptures.
Jaime L. WatersMarch 18, 2021 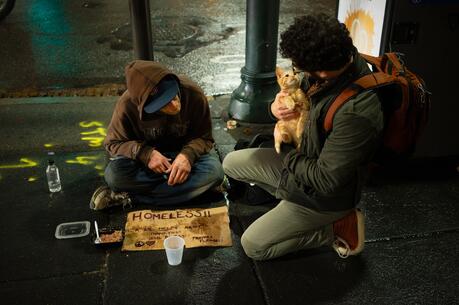 God calls us to redistribute not just wealth but mercy too
Divine Mercy Sunday reminds us to pray for God’s compassion and forgiveness and to afford the same to one another.
Jaime L. WatersMarch 18, 2021 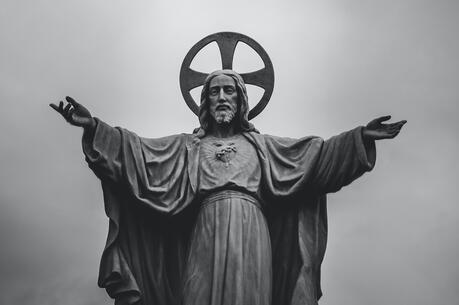 Jesus is risen, exclusion is dead.
The reactions of the early Christian witnesses are a mixture of fear, faith, confusion and understanding.
Jaime L. WatersMarch 18, 2021