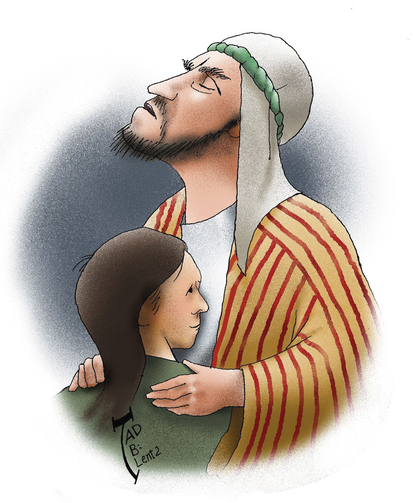 The first thing Abraham had to do was listen to God, but Abraham also had to be willing to hear God, no matter the word spoken. And the word Abraham first heard from God, the command to sacrifice his beloved son Isaac, remains even now at some level inconceivable and incomprehensible. Why would God ask Abraham to kill the child in whom the divine promises of Israel were embedded?

Yes, we know from the text of Genesis that it was a test. Abraham heard the voice of God and an outrageous request, yet the patriarch trusted God. This was a test for Abraham, not God, for God knew Abraham would obey, but Abraham’s willingness to listen would reveal the true nature of God.

The voice of God that Abraham heard was true both times. If Abraham had not heeded the voice of God initially, would he have realized that God had truly spoken a second time, when he told Abraham not to sacrifice his son Isaac? What if Abraham had listened to the first voice alone and rejected God’s directive to spare Isaac? Not only would Isaac have died, but the true nature of God would not have been revealed. There is no question that the mystery and unknowability of God are wrapped up in the narrative, but this challenging narrative demonstrates Abraham’s willingness always to be attentive and obedient to God’s will.

We do not know how fearful Isaac was or if he understood what was taking place. Ancient and medieval Jewish commentators like Philo, Josephus and Rashi proposed that he might have been 7 years old or 25 or even 37 when the Akedah took place—but when Isaac calls out “Father!” and asks where the lamb is for the burnt offering, Abraham remains faithful saying, “God himself will provide the lamb for a burnt offering, my son.”

Abraham’s faithfulness rained down God’s blessings on him, for God said to Abraham, “Because you have done this, and have not withheld your son, your only son, I will indeed bless you.” Yet Abraham’s obedient listening had an impact far beyond his own family and people, for he was also promised that “by your offspring shall all the nations of the earth gain blessing for themselves, because you have obeyed my voice.”

Jesus, too, always heard the voice of God the Father and remained obedient to it. For Jesus, the threat of sacrifice went beyond Isaac’s questioning to the reality of Calvary, yet Jesus trusted that God, “who did not withhold his own Son, but gave him up for all of us,” will always, as Paul says, be “for us.”

Still, when Jesus in the Gospel of Mark told his apostles that he must suffer and die, Peter rejected Jesus’ word outright, even though Jesus’ narrative of suffering concluded with the resurrection. Peter and the other apostles rejected God’s way of suffering and sought the glory that they knew was the essence of God. And it was. For “six days later, Jesus took with him Peter and James and John, and led them up a high mountain apart, by themselves. And he was transfigured before them, and his clothes became dazzling white, such as no one on earth could bleach them.” These chosen apostles stood in the midst of glory, terrified, and heard, like Abraham, the voice of God: “This is my Son, the Beloved; listen to him!”

But the God who showed them a vision of heavenly glory and spoke to them out of the glory was the same God who spoke to them when Jesus said that he would suffer and die. When you listen to God, you do not get to pick just the “good stuff,” the words that appeal to you: God asks that you listen always.

But trials, tests and suffering are not the end of the story. Paul asks us in Romans, “What then are we to say about these things? If God is for us, who is against us? He who did not withhold his own Son, but gave him up for all of us, will he not with him also give us everything else?” The end of the story is God’s glory, but it requires hearing God’s voice in the midst of trials, suffering, pain and loss, even when it seems to be God’s voice commanding the suffering. Be patient and listen again, for the voice of God desires only our blessing.

Show Comments (
4
)
Comments are automatically closed two weeks after an article's initial publication. See our comments policy for more.
Chris NUNEZ
5 years 4 months ago
This reading has to be understood from the heart and mind of the child. For too long the initial willingness of Abraham to take the child up with the intention of 'obeying' the large voice has been problematic. Even among the Rabbis of the Middle Ages, this story was a source of scandal. The two voices seem to represent that there are two choices, and Abraham is the one who listening to 'the smaller voice' chooses life for his son. But imagine being a child hearing this story, and how it reinforces the kind of psychological and physical abuse to which children are subjected. The child hearing this story would assume that their parents have the right even to take the life of their child, and doubtless to beat the child. No, this story is about, and should be treated as the choice that Abraham makes for his child, to refuse the 'big powerful and booming voice' and favor his child. How much more would it mean to consider that the 'big voice' is countered by that 'small voice' -- like a conscience that comes from 'inside' the source of 'the law written in their hearts.' I must reject the traditional interpretation of this reading, and Paul's interpretation. It's time to read and hear this story from the perspective of the child, the one who has no voice, only the question "Father..." where is the lamb? If we cannot see Isaac as a symbol of the innocent scapegoat who must be rescued, set free then we have not understood this story. A faith or culture that continues to accept this story as the 'obedience' of Abraham needlessly perpetuates a flawed understanding of 'the law.' Obedience to 'the law' is obedience to the law of love, and that is what Abraham has obeyed, the voice and law of love.
John Martens
5 years 4 months ago

Thanks for your comment. I think you raise serious points, some of which I tried to deal with in the column. There are always constraints of space, so any commentary will miss important aspects of the text. Here is one of the main reasons I focused on the Akedah as a test of Abraham: "God put Abraham to the test" in the first verse of the passage. There is something that cannot be ignored about that.

As to Isaac, what I have in the column is only a bit of what I originally had, but to develop it would have drawn the column away from the Gospel reading or made it much too long. Too long is not an option with these columns. Ultimately, there is no good way to know Isaac's age  when such an event was supposed to have happened; as I wrote "commentators like Philo, Josephus and Rashi proposed that he might have been 7 years old or 25 or even 37 when the Akedah took place." I think there is nevertheless a fruitful and warranted focus on Isaac that might emerge, which I tried to indicate, but decided that I could not develop.

Finally, this event points away from child sacrifice and God's desire for such sacrifices, as you indicate. I think that was clear in the column.

Chris NUNEZ
5 years 4 months ago
G'day John Martens, thanks for your response. I understand space constraints when writing. I always run over by 200 to 500 words for our local op-ed in the newspaper. So I actually feel very positive that America has this wonderful 'reader response' option so that curmudgeons like me can 'talk back.' As I've been preparing for March (Juvenile Justice Month) I've been looking at these readings, and it struck me that this reading -- The Akedah -- is the very first reading. So I've gone back to review a handful of commentaries on this one especially. The driving idea that 'tied it all together' for me was, 'Are we willing to sacrifice our children, the future, to Big Voices?' Thanks for the shout back, appreciate it! Pacem.
Todd Fetherston
5 years 4 months ago
Thank you for your article. From various commentaries I have read I have come to believe that Abraham was misguided into thinking that his God would want no less than the Canaanite gods--Abraham himself would give no less than his Canaanite neighbor--his first born and only son! To interpret this any other way reduces God to a cruel tyrant, playing heartless and manipulative games. I see the 'test' that Abraham put to by God as the same discernment process we are all called to. What separated Abraham from others was his perseverence to actually hear the word of God--cutting through filter/lense of culture and bias. Just my humble opinion.
Advertisement

This article also appeared in print, under the headline “Hearing God Speak,” in the February 23, 2015, issue.

Can scripture help us determine who to vote for?
We can pray that our leaders seek wisdom and understanding, but we must also exercise our right to vote for those who have demonstrated these qualities.
Jaime L. WatersJune 26, 2020

Can scripture help us cope with despair?
We must struggle together to deliver the society we want to see.
Jaime L. WatersJune 26, 2020

How the parable of the weeds compels us to fight for justice
Telling people suffering victimization to wait for a future reckoning only does further harm and fails to promote God’s kingdom.
Jaime L. WatersJune 26, 2020

Why you should pray to God, especially in times of need
Romans takes notions of physical burdens of the flesh and calls for believers to focus instead on the Spirit of God within them.
Jaime L. WatersJune 12, 2020